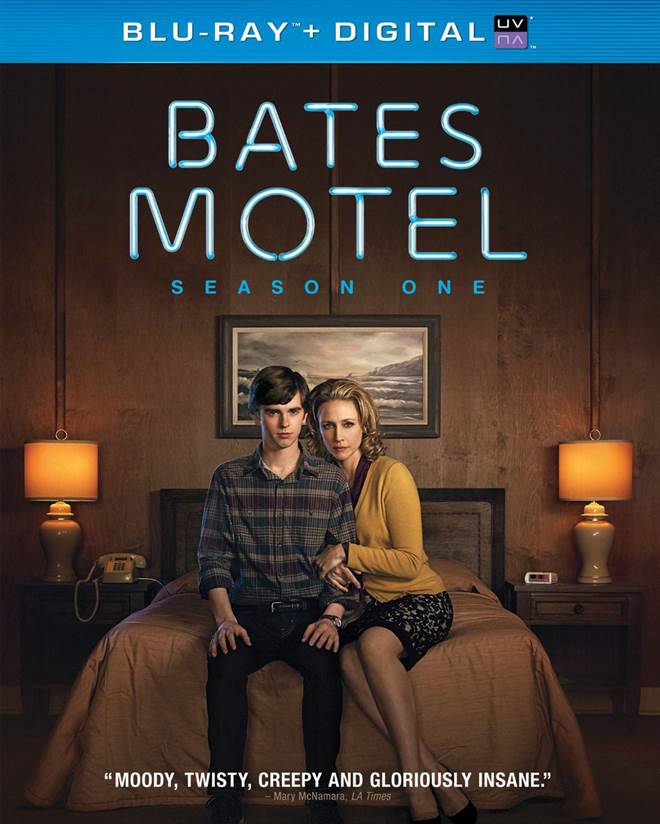 Wow we had some great television and cable programs this past year and hopefully more to come.  Looking over the list so far however, one stands out as the most decadent drama of the year thus far.  The very eerie, well acted Bates Motel takes a classic horror film from Alfred Hitchcock and brings together a prequel that matches, no surpasses Psycho with scenes so diabolical that even American Horror Story plays second fiddle.

The plot involves Norma Bates (Vera Farmiga) who leaves the town where her husband was killed to settle in the sleepy seaside village of White Pine Bay to escape a remorseless past. She buys a rundown motel on the edge of town that includes a daunting three story vintage house.  She moves in with her teenage son Norman (Freddie Highmore) to begin her new life operating a business perfect for the popular fishing area.

It's not too long after settling in that she gets a visit from the previous owner who feels the property still belongs to him.  His tough persona doesn't frighten Norma, but his persistence does scare her a bit.  One evening the man attacks and rapes Norma in a fit of rage, but Norman intervenes.  So starts a story of murder, suspense, lies, cheating, sex for sale, perversion and sadistic horror so mesmerizing that you won't want to miss one minute of the 466.

The fine acting by Farmiga and Highmore make the show work.  They build their interesting characters at a fast clip giving viewers a chance to like them, then with twists and turns in the plot the sinister side of Norma and Norman become evident.  Norma shows the persistence of a confident fighter, getting up after every knockdown.  She's determined to make a life in the town even if she has to fight city hall and the local degenerate Deputy Zack Shelby (Mike Vogel) and a very menacing Sheriff Alex Romero (Nestor Carbonell).

Norman wants a normal life even though he has something that's horrible hidden way back in his brain about his past.  He wants to be part of the high school click and gets a chance when he befriends one of the popular girls in his class.  Highmore makes a great Norman, moody, strange and yet likable.  He's smart and that helps his getting in with the nerds at school as well.  But, when his older brother Dylan Massett (Max Thieriot) movies into the house, he starts interfering with Norman's everyday life.

Creator Anthony Cipriano co-wrote all 10 episodes of Bates Motel keeping to the evolution of the Norman Bates character that ends up in the classic horror flick Psycho. Looking to season 2 it will be very difficult to overshadow this past season with its many twists and interesting character development.  With all that's happened in season one to keep weekly viewer's attention it's hard to fathom there's story enough for another season.

The Blu-ray plus digital combo pack has some deleted scenes and the Paley Center panel discussion with the cast and creative team of Bates Motel.  The panel includes writers Carlton Cruse and Kerry Ehrin along with actors Vera Farmiga, Olivia Cooke, Freddie Highmore, Nicola Peltz, Max Thieriot and Nestor Carbonell.  The panel talks about their roles, how they were chosen and specific episodes during the special feature.

The video quality is extremely good and as good as if you saw the original series on HD Television.  The original format of 16x9 with an aspect ratio of 1.78:1 that fills the whole screen make for the presentation I love the most.  No bars top and bottom as if you are peaking into a ‘letterbox'.  All the terror and horror are projected nicely, even the night scenes that make up a good portion of the series.

The sound quality using the DTS-HD Master Audio 5.1 provided or just from your television speakers using available audio is very good.  The transfer to Blu-ray is nicely done with no distortion and easily understandable dialogue.  If you turn on your surround sound you may even get a little extra depth to give you the feel of being on the set.

Bates Motel has not been rated but contains violence, gore, sex, rape, brutality, teen drinking, drug use and a scene of sex slavery. Be cautious when deciding to allow immature children see the show as the adult content may be inappropriate depending on their age.

FINAL ANALYSIS: Among the best dramas on television this year. (A)