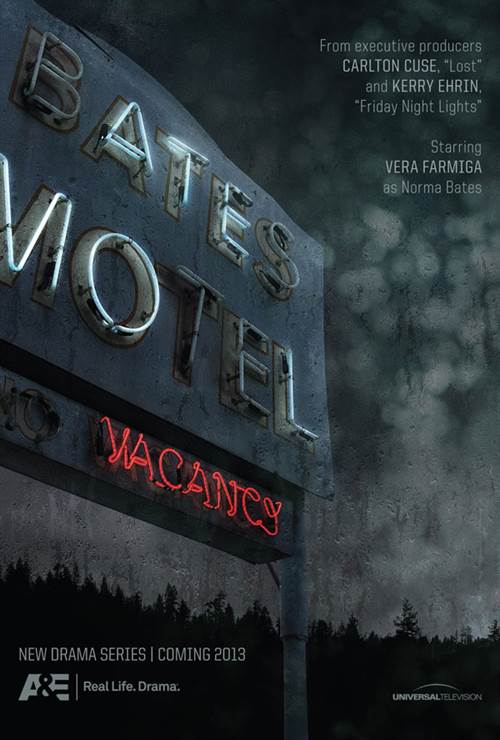 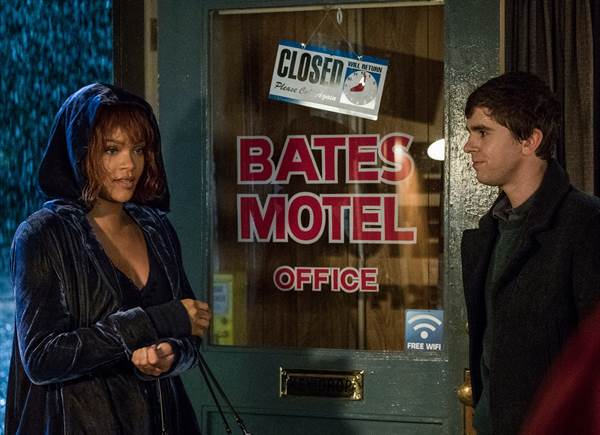 © Universal Television. All Rights Reserved.
"Bates Motel," inspired by Hitchcock's genre-defining film, "Psycho," is a contemporary exploration of the formative years of Norman Bates' relationship with his mother, Norma, and the world they inhabit. Viewers will have access to the dark, twisted backstory and learn firsthand how Norma helped forge the most famous serial killer of them all.

Download Bates Motel in Digital HD/4K from the iTunes store. 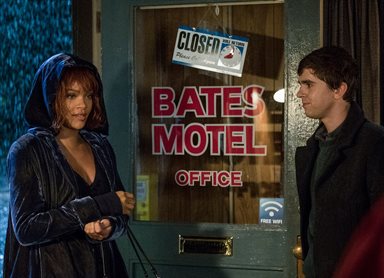 But first, you must remember the past, for if you don't, History will inevitably repeat itself.

If you haven't seen the end of Season 4, Spoiler Alert! Turn back now and get your butts back to watching the rest of season 4! You have less than 24 hours to get caught up!

Season 4 ended with the death of Norman's mother (which if you saw Psycho…we all knew was coming!) in beautiful fashion. Fiancée and Pissed off Sherriff Alex Romero clocked Norman in the face at his mother's funeral and then got arrested for perjury shortly afterward. Chick visited Norman, just after he un-buried his mother & glued her eyelids open, to see if he was ok and give his the sage advice of "You do what you have to do, but you do understand she's dead…right?" (Who knew Chick could have stopped what's about to happen right there! Alert the authorities Chick!!!). And of the whole Bates family, Dylan & Emma got the hell out! They were the smart ones. But will they stay that way?

It's very impressive what creator/writers Anthony Cipriano Kerry Ehrin & Carlton Cuse have done with the characters from this Robert Bloch novel "Psycho"! In the iconic film we watched Anthony Perkins play the role of the mentally disturbed Norman Bates for the first time in Alfred Hitchcock's classic horror film "Psycho". "Psycho", filmed in black & white gave us, what can arguably be, the most iconic horror scene in motion picture history. Everyone knows about the shower curtain scene in the 1960's Classic "Pyscho" with Janet Leigh playing Marion Crane who meets her fate on that cold bathroom floor. Alfred Hitchcock took "Psycho" and that scene into cinematic history. In fact, they even instituted a policy that no one would be allowed into the theater after the film started, insuring each viewer would see this production in entirety just to make sure patrons wouldn't miss it. "Pyscho" then inspired sequels in 1983, 1986, 1990 and a fully remake by Gus Van Sant in 1998. Then in 2013 Anthony Cipriano Kerry Ehrin & Carlton Cuse took Norman Bates to TV and changed the whole outlook on the Bates family. We got to see Norman as a troubled youth with many issues. A controlling and yet loving mother who always interferes. But what's best about the series is watching Norman slowly loose his mind.

Over the years I got to talk with Freddie Highmore about his character and he always seemed to see Norman not as an evil character at all. But how does he get that far into character? Freddie Highmore before Bates Motel was Charlie Bucket from the Chocolate Factory! Peter Llewelyn Davies from "Finding Neverland", Jared Grace from "The Spiderwick Chronicles" and Evan Taylor from "August Rush"! when I first heard the casting I was like "SERIOUSLY???"  and yet Freddie Highmore has not only succeeded at bringing Norman Bates to tv, he created his own iconic version of the character. As Heath Leger took Joker to another level, Freddie Highmore has taken bates into the darkest realms of our mind and as I told him the last time I saw him, After playing such a dark role for so 5 years….you need to lighten it up already! Do a romantic comedy next!

But not before season 5 is done.

So getting back to the case at hand. We have a series that's made after material in an iconic film that we all saw. Will they go there? Will the writers and directors take on the famous shower scene? Let's just say with the announcement of Rihanna playing the role of Marion Crane, its very likely! Will it play out the same way…I can almost assuredly tell you it will not. If there's anything these great writers can do is spin this story on its head and keep us all guessing.

I won't say much about the opening of Season 5. I hate spoilers! I don't even like watching trailers. But I will tell you that Season 5 starts with a time jump. Sherriff Romero is in serving time in prison. Vera Farmiga is the most beautiful & disturbing, dead woman on TV, Emma and Dylan are in Seattle safe and sound with a twist…and Norman… Let's just say shits about to get real!

Don't get left out of what may be the best final season of a series on cable television.

If you haven't seen Bates Motel from the start….start binging it! You have 50 episodes to catch up on!

But this Monday, if you're up to date, the final season starts, and boy, I can't wait to see what they do with this final season!