The show itself is dark, and accurately portrays Gotham as a town overrun by various mob organizations. I was definitely left wanting more and the series finale leaves you hanging on the edge of your seat. 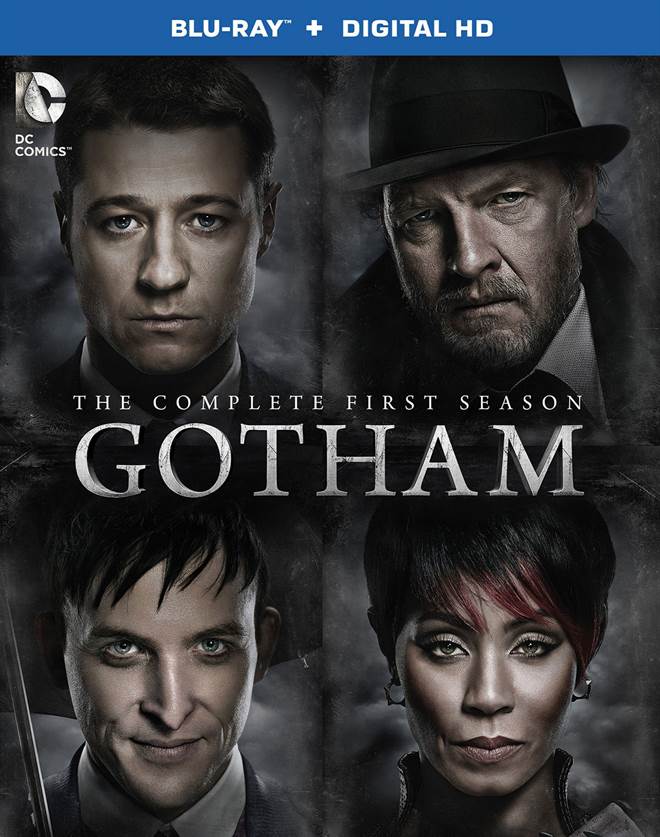 Purchase   DVD/Blu-ray/4K UHD
The character of Batman has been one of the most popular comic character since he emerged onto the comic book scene back in 1939.  Since then, we have seen many incarnations of Batman in print, television, and film; some comical, some dark and serious. Gotham brings a whole new dissection of his story to life.

The show, which airs on Fox, premiered on September 22, 2014 to much anticipation and critical praise. It stars an impressive cast, including David Mazouz as Bruce Wayne, Ben McKenzie as James Gordon, Donal Logue as Harvey Bullock, Robin Lord Taylor as Oswald Cobblepot/The Penguin, and Jada Pinkett Smith as Fish Mooney.

With this new series, we go back to the time when Bruce Wayne was still just a young boy; a young boy being thrown into a world of grief. We see the early days of James Gordon's career and his meeting of the young Wayne boy after the murder of his parents. The show is essentially a vehicle to delve deeper into the backstory of Wayne and Gordon, but also shed light on the origins of several villains as well - Penguin, Riddler, Catwoman, Joker, Poison Ivy, Scarecrow, Hugo Strange, Two-Face, and Mr. Freeze.

Presented in 1080p/AVC the video presentation is flawless. No artifacting, or aliasing can be found. The picture is crisp with perfect color hues as well as blacks. Complimenting the video is audio presented in DTS-HD Master Audio 5.1. The dialog track can easily be heard over the special effects. Both combined easily envelop the rooms in a perfect sound that make you feel like you are actually inside Gotham City.

Included in the Blu-ray combo release is a plethora of special features that delve deep into the creation of the world of Gotham. The features include Gotham Invented: Building Our Gotham,  Gotham Invented: Paving the Way for the Caped Crusader, Gotham Invented: Fractured Villains of Gotham, Designing the Fiction, The Game of Cobblepot, Gag Reel, Unaired Scenes, DC Comics Night at Comic-Con 2014 Presenting Gotham, The Flash, Constantine and Arrow, Gotham: The Legend Reborn, and Character Profiles on the main cast

While I wasn't quite sure I would like the series at first, and despite the fact that there are quite a few character stories thrown at you for a first season, I began to like it quite a bit. The show itself is dark, and accurately portrays Gotham as a town overrun by various mob organizations. I was definitely left wanting more and the series finale leaves you hanging on the edge of your seat. Fortunately, us fans won't have to wait too long, as the new season begins in just a couple of weeks. I look forward to seeing where the story-lines go from here.