What makes Gotham so great is it’s writing and how well they are able to create in-depth storylines with so many characters. 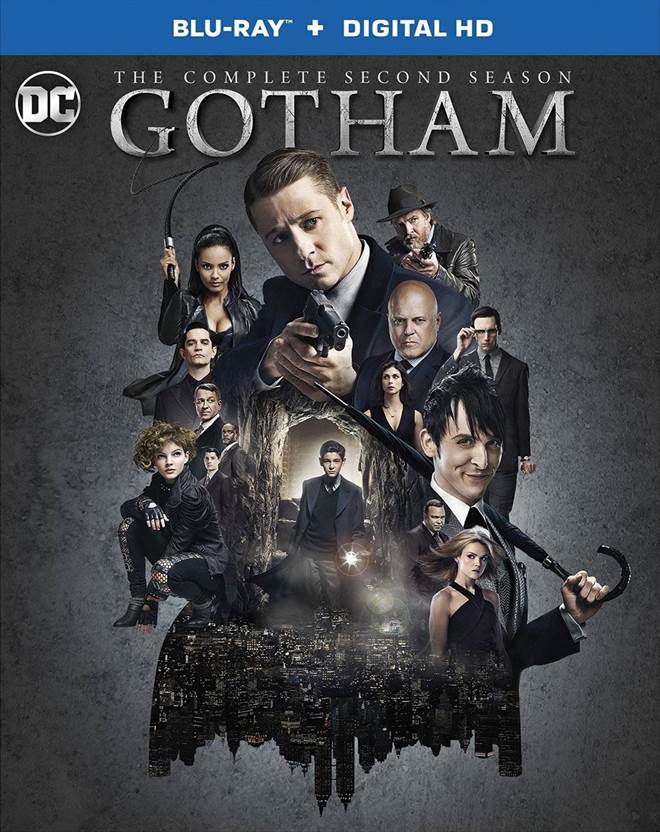 The Real DC Competition would be the battle of Gotham VS National City!

If you're looking for more than just CGI effects in a 2 hour, depressing, "my mother's name is Martha too let's be friends" fest… then you need to be watching DC on TV, because the television DC Universe is HANDS DOWN beating the Cinematic Universe!

Rise of the Villains

Do I need to say more? Really? If you're a DC fan, you must be watching this already, and If you haven't, you need to push it to the top of the short list!

At the end of season one, Penguin pushed Fish Mooney off a cliff to her doom, Edward Nygma was slowly losing his mind and Bruce found his father's secret room behind the fireplace.

Gotham Season Two literally picked up exactly where we left off, with Bruce looking down the staircase! Of course, at the end of the stairs, there is a door with an electronic keypad with a million possible combinations. You have Barbara Kean chilling at Arkham Asylum with Jerome, our Joker-like fiend. Edward Nygma is scaring himself. Penguin is the king of Gotham and poor James Gordon loses his job in the first 10 minutes after capturing Zar-don, a not so scary bad guy. It's so bad that Harvey Bullock retired and is running a bar!

While Gordon & Harvey may not be working for the GCPD, crime doesn't stand still. Enter Theo Galavan, an original descendant of the Dumas (and eventually will be Azrael), posing as a charismatic billionaire industrialist and master-mind behind a multi criminal break out that pretty much makes his own Suicide Squad that he dubs "Maniax". Theo's right hand, and sister, Tabitha (aka: Tigress), is the enforcer making sure Theo's plans go off without a hitch. Theo and his "Maniax", which also includes Barbara Keen & Jerome, go out and kidnap the mayor and Cobblepot's mother. All the while, Theo decides to run for Mayor of Gotham and rule the city, but that's not his ultimate goal. Theo wants Bruce Wayne, the last descendant of the Wayne family that has dishonored his family, dead and tells his niece Silver St. Cloud to lure in Bruce with her feminine charms.

Selina Kyle is pulling off double duty, trying to show Bruce that Silver isn't who she says she is and, at the same time, trying to save her friend Bridgit Pike (who will become Firefly), whose brothers are forcing her to burn down buildings on the behalf of Cobblepot. Cobblepot is really working for Theo, who is holding his mother hostage. Kristen Kringle learns that Edward Nygma murdered Officer Dougherty, and while he was an ass, Nygma now is scary to Kringle, and for good reason. Of course, in an effort to keep her quiet, he accidentally strangles her, deepening the darkness within Nygma.

After an attack on Bruce Wayne, Cobblepot and Gordon capture Theo Galavan.  Knowing full just how deeply connected Theo is with the corrupt Gotham justice system, Cobblepot convinces Gordon that justice would only be served by killing him and Gordon does just that. Only thing is, the body of Theo makes its way to Indian Hill and into the hands of Professor Hugo Strange!

And that's only a little bit of the first half!

Gotham adds Michael Chiklis (The Shield, The Commish & Fantastic Four) to the cast as the new head of the GCPD, Nathaniel Barnes (which every time he goes out to fight crime you have to ask yourself if it's "Clobberin Time).  BD Wong (Law & Order: Special Victims Unit) joins the cast as Hugo Strange and his assistant Ethel Peobody is played by Tonya Pinkins (11.22.63). Natalie Alyn Lind (The Goldbergs) plays Silver St. Cloud. Michelle Veintimilla is Firefly/Bridgit Pike. Quite possibly the "coolest" addition to the cast is that of Paul Reubens as Cobblepot's father, Elijah Van Dahl. While Paul Reubens will forever be known as Pee-Wee Herman, he also stands as the only actor to play Oswald's father not only on TV, but on the big screen in Tim Burton's "Batman Returns" in 1992.

What makes Gotham so great is it's writing and how well they are able to create in-depth storylines with so many characters. I just got to talk to the cast of Gotham out at Comic Con, and when they brought the cast in, the size of it was overwhelming. There wasn't even enough space to allow photographers a chance to take a picture with the whole cast together. Seeing this in person put things in complete perspective as to how difficult a job it must be and yet they do it so flawlessly over 22 episodes a year!

With DC having such a deep catalogue of characters to dive into, it's virtually a never ending source of material that the writers of Gotham can put their own origin storylines to. Personally, I can't wait to see what's going to come out of Hugo Strange's Laboratory! With what happens at the end of season two, there is a lot out there for Gordon and the GCPD to clean up. It looks like the "Rise Of The Villains" has only just begun!

For me, Fox has a hit show on their hands! Gotham hands down beats out the CW versions of the DC universe with its dark overtones and brilliant storytelling. While Batman and their characters are so widely known, the backstories of Supergirl, Arrow, Flash & Legends aren't as well-known, unless you're a comic book junkie. Gotham doesn't need the high-octane special effects of a Supergirl or Flash, it just needs to constantly tease us into wondering "is this the one that becomes Joker? Or Harley Quinn?"  You know we are all waiting! It's the coolest aspect of this series because we finally get to witness the story of these character's youths and a more in-depth storyline as to how they became the characters we all know and love.

Season two was a blast and I'm hoping we get to see many more seasons and eventually see David Mazouz in the Bat Suit!

Gotham Season Two, Rise of the Villains is truly one of my top 5 favorite series on TV at the moment. Brilliant writing, acting and overall production just wins me over week to week proving, once again, DC has won over television with a vengeance! I give Gotham Season Two four and three quarters stars out of five! I'd watch it each week during the season, and binge it on Blu-ray! If you're not watching Gotham, you may find yourself in Arkham Asylum, since you may be slightly insane!

For more information about Gotham visit the FlickDirect Movie Database. This release has been provided to FlickDirect for review purposes. For more reviews by Sean Ferguson please click here.