The quality of the Blu-ray set is top notch and would be money well spent. 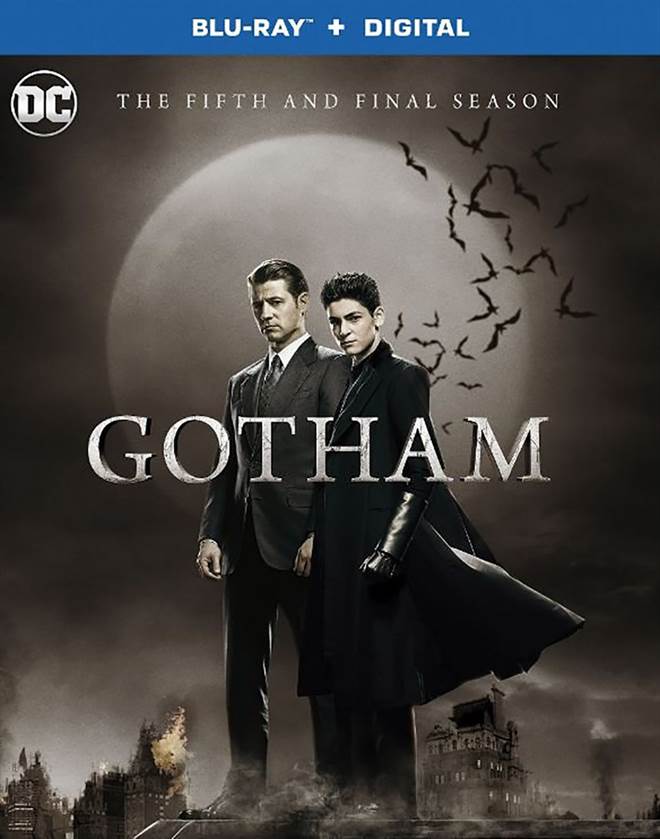 Gotham City - the home of Batman - was introduced in DC comics in December 1940.  It has remained a staple of the "Bat" world ever since and in 2014 it once again became the backdrop for a new television series on fox aptly titled, Gotham. On January 3, 2019, the fifth and final season debuted to try and wrap up half a decade of chaos and drama.  Fans of the show can own the last twelve episodes on Blu-ray, DVD and Digital beginning today and it is certainly one you will want t to add to your collection.

The premise of Gotham was always to tell many of the origin stories of the familiar characters we have come to know beginning with the future Gotham City Commissioner - James Gordon (Ben McKenzie; Southland).  Gordon is a detective who gets some help from Billionaire Bruce Wayne (David Mazouz: The Darkness) (pre-caped crusader) as well as others.  The series also introduced to the villains like Oswald Cobblepot/The Penguin (Robin Lord Taylor: John Wick: Chapter 3 - Parabellum) and Edward Nygma/Joker (Cory Michael Smith; Carol).  With a cast of characters as diverse as could be, there has always been complicated and engaging stories to tell and Season Five is no exception.

The season opener finds Gotham in chaos (but let's be real - when is it really not in chaos?).  The bridges have been bombed and, with there being no help from the mainland, the city is being run by the criminals all vying for control. Cobblepot is there with Nygma and Barbara is trying to keep the peace while Gordon has created a shelter for the victims called Haven. Throughout the season we watch as characters team up only to double cross each other leading up to the military advancement on the City.  Fast forward a decade for the final (100th in the series) episode. Gordon becomes Commissioner and Bruce Wayne is back donning a mask.

The final season in the series is almost half as long as the previous four, coming at twelve episodes as opposed to usual twenty-two.  This makes for faster-paced stories in an effort to resolve numerous plots and let's face it… the last episode is 10 years in the future so everything really needed to be done in eleven episodes which could have been a monumental task.  And it is somewhat as each week seems a little rushed.  However, I think in term of a final episode fans got what they needed though perhaps not necessarily what they wanted.

The 1080p high definition video with a 1.78:1 aspect ratio is an excellent representation of the show.  The blacks are deep and true, which for this show is a requirement more than an enhancement. The DTS -HD Master Audio 5.1 is an excellent compliment to the video as ambient noises are layered and rich. The extras are not necessarily plentiful but interesting none the less.  They include: Villains: Modes of Persuasion, Gotham 55: Best Moments at NY Comic Con, 2018, Gotham: a Modern Mythology, Gotham's Last Stand, and Unaired Scenes.

While the series thrilled comic book fans, offering them a glimpse of the beginnings of the characters we know so well, the rating dwindled over the five-year span so it seemed appropriate that this should be the last one.  As always the cast was superb and the stories were gripping.  The finale was a nice "full circle" moment and ended the series on a high note which is often not the case with television series.  The quality of the Blu-ray set is top notch and would be money well spent.

For more information about Gotham visit the FlickDirect Movie Database. This release has been provided to FlickDirect for review purposes. For more reviews by Allison Rose please click here.