I give season Empire Season One 4 records out of 5!  That’s right, Boo-Boo Kitty. I said it! And, I still think the best is yet to come! So get caught up and enjoy the tastiest Cookie out there!....and if you don’t, I only have one thing to say to ya…“Bye Felicia!" 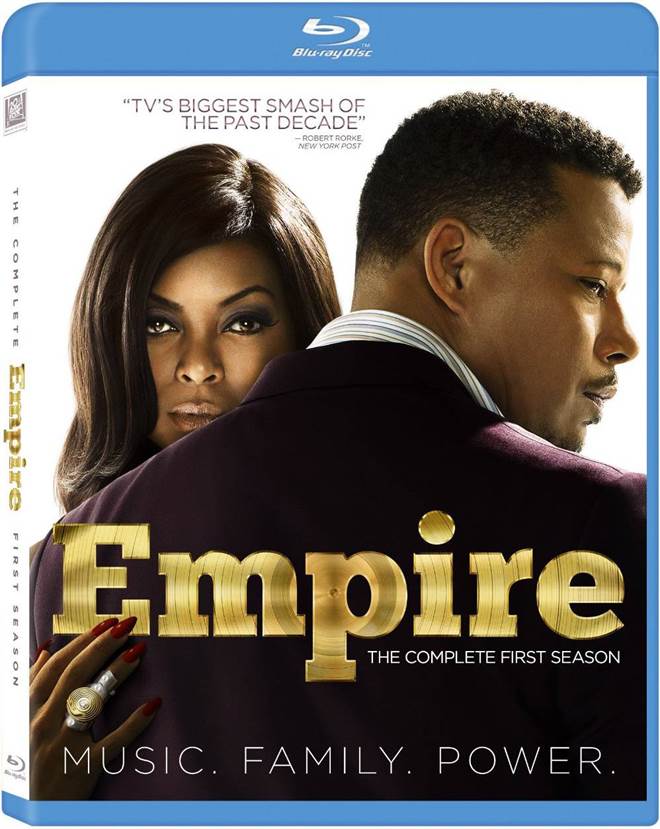 On January 7, 2015, Fox's smash hit, "Empire", burst onto the scene and, if your giving any credit for its success, just ask the woman in charge! She'll tell ya "Don't forget to thank your Cookie on this historic occasion." And a year later that occasion happens to be the release of Season One on DVD and Blu-ray out this week.

"Empire", if you haven't seen it yet, is the story about a hip hop company owned by Lucious Lyon, played by Terrence Howard. Howard, who may be remembered most for being in the first Iron movie, was also the other half of the Dynamic Duo from the Oscar Award Winning film "Hustle & Flow". In it, he starred opposite Taraji P. Hensen who, now, steals the show away as Cookie Lyon in "Empire." While Lucious may be the man in charge of the company, it's Cookie who shows up after being released from prison, wanting half of the company she started with Lucious!

Added to the drama is the three sons she now wants to renew her relationship with since doing her time. Three boys, with three distinct personalities: Andre Lyon, the eldest and CFO of Empire Entertainment is played by Trai Byers. Hakeem Lyon, the youngest son and a hip hop star on the rise (Let's all sing Drop drop, drip drippity drop) who's a bit fame obsessed and seems to think he's bigger than his other brothers, is played by Byshere Y. Gray. And then there's the middle son, the so-called black sheep of the family, Jamal Lyon, played by Jussie Smollett. Jamal is a singer/writer musician who gets very little respect or credit from his father….all because he's gay.

Basically Season One is all about Lucious finding out he's sick and needs to decide who will be the heir to the Empire throne and all the drama that comes from that! Will it be cutthroat? Yes! Will people die? Yes! Will there be cheatin & disrespectin going on? Hell Yea! Seriously why would we watch otherwise?

Yes! While a lot of the drama in this series can be cliché, and often times stereotypical, what makes Empire the hit it is, is Cookie Lyon. Cookie is the kind of person we all secretly wish we could be. She says it like it is and doesn't care who it offends. From advice like "The Luscious Lyon I knew would tell those idiots the streets ain't made for everybody — that's why they made sidewalks" to hysterical quotes like "Get rid of fake-ass Halle Berry. As long as she's around, I'm closed for business." Cookie has no censors and says whatever comes to her mind. Some have even gone as far as to compare her to a mix of Archie Bunker and Mamma Rose from Gypsy. Honestly, Taraji P. Hensen's whole embodiment of Cookie Lyon is the best thing in Empire, and really, to me, is the only reason to keep watching!

Empire also had a little bit of a side objective - their music. I think Fox thought they could pull off another "Glee" where they could create hit songs and make cash off them on a weekly basis, but this doesn't seem to be taking off quite as well as I think they had hoped. With the exceptions of Jussie Smollett's songs "Good Enough",  "You Are So Beautiful" and "Conqueror" featuring Estelle, the rest is pretty average, which is a shame considering Timbaland is overseeing the music of Empire.

Lee Daniels, the man behind "The Butler", is at the helm of Empire, along with co-creator Danny Strong, who has a nice pair of Emmy's for his work on "Game Change". Both should be proud of the series they have created. It has quite the following, and while some admit how it can be predictable or stereotypical, they also admit they just cant stop watching! It's like watching a car crash in slow motion. In fact, its gotten such a following that it is starting to bring back "Watch Parties"! Seriously!! I haven't heard people getting together to watch a series since "Melrose Place", but this series (and I give a lot of this to Cookie) creates a lot of fantastic one-liners and little bits that people are jumping onto social media commenting on. In fact, the two-hour season one finale of Empire drew 2.4 million tweets, with 51,000 tweets sent in the final minute alone. That's the highest numbers since 2011, when tracking of tweeted shows began. Crazy, huh?

The 20th Century Fox home entertainment presentation of Empire Season One is presented in AVC encoded 1080p transfer in 1.78:1 aspect ratio. While the transfer is sharp and crisp, the colors are a bit muted at times, almost as if on purpose. The DTS-HD Master Audio 5.1 encoded track really is brought to life during the musical performances sprinkled throughout the show and also contains a very crisp dialog throughout the Blu-ray's run-time.

Aside from a commentary by the cast and series creator Brian Grazer on Disc One, and an un-aired musical performance on Disc Two, Disc Three contains most of the special features included in the set, such as a few music videos, Empire: It's in the Music, and The Empire of Style.

At the end of the day, I will totally admit I watch Empire! It's quite entertaining and every once in a while they have a good song in it. I'm hoping that the rumored guest appearances will sing as well as cameo in the series. From what I'm seeing, it looks as if Pitbull, Mariah Carey, Chris Rock, Lenny Kravitz, Alicia Keys, Kelly Rowland and Ludacris may appear this year. So maybe it's best that if you haven't seen Season One, you get out there and get this Blu-ray set and get caught up!

I give season Empire Season One 4 records out of 5!  That's right, Boo-Boo Kitty. I said it! And, I still think the best is yet to come! So get caught up and enjoy the tastiest Cookie out there!....and if you don't, I only have one thing to say to ya…"Bye Felicia!"

For more information about Empire visit the FlickDirect Movie Database. This release has been provided to FlickDirect for review purposes. For more reviews by Sean Ferguson please click here.

Allison Rose
The cast is outstanding and Terrence Howard is a force to be reckoned with.
Full Review | Grade: B

Allison Rose
Empire has a few things going for it...First and foremost is the cast.  Howard has moments of pure evil and he can shut a person down with just a glaring stare.  His non-verbals are just as potent as the words coming out of his mouth.
Full Review | Grade: B