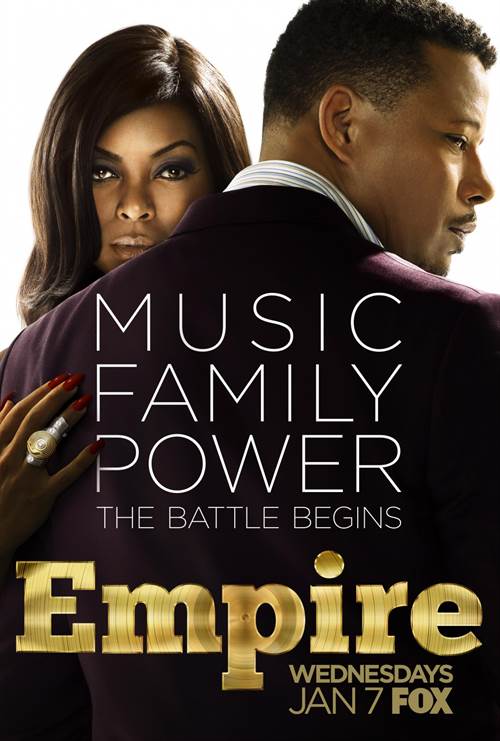 Starring Terrence Howard and Taraji P. Henson, and set within a world of glamour, danger, sex and power, EMPIRE is a new drama about a family dynasty that follows the head of a music empire whose three sons and ex-wife all battle for his throne. Featuring music by prolific producer Timbaland.

Stream Empire in Digital HD/4K from the AppleTV store.


Empire Renewed for Sixth Season Without Jussie Smollett  5/1/2019 2:12 PM EST
Fox's "Empire" has been renewed for a sixth season but we won't be seeing Jussie Smollett anytime soon. However, don't count him out completely."By mutual agreement, the studio has negotiated an extension to Jussie Smollett's option for Season 6, but at this time there are no plans for the character of Jamal to return to Empire", said Fox Entertainment and 20th Century Fox TV in a statement on Tue...  More>> 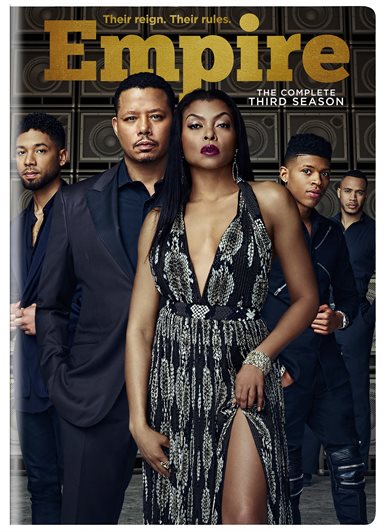 If you thought Seasons One and Two of the hit television show Empire where chock full, then get ready for Season Three.  Available now on DVD, the eighteen episode season really packs a punch.  From drama, murder, backstabbing and a new baby in the mix, the weekly nighttime soap opera seems to be hitting all the marks necessary to create suspense and interest. While still garnering the lion's share (pun definitely intended) of the television ratings, Empire had a dip this season so it will be interesting to see how it fares when season Four premiers this week.

Of course, Season Three begins with a death… Rhonda Lyon's (Kaitlin Doubleday; Catch Me IF You Can) to be exact.  She then spends the rest of the season "haunting" Andre.  Meanwhile, Andre and Shyne are scheming to obtain the license for Empire's Las Vegas operation without Lucious.  There is also the baby drama as Bella is taken away by Child Protective Services only to wind up with the DuBois Family.

On the other end, we have Cookie and Angelo (Taye Diggs; Private Practice) who become more heavily involved as he runs for Senate.  However, things between them fizzle when Cookie reveals she still loves Lucious.  Jamal and Lucious still have that tenuous relationship.  Jamal, meanwhile, tries to kick his painkiller addiction. And, of course, Lucious is up to his no good ways.  However, the season ends with Lucious getting shot and after being in a coma, waking up to having amnesia. We all know that will eventually make for even more family drama as Season Four begins!

Empire has a few things going for it that make it a popular show.  First and foremost is the cast.  Howard has moments of pure evil and he can shut a person down with just a glaring stare.  His non-verbals are just as potent as the words coming out of his mouth and I'm not sure another actor could pull it off as well as Howard does.  Henson's Cookie is a formidable foe to Howard's Lucious and her feistiness goes tit for tat with him.  She has a spark and fierce "momma bear" mentality to her that she tends to command most of the scenes she is in.  My other favorite is Smollett.  Not only is he a natural vocal talent but I feel he has a certain "presence" that makes you want to watch him.  The rest of the cast is also strong and guest appearances this season from Mariah Carey (Precious), Snoop Dogg (Training Day) and Gina Gershon (Show Girls) are an added bonus.

The DVD has all eighteen episodes on 5 discs and includes Uncut Music Performances and Studio Sessions extras.  Since this show is so focused on music, these extras are a treat for any fan of the show.  The talent displayed in the extras is evident and shows that the cast was chosen for a reason.  With the DVD presented in English Dolby Digital 5.1, the music can be enjoyed in a full range with a robust soundtrack to enhance the drama.

Empire still is a hit for FOX but it has lost some viewership since its beginning so it will be interesting to see how many more seasons it has.  For now, though, it is full of the drama we have come to expect with a sharp edge to it that only the Hip Hop industry can offer.  Fans will want to pick up this third season DVD set and get ready for Season Four.