Home / Reviews / The Space Between Us

Overall, The Space Between Us is a pleasant, family oriented film.  The ending is almost predictable and there are really no “surprises” in the movie, itself....This is a good and relaxing weekend afternoon movie to settle down with the family to watch. 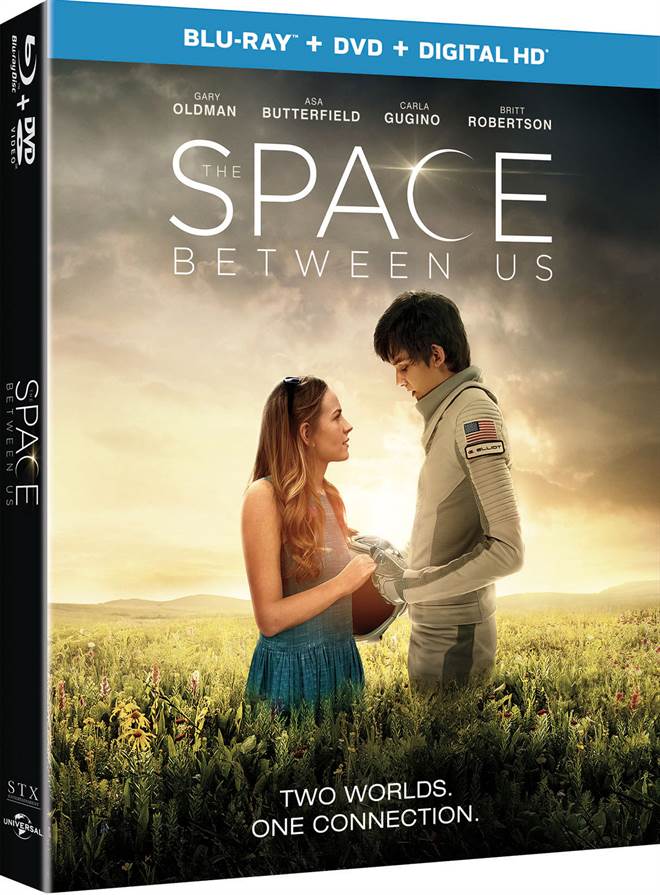 Purchase   DVD/Blu-ray/4K UHD
There have always been space movies spattered throughout the years and they all seem to instill a sense of survival mode while watching.  You root for the astronaut to hold his breath when the face mask cracks; you hope the rocket will have enough fuel to make it safely back home, and you pray that the Apollo doesn't burn up re-entering the atmosphere.  All of these themes and storylines are wonderful in the same sense that we want everyone to come back to Earth safely.  But, what about that one movie that makes you think, "Goodness, I hope he can leave Earth already?"  That's a new concept- something we really haven't experienced before.  Yet, in a typical space love story, The Space Between Us, does exactly that- it has us hoping that we can just leave Earth behind.

The Space Between Us is a lovely coming of age story.  Writers Allan Loeb (Collateral Damage), Stewart Schill (Frank v. God), Richard Barton Lewis (Robin Hood:  Prince of Thieves), and Screenwriter Tinker Lindsay (Hector and The Search for Happiness) have created a long distance romance that happens to be set millions of miles apart.  It's about a boy searching for his roots- not only his Earthly roots but his biological roots.  Universal and STX Films has produced such a sweet and simple story, in a world that is not sweet or simple, that by the time it ends, you slowly release the breath you didn't even realize you were holding.

Asa Butterfield (Miss Peregrine's Home for Peculiar Children; Ender's Game) plays Gardner Elliot, a boy whose mother was the lead astronaut on the Genysis mission to Mars.  Turns out, mom was pregnant upon lift off, and Gardener was not only born on Mars but kept a secret to the people of Earth, other than those working on the project.  It was determined since in-vitro, Gardner was subjected to zero-gravity, his heart and bones would not be able to survive on Earth, therefore, Gardner, literally the first Martian, would live his life out on Mars.   Surrounded and raised by scientists, Gardner makes a connection with a teenage foster child, nicknamed Tulsa, in the Midwestern United States, over an internet connection.  Despite all of the medical concerns, the project finally relents to allow Gardner to come to Earth, where he runs off and finds his one friend so she can help him find his father.

Butterfield's performance is pleasant enough.  He is innocent in the ways of Earth and social interaction, but as he says, he's "raised by scientists" and you see the personality of this teenager, getting around all the rules set out for him by his guardians.  Butterfield's striking eyes keep you focused on his face, but rarely do you see clear-cut emotions.  It's possible that he was directed to have almost a robot face, not having dealt with "Earthlings" before, but his antics in the Mars home show that he is capable of being a regular teenager.

Britt Robinson (Tomorrowland) plays Tulsa, the teenage foster girl, who befriends Gardner over the internet.  Robinson has some grit to her character in the beginning but as the movie progresses, her acting becomes more complacent.  She clearly is the bad influence on the innocent Martian, but not out of spite, just out of her upbringing.  Robinson's character is up for a road trip and she seems to really care about Gardner.  While Robinson's character is an older teen, and it seems as if Gardner is a few years younger, Robinson seemed to a be a lot older than her character should have been.

Nathaniel Shepherd is the head of the Genysis program.  Played by Gary Oldman, a seasoned and well-known actor, even before playing Sirius Black in the Harry Potter franchise, Shepherd was an active proponent of keeping the baby a secret and raising him on Mars; yet, soon after, Gardner's mother dies in childbirth and he disappears from the program, only to return when Gardner makes his trip to Earth.  Oldman has played a variety of characters in his illustrious career, and because of that, I kept waiting for the "wow" factor to show itself in his acting.  Unfortunately, while Oldman's performance is pleasant enough and not overdramatized, at the end of the movie, it's clear that the deep emotion that should have been present was missing.

Director Peter Chelsom (Serendipity) has directed several romantic comedies that have high earning actors starring in them- such as Richard Gere (Shall We Dance?); John Cusak (Grosse Pointe Blank) and Kate Beckinsale (Serendipity) but despite the name-brand actors, the deep feeling and emotions just seem to fall flat.   It seems as if Chelsom could do more with his actors, especially with a seasoned actor like Oldman, who should have has some more power to his performance.   Chelsom may just pick the sweet storylines to direct because they are filled with loving interest but the talent is underutilized.

The actual film is presented in 1080p HD, with an aspect ratio in widescreen of 2.40:1.  The contrast in colors between the reds of Mars and the blues and greens of Earth are really spectacular.  The color of the ocean appears real- and life like- it's the murky dark blue-green, that is true to how we really see the ocean, instead of color enhanced.  As mentioned before, the clarity and intensity of Butterfield's eyes pop in every scene.  Overall, the picture quality, color quality, and overall presentation provide a pleasant viewing experience that makes you feel as if you are watching a live scene.

The audio presentation is a solid plus for the film.  Audio quality DTS-HD Master Audio 7.1.  It's not the same audio as you'd hear in an action film, but it's pleasant enough.  You can hear sound effects well- such as the waves crashing, the rover rolling, and of course, the rocket blasts.  The background music is wonderfully supporting of the script and never overpowers any of the dialogue.

I would have loved to see behind the scenes of how the spaceship scenes were filmed and the Making of Mars, but the bonus features are few on the Blu-ray, consisting of the following:

Overall, The Space Between Us is a pleasant, family oriented film.  The ending is almost predictable and there are really no "surprises" in the movie, itself.  I do wish that the caliber of acting was deeper, as the actors featured in the movie clearly have the ability to do so much more with their characters, but I don't believe the fault is entirely their fault, as the script was simply "pleasant".  This is a good and relaxing weekend afternoon movie to settle down with the family to watch.

For more information about The Space Between Us visit the FlickDirect Movie Database. This release has been provided to FlickDirect for review purposes. For more reviews by Jennifer Broderick please click here.

Read More The Space Between Us Reviews

Allison Rose
If you are a hormonal, romantic, teenage girl with a crush on Butterfield, you will want to buy a ticket to this film.
Full Review | Grade: C