Fear the Walking Dead Season 3 is a great progression for this spinoff show.  Most shows are seldom perfect, but here is a great example of the writers learning from their mistakes and improving on, a somewhat tired genre. 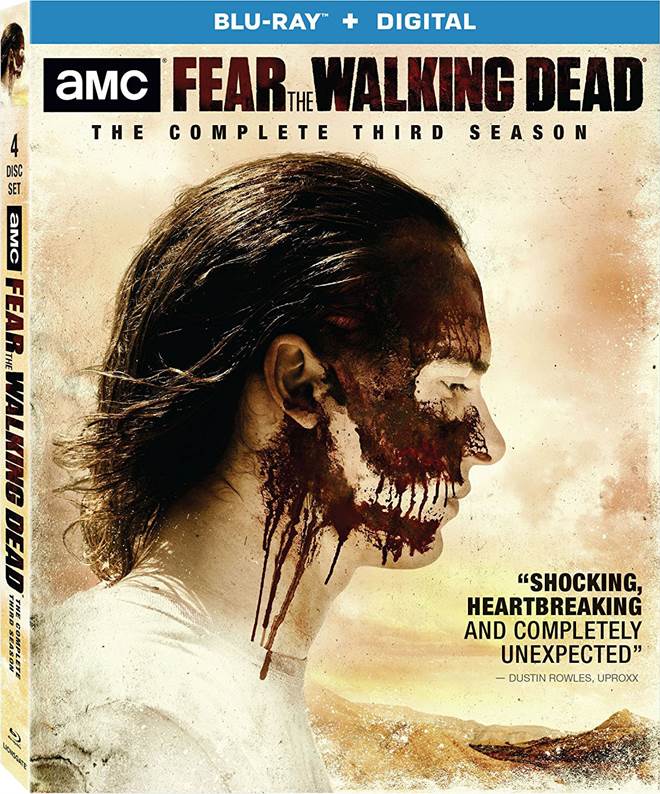 Purchase   DVD/Blu-ray/4K UHD
Fear the Walking Dead took some time to walk on steady legs, but season 3 bolted out of the gate with the Military compound being overrun and quickly continues with the unexpected death of Travis Manawa (Cliff Curtis; Live Free or Die Hard) while eventually, Madison (Kim Dickens; Gone Girl) and her kids make it to the (relative) safety of the ‘Broke Jaw Ranch'.  Being fans of zombie horror, we all know that safety is just an illusion, and any place where Troy Otto (Daniel Sharman; Teen Wolf) holds power, is no safe place at all.

I won't sit here and bore everyone with an episode-by-episode synopsis, there's plenty of places where you can get that info, instead I'll just give my brief review of the season and then Blu-ray.

Firstly, the Writers did an excellent job pacing this season and moving the story forward, although it does lag in parts, mid-season, they did a respectable job tying up many loose ends as well as revealing many, seemingly lost characters, i.e. Daniel and Ofelia, not to mention pulling the many groups together: The Ranch is out of water and Daniel/Strand have the connection with the Dam. They even tackled some heavy subjects such as racism, as well as children paying for the sins of their fathers. In this case, the Otto's have some serious debts to repay and karma is certainly a bitch, in the apocalypse.

While I vacillated between like and hate in the previous 2 seasons, Season 3 seemed to be the most consistently action-packed and was definitely better written than its bloated and long-winded counterpart. Yet they still tried to draw a line to The Walking Dead and seem to be creating a prequel, of sorts, to its sister-show. I am still unsure how they plan to connect the two, and although teasers connect Morgan (Lennie James) to the show in Season 4, I will reserve judgment until I see it play out. All in all, Season three is the best for ‘Fear', so far, and I hope they continue this trend.

On to the Blu-ray specifics, Fear the Walking Dead is encoded MPEG-4 AVC with an Aspect ratio of 1.78:1 1080p and as such, one should expect solid visuals through the entire season. The show is sharp and clear and little to no source flaws though some of the darker scenes seemed a little soft but overall there is nothing to complain about.

The Audio is Dolby TrueHD 5.1 and the soundscapes carry many of the scenes atmospheric content. I loved the sounds of combat, helicopters and many of the ambient noises brought the episodes to (un) life, especially the Zombie hordes and even the softer, dialog-driven scenes, are clear and bright. While not enough to send me running out to pick up the soundtrack, the music was lively and polished, as you would expect from a big-budget show.

The extras offered here aren't plentiful, but if you enjoy the commentary, as most fans do, you will appreciate "Eye of the Beholder", "Children of Wrath", and  "Sleigh Ride". Each has co-producers Ericson and Bernstein as well as Kim Dickens, Coleman Domingo and Dayton Callie lending their anecdotes as well as performance stories and plenty of joking. You can tell there is great affection and comradery between the cast and producers and they provide a welcoming if standard commentary.

We also get Deleted and Extended scenes for eight of the episodes, and while they add a few nuggets to some of the characters, they aren't enough to positively impact the overall story, You can understand why they ended up being cut from each episode.

All in all, Fear the Walking Dead Season 3 is a great progression for this spinoff show.  Most shows are seldom perfect, but here is a great example of the writers learning from their mistakes and improving on, a somewhat tired genre. For fans of the show and the zombie genre, in general, you are already set on picking this up. For those that are getting into the show, don't miss out on this season as it's the strongest out of the three, and at a retail price of $24.99, its priced right, too.

The action and tension built from the human drama is always more interesting to see; it is how these people behave during an unthinkable apocalypse which drives the story towards its gruesome conclusion. Fear the Walking Dead didn't forget that, while still providing plenty of gut-munching goodness, too. I hope they connect the two shows together in a meaningful and creative way and return to the roots of horror and action.  Perhaps they can infuse some of their recent achievements into The Walking Dead, and reanimate that sleeping corpse.

For more information about Fear The Walking Dead visit the FlickDirect Movie Database. This release has been provided to FlickDirect for review purposes. For more reviews by Leonard Buccellato please click here.

Fear The Walking Dead images are © AMC. All Rights Reserved.

Leonard Buccellato
If you’re a lapsed fan of Fear The The Walking Dead, or perhaps decided not to continue with this series, you may want to give it another try.
Full Review | Grade: B