If you’re a lapsed fan of Fear The The Walking Dead, or perhaps decided not to continue with this series, you may want to give it another try. 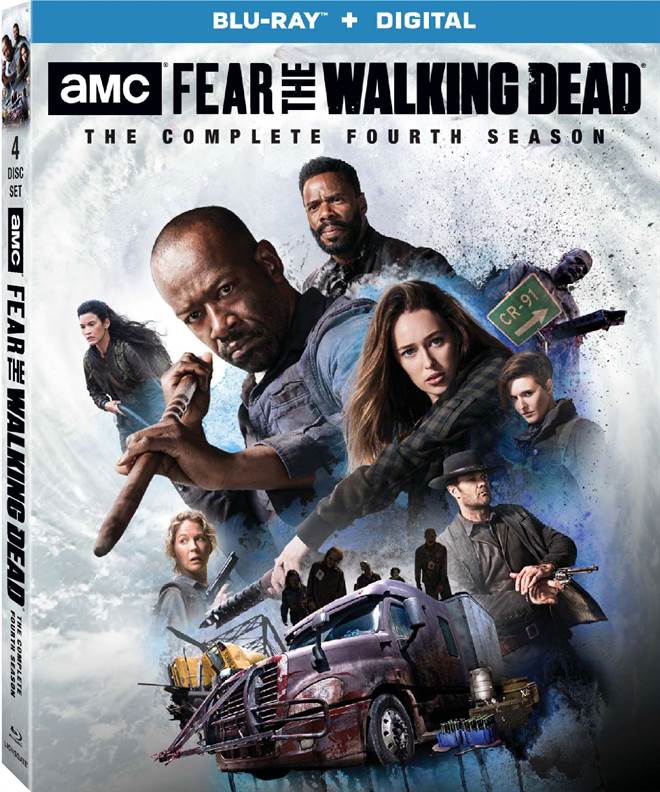 Purchase   DVD/Blu-ray/4K UHD
At the risk of pulling a Groundhogs Day review, Fear the Walking Dead Season Four bolts out of the gate and makes a fast run for the finish line. On March 5th, 2019 Morgan Jones (Lennie James) departs from his friends in The Walking Dead and meets up with the friends and family of Madison Clark (Kim Dickens). The gore is about to hit the fan:

In Season 4 of "Fear the Walking Dead," we will see the world of Madison Clark (Kim Dickens) and her family through new eyes — the eyes of Morgan Jones (Lennie James), joining the story from the world of "The Walking Dead." The characters' immediate past mixes with an uncertain present of struggle and discovery as they meet new friends, foes, and threats. They fight for each other, against each other, and against a legion of the dead to somehow build an existence against the crushing pressure of lives coming apart. There will be darkness and light; terror and grace; the heroic, mercenary, and craven – all crashing together towards a new reality for "Fear the Walking Dead."

As per my usual review, I will forego the long-winded and ever unnecessary blow-by-blow, episode review, in favor of a brief but general review of the season. In this case, Fear the Walking Dead has found its legs. This season continued to grow on me in positive and interesting ways. I especially found this with the growth, and even devolution, of certain characters, as well as the deaths of many of the show's anchor characters whom we have watched from episode one, season one. We are treated, through some deft writing and really decent acting, to a varied and action-filled plot. The story plays out in interesting ways, too, and although it may jump around a bit, I tended to enjoy it, as the details are slowly revealed, circuitously. It definitely held my interest, more so than a straightforward play by play of events.

(Yes, I'm being purposely vague, just in case you haven't seen it, or have given up).

If you're a lapsed fan, or perhaps decided not to continue with this series, you may want to give it another try. I was pleasantly surprised when I watched Season 4, and I think you will be, as well. Especially if you feel, as I do, that while TWD has about overstayed its welcome, FearTWD is trying to keep it fresh.

Now on to the 4-disc set details. First, and foremost, you will not be disappointed with the look and sound, of this Blu-ray. Just like the previous season, we are treated to 1080p High Definition 16x9 (1.78:1) Presentation and English 5.1 Dolby True HD. From the bleak and ruinous landscapes to the forlorn and decrepit water park, the world of post-apocalyptic civilization is rendered in glorious detail. We are treated to the bloating corpses in the swimming pool, where we can almost smell the fetor of decay. The eerie, quiet loneliness of the empty road, as Morgan roams the earth looking for forgiveness/redemption. The isolation of the cabin and desperation of almost being overrun by a herd of Walkers rising from the fog-shrouded riverbanks to the sounds of gunfire, exchanged between the Vultures and Alicia (Alycia Debnam-Carey) and what remains of her group of desperate survivors. You will be fully immersed in their world of survival horror.

Finally, the extras on this set are almost non-existent except for a few, and I do mean few, audio commentaries. I have listed them out below just in case you blink, you might miss them. Disappointingly, it seems like they didn't even try.

All in all, Fear the Walking Dead Season 4 is a decent set to have, whether you are a completest or if you are like me, and still cling to, and enjoy having, physical media, especially if you have a few favorite episodes you like to watch, when you want to watch them. Like much that has come before this, and like Groundhogs Day (I wrote reviews for a few of the previous seasons, that's why I feel like I've been here before, in case you didn't get the reference), we will most likely be here next winter when I discuss the virtues and shortcomings of Season 5 on 4K! This show is harder to kill than a horde of Zombies. In the case of Fear the Walking Dead, that's a good thing. Although, I'm not so sure about its long-in-the-tooth counterpart.

For more information about Fear The Walking Dead visit the FlickDirect Movie Database. This release has been provided to FlickDirect for review purposes. For more reviews by Leonard Buccellato please click here.

Fear The Walking Dead images are © AMC. All Rights Reserved.

Leonard Buccellato
Fear the Walking Dead Season 3 is a great progression for this spinoff show.  Most shows are seldom perfect, but here is a great example of the writers learning from their mistakes and improving on, a somewhat tired genre.
Full Review | Grade: B