With South Park morphing with the times it seems like the show will continue on for a long time to come. It is a nice way to get your information about the world in a fun way versus the 24 hours news cycle. 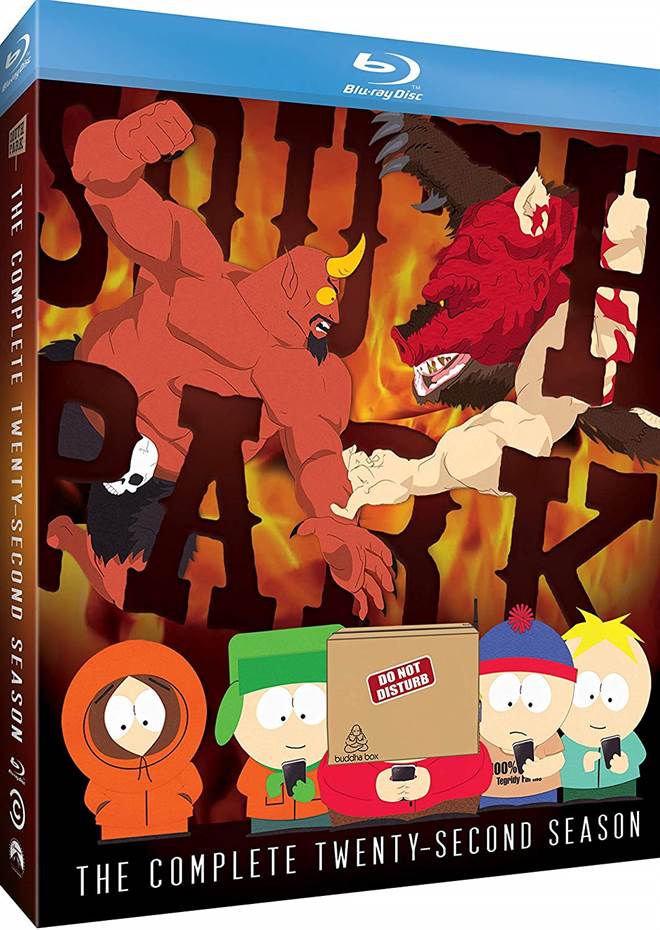 Purchase   DVD/Blu-ray/4K UHD
South Park, which as of May of last year was Hulu's most-watched show, debuted in 1997 and has become a cultural phenomenon. The show has consistently pushed the envelope with its dark and sometimes outrageous humor and remains one of Comedy Central's highest-rated shows after all these years. It also produced a successful feature film in 1999.  The ten-episode 22nd season, which premiered back in September of 2018, continues this successful recipe and is now available on Blu-ray for your home entertainment collection.

This season sees the usual cast of characters - Eric Cartman, Kenny, Kyle, and Stan - tackle world events such as school shootings, climate change, and political correctness (among others) with their own unique brand of humor while, in reality, bringing awareness to the viewer of some tough to talk about topics. However, even though this series has its die-hard fans, the premiere episode of the season, "Dead Kids", was the lowest-rated season opener in its history. However, It is doubtful that this means the show's future is in peril, as it was renewed for a 23rd season, set to premiere this year. In fact "Dead Kids" was, in fact, a great social commentary on how school shootings have sadly become a norm and that society is becoming desensitized to these tragedies. They carried this theme throughout the season just to remind us it's still that way.

As is the case with the more recent seasons, South Park has become more of a serialized show versus one-off episodes as it was in its earlier years. This year was filled with social commentary on our state of society sprinkled throughout each episode, but the two-part final episode about an Amazon fulfillment center coming to South Park really went out there to point out some of the issues we face in society such as capitalism vs socialism and consumerism.

The season also began with an unusual hashtag publicity campaign, #cancelsouthpark, which is a bit of a tongue-in-cheek way to reference their continual controversial content. It also pokes fun at those offended by the show as well as to cynically make-fun of the way social media has become the place to complain if you are not happy with a show in an effort try to have it canceled.

The 1080p high definition video has an aspect ratio of 1.78:1, making this transfer look exceptionally well on your television.  The details are sharp and the colors are bright – from the orange of Kenny's hood to the red of Cartman's jacket and everything in between.  The Dolby TrueHD 5.1 audio is an excellent compliment and the video and audio seamlessly blend like the melding of flavors in your favorite meal.

This two-disc set also includes deleted scenes and mini-commentaries on each episode by series creators Trey Parker and Matt Stone.  These "gems" give the viewer a look inside the minds of these two talented (yet disturbed) individuals.

With South Park morphing with the times it seems like the show will continue on for a long time to come. Just like the Simpsons, it has become multigenerational and it is a nice way to get your information about the world in a fun way versus the 24 hours news cycle.

For more information about South Park visit the FlickDirect Movie Database. This release has been provided to FlickDirect for review purposes. For more reviews by Nathan M Rose please click here.

John Delia
The boys are back at it again in Blu-ray with the release of South Park: The Complete Fifteenth Season.
Full Review | Grade: A