The cast has terrific chemistry which is part of what has made the show so popular. 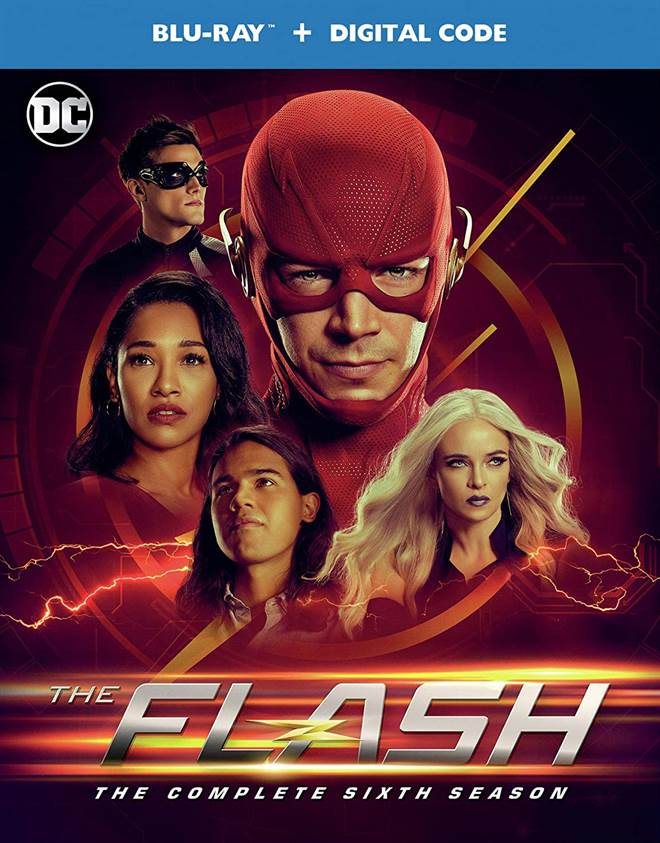 Bartholomew Henry "Barry" Allen, a.k.a The Flash (Grant Gustin; Glee) first appeared in DC Comics' showcase #4 back in 1956.  Possessing super speed, he could defeat enemies before they even knew what hit them.  In 2014, the CW added The Flash television series was added to the "Arrowverse" lineup. Premiering at the beginning of October, the show was the second most watched premiere (Vampire Diaries is #1) on the CW and garnered critical and audience acclaim. Five years later, Season Six premiered.  Originally slated to be 22 episodes long, the season was cut down to 19 episodes due to the COVID-19 outbreak.  While Season Seven is slated to premiere in January 2021, The Flash: The Complete Sixth Season is available now for purchase on Blu-ray.

As you may remember, Season Five ended with Barry and Iris' (Candice Patton; The Guest) daughter, Nora (Jessica Parker - Kennedy; Black Sails), getting erased.  When Season Six opens, the timeline has skipped ahead four months and, while Barry and Iris try to accept Nora's disappearance, the others still hold out hope of her survival.  Throughout the season, there were two new villains to defeat, with the better one being Bloodwork (Sendhil Ramamurthy; Beauty and the Beast).  We also saw the return of Eobard Thawne, a.k.a Reverse-Flash (Tom Cavanaugh; Scrubs).

The second villain of Season Six was Mirror Master/Eva McCulloch (Efrat Dor; Mayans M.C.), who had been trapped in a mirror for six years.  Her arrival created quite a mystery and allowed Patton to show off her acting abilities by playing Iris and Mirror Iris, the conniving twin.  Unfortunately, Mirror Master's story didn't get resolved because the season was cut short due to the COVID-19  virus outbreak.  Once the new season premieres sometime in 2021, it will be interesting to see how the writers finish this arc and move forward to the next story.

The cast has terrific chemistry which is part of what has made the show so popular.  Patton's portrayal of Iris' evil twin added an interesting twist to the show and hopefully, the story will come to a satisfying end in season seven.  Gustin is wonderfully cast and I have enjoyed watching him evolve throughout the years.  The Sixth Season gave his character room to grow which, in turn, gave the actor time to stretch himself professionally.

The 1080p High Definition video quality is one of the pluses of this release.  Black hues are inky and solid while the colors pop.  The DTS-HD Master Audio 5.1 is what one has come to expect from a DC show.  The lower tones pack a punch as they rumble from the subwoofer.  The surround sound attacks the viewer from all angles fully immersing them in the experience of each episode. The Blu-ray combo pack comes with the Digital HD code, as well as, five discs that not only include the 19 episodes of season six but the extras as well.  These include:

Every television show has at least one season that doesn't live up to the rest of the series.  For The Flash, Season Six is that season.  While it has some terrific arcs and leaves the audience curious as to what comes next (again, probably because it was cut short), there were also some slow parts and some which seemed disjointed.  Overall though, it is a solid effort for a show that has been satisfying thus far.

For more information about The Flash visit the FlickDirect Movie Database. For more reviews by Allison Rose please click here.

Sean Ferguson
There is so much to be said about Warner Bros. Television & CW and how they are dominating the DC TV universe and how they really seem to be in the zone!
Full Review | Grade: A

Allison Rose
The Flash is an example of what is right with television today as it entertains with great characters, strong writing and excellent storytelling.
Full Review | Grade: A