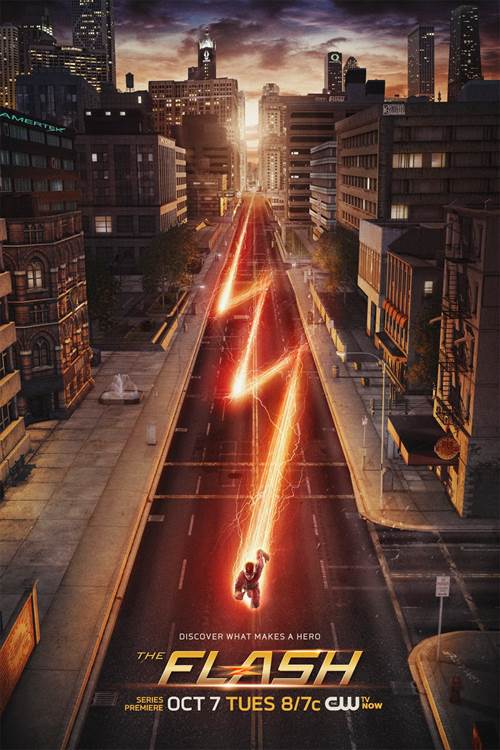 Barry Allen was just 11 years old when his mother was killed in a bizarre and terrifying incident and his father was falsely convicted of the murder. With his life changed forever by the tragedy, Barry was taken in and raised by Detective Joe West, the father of Barry’s best friend, Iris. Now, Barry has become a brilliant, driven and endearingly geeky CSI investigator, whose determination to uncover the truth about his mother’s strange death leads him to follow up on every unexplained urban legend and scientific advancement that comes along. Barry’s latest obsession is a cutting edge particle accelerator, created by visionary physicist Harrison Wells and his S.T.A.R. Labs team, who claim that this invention will bring about unimaginable advancements in power and medicine. However, something goes horribly wrong during the public unveiling, and when the devastating explosion causes a freak storm, many lives are lost and Barry is struck by lightning. After nine months in a coma, Barry awakens to find his life has changed once again – the accident has given him the power of super speed, granting him the ability to move through Central City like an unseen guardian angel. Though initially excited by his newfound powers, Barry is shocked to discover he is not the only “meta-human” who was created in the wake of the accelerator explosion – and not everyone is using their new powers for good. In the months since the accident, the city has seen a sharp increase in missing people, unexplained deaths and other strange phenomena. Barry now has a renewed purpose – using his gift of speed to protect the innocent, while never giving up on his quest to solve his mother’s murder and clear his father’s name. For now, only a few close friends and associates know that Barry is literally the fastest man alive, but it won’t be long before the world learns what Barry Allen has become…The Flash.

Stream The Flash in Digital HD/4K from the AppleTV store.


Season 9 of The Flash to Be Its Last  8/1/2022 3:12 PM EST
The CW has announced that the upcoming 9th season of "The Flash" will be its last. The season, set to debut next year, will be a short one, with just 13 episodes.The season will star Grant Gustin, Candice Patton, Danielle Panabaker, and Jesse L. Martin, and will begin midseason 2023.The Flash executive producer/showrunner Eric Wallace said, "Nine seasons! Nine years of saving Central City while ta...  More>>

Hartley Sawyer Fired from The Flash After Racist and Misogynisti...  6/8/2020 2:40 PM EST
Hartley Sawyer, who played Ralph Dibny (Elongated Man) on CW's "The Flash", has been fired from the series after old tweets of his have surfaced containing racist, misogynistic, and homophobic references."Hartley Sawyer will not be returning for season seven of The Flash. In regards to Mr. Sawyer's posts on social media, we do not tolerate derogatory remarks that target any race, ethnicity, nation...  More>> 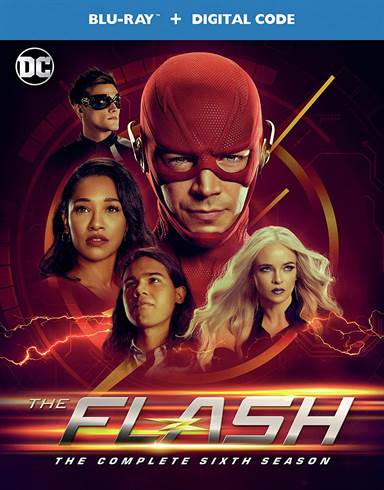 Bartholomew Henry "Barry" Allen, a.k.a The Flash (Grant Gustin; Glee) first appeared in DC Comics' the showcase #4 back in 1956.  Possessing super speed, he could defeat enemies before they even knew what hit them.  In 2014, the CW added The Flash television series was added to the "Arrowverse" lineup. Premiering at the beginning of October, the show was the second most watch premiere (Vampire Diaries is #1) on the CW and garnered critical and audience acclaim. Five years later, Season Six premiered.  Originally slated to be 22 episodes long, the season was cut down to 19 episodes due to the COVID-19 outbreak.  While Season Seven is slated to premiere in January 2021, The Flash: The Complete Sixth Season is available now for purchase on Blu-ray.

As you may remember, Season Five ended with Barry and Iris' (Candice Patton; The Guest) daughter, Nora (Jessica Parker - Kennedy; Black Sails), getting erased.  When Season Six opens, the timeline has skipped ahead four months and, while Barry and Iris try to accept Nora's disappearance, the others still hold out hope of her survival.  Throughout the season, there were two new villains to defeat, with the better one being Bloodwork (Sendhil Ramamurthy; Beauty and the Beast).  We also saw the return of Eobard Thawne, a.k.a Reverse-Flash (Tom Cavanaugh; Scrubs).

The second villain of Season Six was Mirror Master/Eva McCulloch (Efrat Dor; Mayans M.C.), who had been trapped in a mirror for six years.  Her arrival created quite the mystery and allowed Patton to show off her acting abilities by playing Iris and Mirror Iris, the conniving twin.  Unfortunately, Mirror Master's story didn't get resolved because the season was cut short due to the COVID-19  virus outbreak.  Once the new season premieres sometime in 2021, it will be interesting to see how the writers finish this arc and move forward to the next story.

The cast has terrific chemistry which is part of what has made the show so popular.  Patton's portrayal of Iris' evil twin added an interesting twist to the show and hopefully, the story will come to a satisfying end in season seven.  Gustin is wonderfully cast and I have enjoyed watching him evolve throughout the years.  The Sixth Season gave his character room to grow which, in turn, gave the actor time to stretch himself professionally.

The 1080p High Definition video quality is one of the pluses of this release.  Black hues are inky and solid while the colors pop.  The DTS-HD Master audio 5.1 is what one has come to expect from a DC show.  The lower tones pack a punch as they rumble from the subwoofer.  The surround sound attacks the viewer from all angles fully immersing them in the experience of each episode. The Blu-ray combo pack comes with the Digital HD code, as well as, five discs that not only include the 19 episodes of season six but the extras as well.  These include:

Every television show has at least one season that doesn't live up to the rest of the series.  For The Flash, Season Six is that season.  While it has some terrific arcs and leaves the audience curious as to what comes next (again, probably because it was cut short), there were also some slow parts and some which seemed disjointed.  Overall though, it is a solid effort for a show that has been satisfying thus far.