Over the years, Mommie Dearest has created a cult like following the likes of which would make Joan Crawford proud. 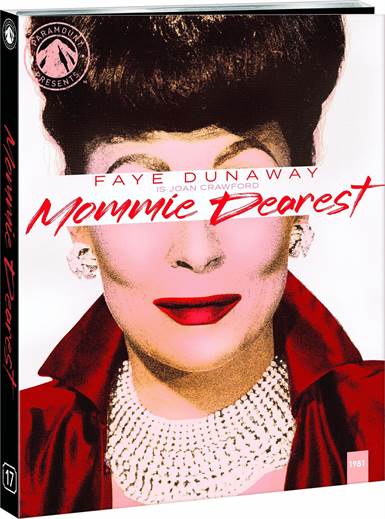 Joan Crawford was an icon of the silver screen.  Beginning as a silent films actress, she transitioned to "talkies" with ease.  However, the one thing she desired most, a child, is something she could never have.  After several miscarriages, she decides to adopt, which turned out to be more difficult than she thought.

Eventually, though, she got her wish and adopted Christina in 1939 and Christopher four years later.  Joan also adopted twin girls, Cindy and Cathy.  After Joan died, Christina wrote Mommie Dearest - a scathing, biographical book describing the abuse Joan inflicted on her two children, Christina and Christopher. In 1981 it was adapted into a feature film starring Faye Dunaway (Network). In June, as part of the 40th-anniversary celebration, the Paramount Presents series released the movie on Blu-ray.

Crawford's (Dunaway) career was taking a downward turn after she was described as box office poison.  This caused her to drink heavily which sometimes caused her to be abusive to her children.  Her oldest, Christina (Mara Hobel; The Hand/Diana Scarwid; What Lies Beneath), seemed to bear the brunt of Crawford's scorn.  She had her hair cut off by Crawford when she found Christina playing with Crawford's makeup, forced Christina to eat a raw steak, and beat Christina with a wire hanger when Crawford found it in Christina's closet.

Dunaway, Hobel, and Scarwid beautifully reenact the tumultuous relationship Crawford had with her adopted daughter throughout both of their lives.  Dunaway brings Crawford to life and lays all of Crawford's demons out on display in an array of increasingly crazy scenes.  Steve Forrest (Spies Like Us) portrays Crawford's boyfriend, Hollywood Lawyer, Gregg Savitt with a mixture of tenderness and cold, harsh steeliness that merely seems like window dressing whenever he is on screen with Dunaway.

The 1080p video quality, transferred from a 4K master, is the star here.  The picture seems slightly brighter, and the details are sharp.  Visually, the film has never looked better which, in this case, is important as Crawford placed so much emphasis on appearances throughout her life. The color reproduction is also important so that lipstick, clothing, and décor can pop off the screen.  Since the Blu-ray version is lighter (as mentioned above), the colors really stand out without looking cartoonish.

The DTS-HD Master Audio 5.1 is very good but not outstanding and I think part of that has to do with the fact that the film is heavy on the dialogue with a decent soundtrack hiding in the background.  The surround sound speakers don't get as much use here as they might with other films but what comes through is some soft ambient noise.  The vocals are crisp and easy to understand, which in this case is the most important part of the audio component of the movie.

The extras are the same as what was previously released on the DVD back in 2017, except for the filmmaker focus and the redeemable digital code.  The other extras include Audio Commentary by American drag queen Hedda Lettuce and by Filmmaker John Waters, Filmmaker Focus: Biographer Justin Bozung on Director Frank Perry, The Revival of Joan, Life with Joan, Joan Lives On, photo gallery, and the original theatrical trailer.

Over the years, Mommie Dearest has created a cult-like following the likes of which would make Joan Crawford proud.  The movie is disturbing and depressing but also teaches the audience a valuable lesson about not judging a book by its cover.  The world saw Joan Crawford as a movie star but in her own home she was a monster (depending on who you ask).

Paramount Presents did a very good job with the transfer/Blu-ray release but the plot is ripe with confrontation and instigation that makes it difficult to watch (especially the wire hanger scene.

Download Mommie Dearest in Digital HD/4K from the iTunes store.

For more information about Mommie Dearest visit the FlickDirect Movie Database. This release has been provided to FlickDirect for review purposes. For more reviews by Allison Rose please click here.