Casting this film is one of the keys to its success. Levy not only has a similar physical appearance to Warner, but he comes across onscreen as a genuinely nice guy. 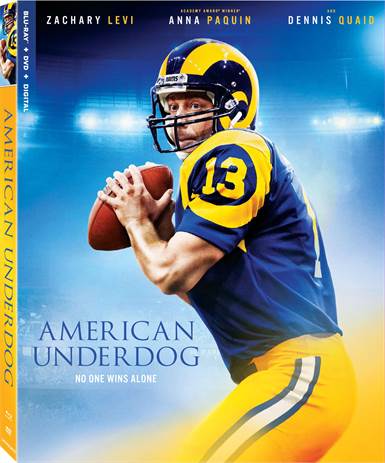 The numbers don't lie..." Over one million athletes play High School Football every year in America...Only about five percent then make it to college ball. And only one percent of those get drafted to the NFL...Most are not quarterbacks.  Only a select few will ever play in the Super Bowl.  And each year, there is only one MVP of that game..."  Anyone who has dreams of becoming a Super Bowl Champion MVP should read those statistics again.  It is a practically impossible achievement to reach and in fifty-six games only forty-eight individuals (some are repeats) have earned it.  Against all odds, one of those winners is Kurt Warner and American Underdog is his story.

Kurt Eugene Warner (Zachary Levi; Shazam!) was born in Burlington, Iowa on June 22, 1971.  Growing up he dreamed of becoming a football player and being the quarterback for a Super Bowl-winning team.  He played high school ball then college ball for Northern Iowa, where he received some positive attention in his senior year.  Unfortunately, he wasn't picked up in the NFL draft but eventually was offered a tryout with the Green Bay Packers.  While that opportunity ended up going nowhere, he was offered a spot on the Iowa Barnstormers Arena Football team and played there for three years.  That led to the St. Louis Rams, the Super Bowl and the Game and League MVP in Super Bowl XXXIV, and the realization of his childhood dream.

Directors, screenwriters, and producers Andrew and Jon Erwin (I Still Believe) are known for family-friendly, faith-based films.  The brothers subtly infuse their movies with the idea of there being a "higher power" at work without blatantly shoving in the audiences' face.  NFL quarterback, Warner has never been shy about proclaiming his faith and his belief that God and Jesus gave him the tools necessary to achieve his dreams.   Together, these three gentlemen brought people inside Warner's world with all his doubts and struggles and fears and disappointments as he battled back and became a champion in the sport he loves.

The script, adapted from Kurt's book, All Things Possible, is nothing earth-shattering and generally follows the typical pattern of a hard-working guy who doesn't give up and eventually finds success. The camera work is also pretty standard fare, with 180-degree, upward angle shots Kurt looks out into the crowd at his first outing as quarterback for the Rams.  All the usual cliques' and tropes are utilized here but, let's face it, this isn't any avant-garde or film noir creation.  It is a simple story that has a good message and is entertaining.

Casting this film is one of the keys to its success.  Levy not only has a similar physical appearance to Warner, but he comes across onscreen as a genuinely nice guy which is exactly what is needed to play this part.  Anna Paquin (True Blood) has what seems to be a spitfire personality that mimics Brenda Warner perfectly.  The only issue I had with their casting is the height difference between the two actors. However, stealing the whole show is eleven-year-old, newcomer Hayden Zaller.

The 1080p video quality offers some great visuals.  However, there are moments where there was obvious usage of green screen and those become distracting.  The colors are vibrant and pop well and there isn't any graininess to speak of (except when archived footage is cut into the film.  Then it is very obvious that is real footage, not film).

The DTS-HD Master Audio 5.1 has a strong presence especially when they are in an arena with crowds surrounding them on all sides.  In those scenes, the audio separates to make full use of the surround sound speaks.

Kurt Warner's story is amazing and proves that with a little bit of faith mixed with hard work and determination almost anything is possible. American Underdog is a heartwarming, feel-good film that doesn't pretend to be anything else.

Download American Underdog in Digital HD/4K from the iTunes store.

Listen to the American Underdog soundtrack on Apple Music.

For more information about American Underdog visit the FlickDirect Movie Database. This release has been provided to FlickDirect for review purposes. For more reviews by Allison Rose please click here. 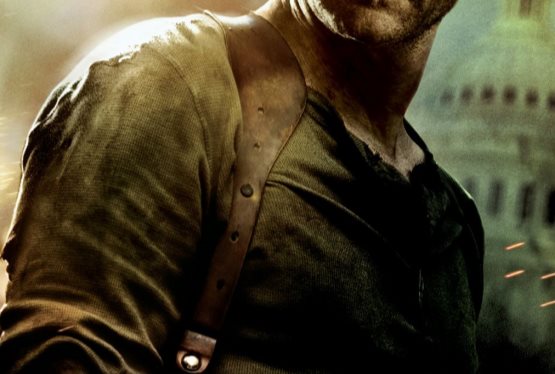