The best part of Licorice Pizza is the cast. Both leads are making their feature film debuts but you would never know it from their performances. 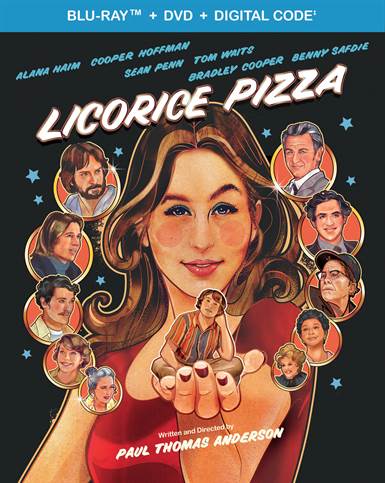 Paul Thomas Anderson (Boogie Nights) is a writer and director who is generally known for making intense, thought-provoking movies.  He has been nominated for eleven Academy Awards and eight BAFTAs in less than twenty-five years.  His films tend to lean towards the more dramatic side of human nature with bits of humor tossed in and can often include some of the seedier elements of life.  His latest movie, Licorice Pizza, seems to embody many of these traits hidden inside a coming of age rom-com which, unsurprisingly, garnered very good reviews.  Universal Pictures has recently made Licorice Pizza available for purchase on Blu-ray.

In 1973, child actor Gary Valentine (Cooper Hoffman), now fifteen years old, prepares to have his senior picture taken when he spots the photographer's assistant, twenty-five-year-old, Alana (Alana Haim). His attempts to flirt with her are rebuffed but Gary is persistent and Alana eventually agrees to have dinner with him where they strike up a friendship.  Over the course of several months, the two have a number of highs and lows as their friendship/relationship is tested.  Eventually, Gary wins Alana over and they express their love for one another.

Like so many of Anderson's stories, Licorice Pizza includes moments that would make individuals uncomfortable as Gary's and Alana's relationship plays out over the course of the film.  Not nearly the same age gap as Harold and Maude, there is still a large enough one (and at a pivotal and influential time in Gary's life) to rub against societal norms.  The tone and feel of the movie are typical of Anderson blended with the era in which the film is set.  Slightly light-hearted and "free", Licorice Pizza still carries a weight to it that is Anderson's vision.

The best part of the movie is the cast.  Both leads are making their feature film debuts but you would never know it from their performances.  Haim is a scene-stealer from the start and she exudes an almost ethereal aura, even when she is being less than kind.  Hoffman displays much of the promise seen in his late father.  Cooper's age coupled with his boyish good looks is merely the starting point for his excellent performance.  He also carries confidence much like a badge of honor.  The remaining cast includes Hollywood staples Sean Penn (Milk), Tom Waits (Seven Psychopaths), Bradley Cooper (A Star is Born), Mary Elizabeth Ellis (It's Always Sunny in Philadelphia), Christine Ebersole (The Wolf of Wall Street), etc. but the focus remains on Haim and Hoffman, deservedly so.

The 1080p resolution and 2.39:1 aspect ratio offer the picture a clear and clean presentation. The dark tones are sharp and the muted color palette (typical of the  '70s) is still eye-catching.  The DTS-HD Lossless Master Audio 5.1 elevates the eclectic soundtracks and offers a sense of the "flavor" of America in the '70s.  Dialogue is handled nicely and isn't overpowered by the music.  Aside from the digital code and DVD disc, the set offers a few extras including, Camera Tests, The Handman Scene, Fat Bernie's Commercial, and Behind-the-Scenes featurettes.

Anderson is a storyteller and a darn good one at that but his films don't appeal to all.  Licorice Pizza is designed with a certain type of audience in mind and doesn't stray from that vision.  He couldn't have picked a better cast with Haim and Hoffman showcasing their talents. The script (also by Anderson) is well written and gives the audience a glimpse of a slightly askew coming of age story.

Download Licorice Pizza in Digital HD/4K from the iTunes store.

For more information about Licorice Pizza visit the FlickDirect Movie Database. This release has been provided to FlickDirect for review purposes. For more reviews by Allison Rose please click here.