With a good script, a strong cast and terrific music, Vivo hits all the right notes. 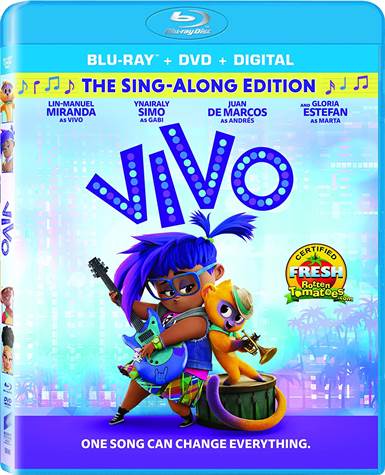 Vivo! Live! Alive! Living!, etc. All these words have similar meanings but, more importantly, they all have a feeling, an essence if you will, something intangible that simply adds joy to your life.  This "feeling" is the backbone behind the Sony Pictures Animation/Lin-Manuel Miranda penned musical movie, aptly named, Vivo.  With uplifting songs that carry the Miranda Latin flavor we have come to know and love, the film offers numerous lessons...follow your dreams, live with no regrets, never forget to tell the people you love that you love them, etc. There are so many life lessons woven into film and, after spending the last year streaming on Netflix, you can now own the movie on Blu-ray, DVD, and Digital HD.

Andrés Hernández (Juan de Marcos González; Mambo Man) has lived a long and relatively happy with his Kinkajou, Vivo (Lin-Manuel Miranda; Hamilton), in Havana, Cuba.  One day he gets a letter from his long-time friend, Marta Sandoval (Gloria Estefan; Music of the Heart) inviting him to her retirement concert in Miami, Fl.  Seizing a previously lost opportunity, Andrés decides he will sing the song he wrote for her and confess his true feelings.  Reluctant to leave Cuba, Vivo is unwilling to help Andrés on his quest, but when Andrés passes away in his sleep that evening, Vivo is suddenly determined to go to Miami and give Marta the song.

Originally conceived back in 2010 by Miranda in conjunction with DreamWorks Animation, the project was initially shelved until 2016 when Sony Pictures Animation bought it and fast-tracked it for a December 2018 theatrical release.  With Miranda on board, other talent soon followed including Zoe Saldana (Guardians of the Galaxy), Hernández, Brian Tyree Henry (Hotel Artemis), Michael Rooker (Cliffhanger), and Estefan and we are so lucky they did.  The talent is only enhanced by newcomer, Ynairily Simo as Gabi, Andrés grand-niece who helps Vivo get to Miami and Marta.

Sony Pictures Animation may not have as many films in their library as some of the other studios but they lack in quantity they make up for in quality and Vivo is no exception.  The computer-generated animation is colorful and immaculate and objects and characters pop off the screen.  Of course, the 1080p resolution of the Blu-ray only serves to add to the video quality.

When you have 11 original songs penned by multi-award-winning Miranda, you better have the audio quality on the Blu-ray to showcase the composer's talent.  While I wish this release was Dolby Atmos quality, the DTS-HD Master Audio 5.1 serves to highlight the soundtrack well.  The upbeat anthem My Own Drum is layered with instruments that sound as if you were observing a parade at Carnevale in Rio.

While there aren't many extras with this release, you do get the Blu-ray copy, DVD copy, a digital copy, a Sing-Along Edition option, a music video for the 'My Own Drum' remix, 'Behind The Animation' featurette, and Sony trailers.  The Sing Along option is sure to be a hit with the children in your house.

There have been a number of films in the last few years, many of them animated, with a Latin flare but unlike other that lean towards Mexican tradition or Columbian roots, Vivo is very much uniquely Cuban.  The powerful music, some with pounding drum beats, the animation shading, and the Hispanic/Cuban traditions added to the story all serve to take a decent script and elevate it to the next level.

It is difficult to imagine a Miranda project as anything but stellar and Vivo doesn't let the audience down. With a good script, a strong cast, and terrific music, Vivo hits all the right notes.

Download Vivo in Digital HD/4K from the iTunes store.

Listen to the Vivo soundtrack on Apple Music.

For more information about Vivo visit the FlickDirect Movie Database. This release has been provided to FlickDirect for review purposes. For more reviews by Allison Rose please click here.