Doom Patrol is a different kind of “superhero” show that works because of witty and snarky writing delivered by some excellent actors... 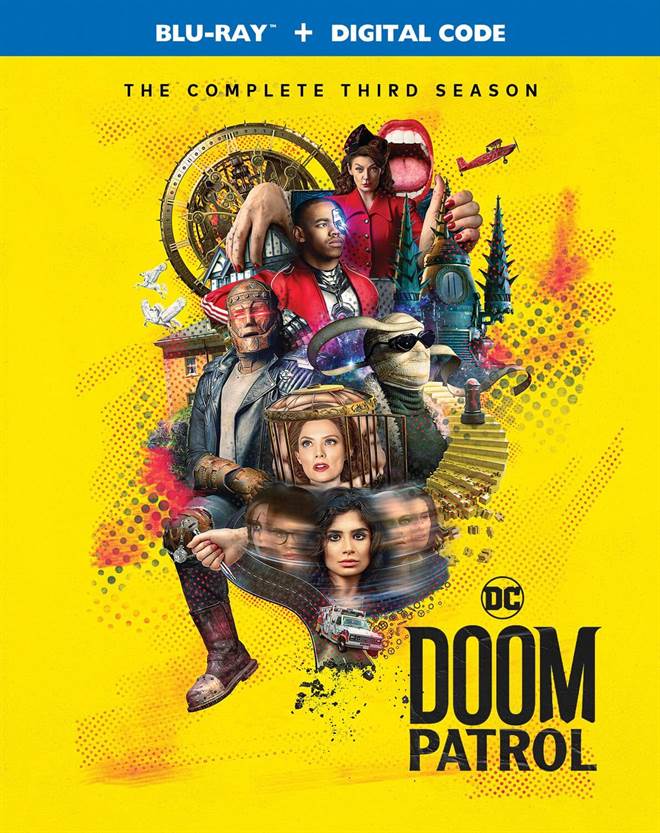 From the very first season of Doom Patrol I said they were the "misfit toys" of the DC Universe and, as season three is set to be released on Blu-ray, there is still no more accurate statement to describe this unlikely group of supernatural beings. They are a ragtag group who are seemingly, unintentionally, doing good for others while, selfishly, trying to help themselves.  They are also one step away from a group therapy session led by Dr. Ruth Westheimer (for the younger audience members who don't know who she is - Google it!).

Season Three, for those who can't quite remember, saw its share of ups and downs.  Dorothy (Abi Monterey; The Curse of Bridge Hollow) finally manages to bring her battle with the Candlemaker (Lex Lang; Paws of Fury: The Legend of Frank - voice) to an end, while the Chief/Niles Caulder (Timothy Dalton; The Living Daylights) dies of old age, leaving the others struggling to find their identities. However, the arrival of a time traveler named Madame Rouge (Michelle Gomez; Doctor Who) has the members of the Doom Patrol heading down a different path.

The Blu-ray offers the standard 1080p resolution with a 2.20:1 aspect ratio making the video quality clean.  Details are sharp, and colors and black levels are rich and deep. The tone tends to lean towards cooler shading but that doesn't diminish the overall video quality.

The DTS-HD Master Audio 5.1 is beautifully presented across all speakers.   Ambient sounds tend to lay in the rear speakers while the dialogue sits comfortably in front.  Movement is well represented as sounds float around the room.  The combo pack includes all ten episodes on three Blu-ray Discs and a digital download.  There are also a few, interesting extras for fans of the show to enjoy.  They include:

Doom Patrol is a different kind of "superhero" show that works because of witty and snarky writing delivered by some excellent actors including Brendan Fraser (The Mummy), Matt Bomer (Chuck), Diane Guerrero (Orange is the New Black), and April Bowlby (Drop Dead Diva).  With strong production values, superior acting, and well-crafted scripts, Doom Patrol is a shining star, ironically while showcasing some of the worst superheroes in the DC Universe.

With the fourth season set to debut on December 8, 2022, now is the perfect time to catch up and purchase Doom Patrol: The Complete Third Season available now on Blu-ray.

Listen to the Doom Patrol: The Complete Third Season soundtrack on Apple Music.

For more information about Doom Patrol visit the FlickDirect Movie Database. This release has been provided to FlickDirect for review purposes. For more reviews by Allison Rose please click here.