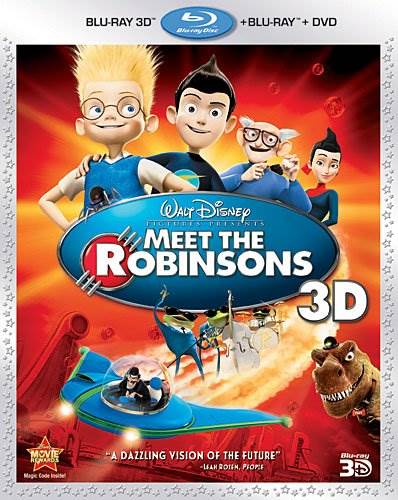 The movie can be summed up with a quote from Walt Disney himself, which appears at the end of the movie, and is an important theme for one of the plots.  "We keep moving forward, opening new doors, and doing new things, because we're curious and curiosity keeps leading us down new paths. "  From this point, the movie does a beautiful and wonderful job of showcasing that very idea from their founder.   There is even a nod to him by showing the Tomorrowland  (from the stateside Disney parks) that used to be in the movie, and calling it ‘Todayland".  Otherwise, however, the movie generally falls flat.

The story revolves around Lewis, an orphan.  We see him being dropped off at the orphanage when he is a baby and watch him quickly grow up, and seeing how intelligent he is.  Lewis spends more time studying and trying to invent new things rather than staying focused on finding a family to take him in.  After losing a chance at his latest potential adoptive family, he becomes convinced that the only parents that would take him are his birth ones and sets off to invent a device to retrieve memories from the past.  Right before his invention is to be unveiled, he is intercepted by another boy his same age who warns him that a man has come to steal his invention, and he knows this because he is in the future.  Lewis shrugs it off as a prank, which we find out that it wasn't.  Lewis and the boy set off through time to set things right, and maybe have Lewis learn about the true meaning of family along the way.  At the same time the antagonist of the story is extremely difficult to produce any feelings towards, good or bad.  I spent a good part of the movie hoping that a time lord would appear to take him out of our misery.  This as well as other items makes the story feel extremely contrived and full of numerous holes, which distracts from the overall story of that as well as Walt Disney's idea to "keep moving forward".

Now the 3D version is extremely well done, with little or no loss of brightness in the scenes, very sharp (like the 2D Blu-ray) with tons of small details that seem to pop in the 3D version compared to the 2D version.  Additionally, the digital audio adds to the sense of true 3D with full surround sound to complete the experience.  So while the story isn't that great, the 3D animation is, so if you are looking for one of those movies to showcase your system, this one should be on your shelf.

The Blu-ray includes several bonus features, including deleted scenes, a making-of "Inventing the Robinsons", several games, and music videos featuring songs played during the movie.  The combo pack includes the 3D Blu-ray, the 2D Blu-ray, and a DVD copy of the film, but no digital copy.  A good value even though a digital copy seems to be the new standard for any combo pack.