Gilpin is great and Swank is downright deplorable herself as the evil mastermind behind The Hunt. It helps that they are surrounded by a whole bunch of actors that play their parts well. 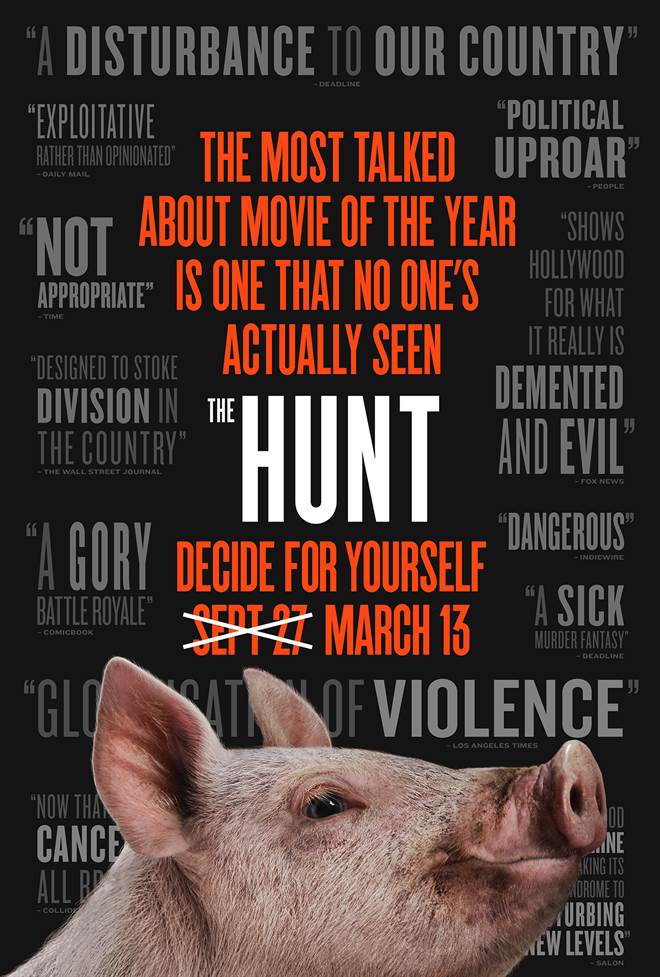 When I was in high school (and we won't discuss how long ago that actually was), I remember reading a short story in English class about someone who was invited to a private island by a wealthy gentleman.  Once the stranger got there he realized he was being hunted by the owner.  This year I was reminded of that story when I finally got to watch Universal Pictures'  The Hunt.  Somewhat similar in concept, a group of eleven strangers wake up in the woods surrounding a large, open field and over the course of the next several minutes they find out they are the prey against some heavily armed predators.

These were no random strangers though.  They were chosen for a  very specific purpose.  What they all had in common was that they were all conservatives who at some point spoke out on the internet against liberals and their ideals.  The predators were a group of liberals, several of whom got fired from their jobs because they were making jokes about participating in something called "Manorgate" and texting about the "deplorables" A.K.A the conservatives they were now hunting.

As they wake up bound and gagged, they find each other and a large crate filled with a pig and a cache of weapons.  When they realize they are being fired upon they start to fight back and try to escape.  Unfortunately for them, the woods are booby-trapped and many of the original eleven never make it past the wire fence surrounding the field and woods.  Eventually, most of the deplorables are killed but one woman, Crystal Creasey (Betty Gilpin; Isn't It Romantic) has tactical and survival training as a former soldier and she hunts down the ring leader, Athena (Hillary Swank; Million Dollar Baby), with the intent on killing her.

Gilpin is great and Swank is downright deplorable herself as the evil mastermind behind the whole hunt. They are surrounded by a whole bunch of actors that play their parts well.  From Ike Barinholtz (Suicide Squad) to Wayne Duvall (O Brother, Where Art Thou?) and Ethan Suplee (Remember the Titans) to a hilarious cameo by Emma Roberts (Nerve), each character has a purpose, and the actors who portray them help to make the film unique.  Of course, Director Craig Zobel (Compliance) helps them bring out their violent sides in order to make the film as bloody as possible.

The Digital HD video quality highlights the gore as only it can with blood and guts splattered everywhere. The audio is just as strong with guns and bombs exploding all around the viewer.  There are only three short special features including: Crafting the hunt, death scene breakdowns, and Athena vs. Crystal: Hunter or Hunted?  Anyone who enjoys stunts will like the last extra while the first one is all over the place talking about characters and actors and then switching to sets, etc. in a frenzied five-minute overview.

Originally slated for a September 2019 release, the controversial film got pushed back to March 2020 only to be canceled again due to Covid-19.  Not only are the political undertones rather blatant and polarizing but the violence was considered too disturbing in September after the United States suffered two mass shootings in August.  Not that the delay would make much of a difference since the film is decent but not award-worthy. Interestingly though, this blood bath does have several humorous moments breaking the tension and suspense.

The story could have been interesting and somewhat unique but the political climate of this country just couldn't handle a story like this right now.  I can only hope future generations will look back at this movie as ancient history.

It is an interesting social commentary and if you love guts and gory, bloody scenes then you should definitely check out The Hunt.

For more information about The Hunt visit the FlickDirect Movie Database. This release has been provided to FlickDirect for review purposes. For more reviews by Allison Rose please click here.

The Hunt images are © Universal Pictures. All Rights Reserved.