Besides Miranda, the cast is made up of incredibly talented artists who took Miranda’s brilliant score and breathed life into it despite being some of the most challenging songs to perform live. 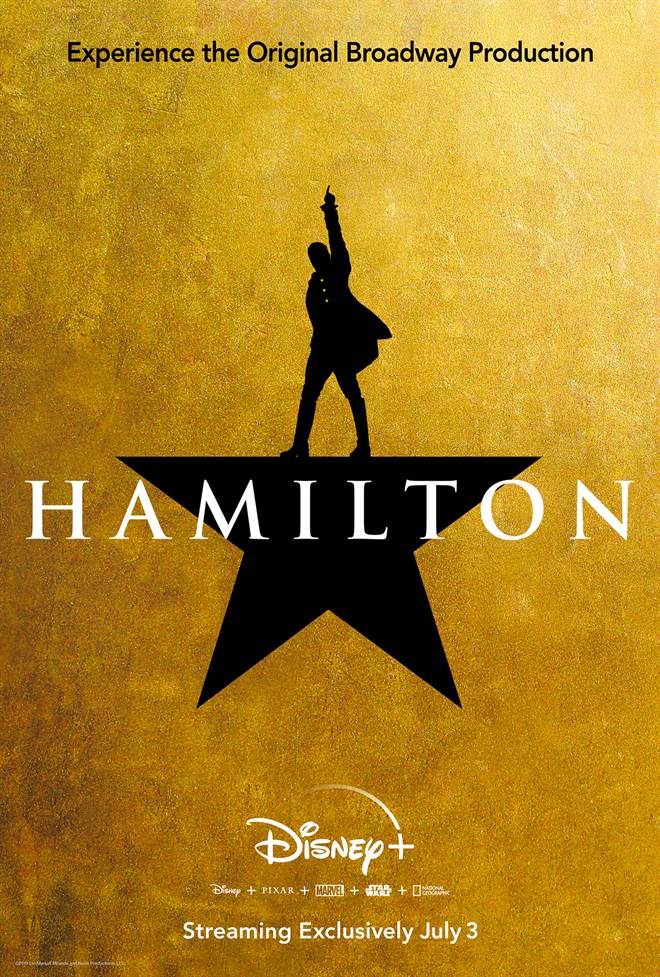 In 2004 biographer and historian Ron Chernow (Washington: A Life) wrote the book Alexander Hamilton about one of this country's founding fathers and the first Secretary of the Treasury.  While on vacation from his musical In the Heights, Lin-Manuel Miranda read the book and, after the first few chapters, decided he wanted to make the story his next project.  He started writing The Hamilton Mixtape and performed what would later become the opening number in the show, Hamilton, at the White House Evening of Poetry, Music and the Spoken Word in 2009.

By March of 2015, Hamilton: An American Musical was an off-Broadway, critical hit, selling out each performance. In August of that same year, it moved to the Richard Rogers Theater on Broadway and has been a sensation ever since.  At the 2016 Tony Awards, the musical was nominated for a record-setting 16 awards winning 11 of them including "best musical".  It was only a matter of time before fans would be asking for a movie adaptation and, while that isn't exactly what they got, Disney+ heard them and this month a movie of the stage show premiered, again to critical acclaim.  Filmed partially in front of a live audience and partially with a camera crane in place of people, the show is a combination that offers viewers better than the best seats in the house.

Alexander Hamilton was a bastard child born in St. Croix. His father left when he was a baby and his mother died before he was a teenager.  After a hurricane hit the island, Hamilton wrote a touching poem and the people of the Island realized he was extremely intelligent, so they raised money to send him to New York to be educated.  Years later, during the Revolutionary War, he worked with General Washington and became part of President Washington's cabinet after the Colonies fought to gain their freedom.  Brilliant yet impetuous, Hamilton made many enemies and in 1804 he spoke out against his former colleague Aaron Burr.  Burr challenged Hamilton to a duel and in July the two men met in Weehawken, NJ where Burr fatally shot Hamilton.

While the stage production covers most of the basics of Hamilton's story including his infidelity and momentarily touching upon the rumored homosexual relationship with John Laurens, it takes a "poetic license" with many of the facts surrounding Hamilton's life and the history of the United States.  It also is unique in other regards including the casting of minorities to portray Caucasians in history and the fact the music is primarily rap, hip hop, and Rhythm and Blues, which is atypical amongst musical scores.  Hamilton: An American Musical, created by and originally starring Lin-Manuel Miranda (Mary Poppins Returns) is a refreshing, rare show that has spoken to a whole new demographic of the population not often associated with Broadway fans.

Besides Miranda, who is actually one of the weaker links among the performers, the cast is made up of incredibly talented artists who took Miranda's brilliant score and breathed life into it despite being some of the most challenging songs to perform live. As an example, Daveed Diggs (Snowpiercer) who portrays Marquis de Lafayette/Thomas Jefferson, raps 19 words in less than three seconds, which is an incredible feat.  Phillipa Soo (The Broken Hearts Gallery) as Hamilton's wife, Eliza, is a delicate songbird with a magical voice whereas Renee Elise Goldsberry (One Life to Live), as Eliza's older sister, Angelica, sings with strength and power.  Christopher Jackson (Bull) as George Washington and Leslie Odom, Jr. (Smash) as Aaron Burr also offers incredible performances.  Of course, Jonathan Groff (Glee) as King George, steals all of the seven minutes he is on stage.

Director Thomas Kail (Grease Live!) utilizes the crane to offer some close-up shots of the characters that one would normally never have the opportunity to see in a live stage performance.   He also does a good job, for the most part, of blending the live audience moments with those shot to an empty house.  Unfortunately, the amazing orchestra and singers betray the mixing of the two and there are several moments the viewer can tell the difference aurally of what was filmed before an audience.

There is no doubt, Miranda, the cast, and Kail (along with choreographer Andy Blankenbuhler; Cats) turned Broadway upside down and challenged the idea of the traditional musical when it debuted.  It is a natural progression to film it as a movie and, luckily, it is very well done offering those that don't have the opportunity to see it live the chance to experience the magic that has set a higher bar for Broadway musicals.