Boys State takes a little time to get started but once it does it is engrossing, dynamic and well done. 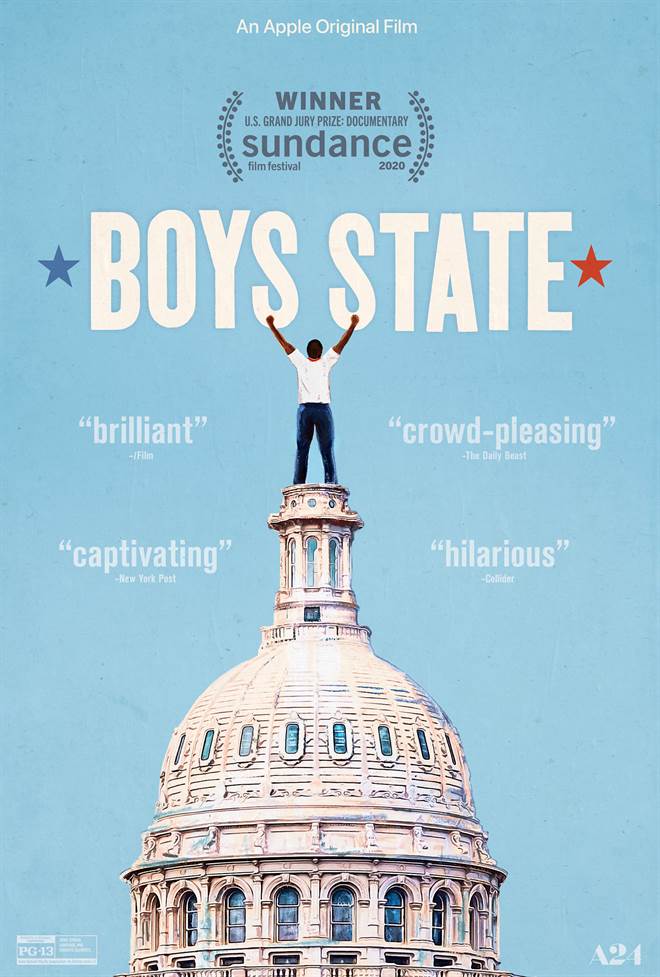 In 1937 the American Legion created essentially a one-week summer camp for high school students who will be entering their senior year after summer.  Young Men and young women are nominated by their high schools and are then chosen by Legion members to attend what amounts to "politics camp" at a college within their state.  There they are broken up into two parties and throughout the course of the week, they elect members of their parties for various political positions, culminating in the election of a governor who would oversee the entire state.  The 2020 documentary, Boys State, follows the 1,000 young men who attended the Texas camp in the summer of 2018 for a weeklong lesson in politics.

The film begins with a brief glimpse of the selection process and the chosen participants boarding a bus to Austin.  There one thousand young men from all over the state assemble and are split in half.  Then the fun begins as they must get petitions signed by other members of their party to even get on the ballot.  Enter Steven Garza - a quiet young man of Hispanic descent who decides to run for the highest office there is...Governor.  We watch as he struggles up until the last few hours to obtain the signatures needed to get on the ballot.  He is clearly the underdog whom you want to root for after he gives his first speech to the gallery.

Steven is intelligent, honest, decent, and, once you get to know him, extremely likable.  After a runoff vote, he wins his party's nomination and the respect of many of the members of Texas Boys State.  However, the opposition uses Steven's organization of an anti-gun rally to slander him among the very conservative, NRA-supporting, second amendment rights, anti-abortion attendees of Boys State.  They also unapologetically run a smear campaign against another member of Steven's party, viciously attacking his actions which ultimately may cost Steven the election.

Directors Amanda McBaine and Jesse Moss offer insight into this 80-plus-year tradition while focusing on a few key players.  It is interesting to see how much knowledge of and passion for politics these young men have.  It's also scary and disheartening to see how ruthless they can be. There is maturity mixed with moxie mixed with teenage boys' hijinks.  Yet underneath it all, they share intelligence and drive which makes the viewer have some hope for our future.

Sadly, it is also a lesson in stark contrasts.  Steven runs a campaign with heart and humility while his opposition slings insults and accusations.  Even more disturbing is that they do so without apology or a sense of remorse. As a viewer, it makes one sad and angry that someone so young can show no empathy for others. Yet, it is also uplifting to see that there are still people in this world like Steven who genuinely listen to others and who take their ideas and feelings into consideration.  Interestingly, one could equate Steven and his opponent to the presidencies of Obama vs. Trump.

I'm not a very political person but I found this documentary interesting and engaging. I also found it infuriating and exasperating but I guess that is why I don't like politics in general - The best person doesn't always win, especially when sabotaged by one's opponent.

Boys State takes a little time to get started but once it does it is engrossing, dynamic, and well done.  Even if you aren't a fan of politics or documentaries, I recommend you spend less than two hours of your time watching this movie.

Running Time: 109 minutes
Distributed By: A24

Boys State images are © A24. All Rights Reserved.