Director Henry Selick is no stranger to stop-motion animation and his distinct style can be seen throughout the movie. 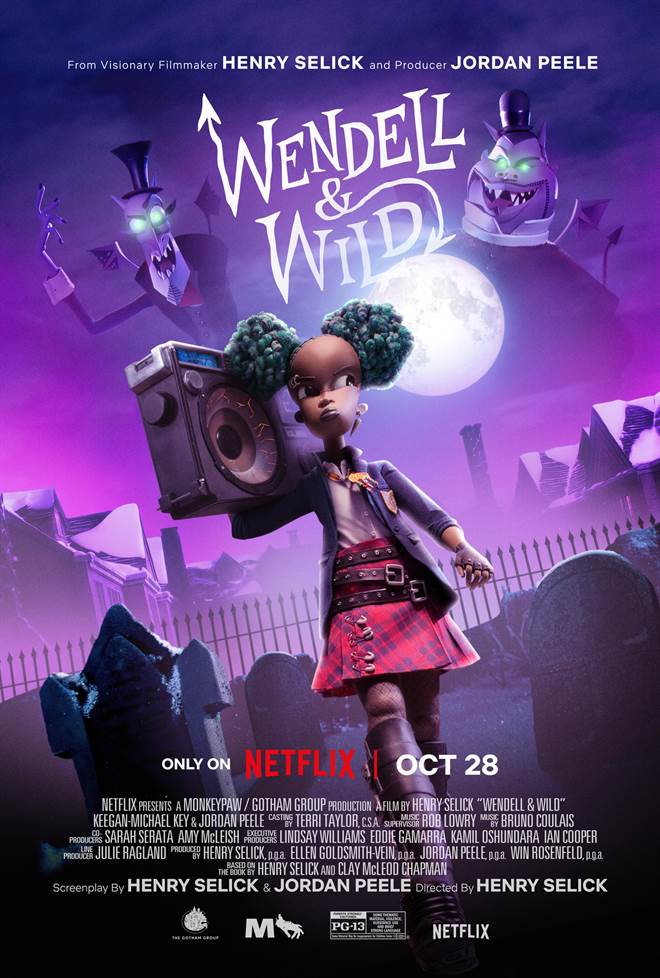 Making movies, like so many other creative pursuits, is an art form.  To take words on a page and transform them into moving pictures is a gift.  A genre of filmmaking that is literally artwork on screen is animation and if animation is drawing and paintings, then stop motion animation is storytelling through sculpture.  A long and difficult process, stop motion animation is a technique in which a camera is repeatedly stopped and started and inanimate objects and figures are placed in different positions frame-by-frame, in order to give the impression of movement.  The latest entry in this type of filmmaking is the Netflix animation movie, Wendell and Wild.

Kat (Lyric Ross; This Is Us) is a troubled, thirteen-year-old girl who blames herself for her parents' deaths.  Her one last chance at rehabilitation is at an all-girls reform school back in her hometown, which has become a shell of what it once was.  Once there, Kat is bit by a strange animal that leaves a mark on her hand.  Upon seeing the mark, Sister Helley (Angela Bassett; Black Panther) recognizes it as the sign that Kat is a Hell Maiden who can raise demons from hell.  When her personal demons, Wendell (Keegan- Michael Key; Predator) and Wild (Jordan Peele; Keanu) make a deal with Kat to raise her parents from the dead, she reluctantly agrees to bring them to the surface when, once there, they create havoc.

Director Henry Selick (Coraline) is no stranger to stop-motion animation and his distinct style can be seen throughout the movie.  His use of dream sequences and flashbacks that seem a bit hazy adds to the overall feeling of dread and confusion of the film.  His expertise throughout his animation career makes this latest endeavor a treat to watch.  From the dark and sinister feel overall to the moments of color that pop off the screen, the movie is eye-catching and mesmerizing.

The cast was well chosen with Key and Peele leading the way.  Their well-honed banter lends itself to these two brothers making their characters believable.  However, I'm not sure why the writers (one of which being Peele), chose the name "Wild".  There are other names beginning with the letter W that would have worked just as well, if not better than Wild.  Wilson, William, Walter, etc. all would have worked.

Ross is a talented young woman who uses just the right amount of sass and inflection in her tone to get her point across without coming across as bitchy.  Bassett plays a kind, but the no-nonsense type of individual, allowing Kat to trust Sister Helley from almost the start.  Other cast members; Ving Rhames (Pulp Fiction) and James Hong (Big Trouble in Little China); round out the cast well and help to create a cohesive unit.

The music needs to be recognized because, like so many of Selick's animated features, it becomes a character of its own.  This time he uses a blend of hip-hop and reggae to create a gritty yet upbeat feel to the movie which is ironic because the movie's central themes are destruction and dying.

Wendell and Wild continues a tradition of beautiful, stop-motion animated films that are at once unique and awe-inspiring. The plot is cute and, like so many of its predecessors, Wendell and Wild achieves a level of creepiness that can only be found using stop-motion techniques.

Coming to Netflix just in time for Halloween, it is a good movie that can be enjoyed by the whole family.

Listen to the Wendell & Wild soundtrack on Apple Music.