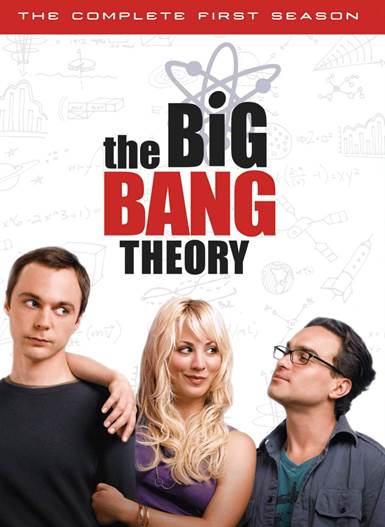 Purchase   DVD/Blu-ray/4K UHD
The Big Bang Theory comes back for a second season this year and if you want to catch up on it, you can get the first on DVD. The key questions you should be asking yourself, if you have not already seen some of it and like it, is why would you want to? The show hinges on the two main characters: Sheldon (Jim Parsons, a tall, thin, and very socially inept) and Leonard (Johnny Galecki, a shorter, thick glasses, and only modestly socially dysfunctional), their knock-out neighbor Penny (Kaley Cuoco, who dresses for sex appeal even though the show isn't especially racy), and their two friends (Simon and Kunal who are even nerdier than the principles).

The comedy heavily leverages a laugh-track and I found myself cringing as the studio audience laughed at everything. The situations are basic and somewhat repetitive: Leonard and Sheldon face a crisis where their genius doesn't simply solve the problem and they have to awkwardly interact with Penny or her friends. The show is generally light and the humor focuses on either the extreme geekiness of the characters (who in one scene are all playing a video game and utterly ignore four knockouts coming in to offer them sex ... as a test to see if they'll stop playing. They don't) or their inability to figure out women or interact normally in life.

Is The Big Bang Theory funny? I give it average marks. I think it's aiming for a wide swath of potential audience members and as such necessarily lacks the venom or bite that would make it edgy. It's good natured, which is something, and it while a lot of the comedy centers on the characters being in embarrassing situations (in the pilot they are asked to retrieve Penny's TV from her ex-boy friend and when they confront him, he turns out to be a weight lifter jock who takes their pants) it isn't really cringe inducing. The three leads actually do have good chemistry and there's sufficient physical-comedy to keep it from simply being a drag.

Is Theory smart? The single bonus feature on the DVD, a making-of with producers Chuck Lorre and Bill Prady tells us they actually got a "real physicist" (unnamed) to make sure "the science was real." They extolled the virtues of the white-boards in the character's apartment actually being real physics. This, unfortunately, does not make the the show "smart." I give it a C+ or maybe a B for science-jargon. It's better than Star Trek but when one of the characters mixes DNA to breed glow in the dark night goldfish as night-lights, while I recognize it as a reference to actual biology experiments with glowing mice, I also know that he wouldn't be able to do it like he did--and isn't he a physicist anyway? I mean, these characters don't portray real science, just a comedic caricature of it.

Does Theory get geek-dom right? I was eager to watch the making-of piece because it promised a "look behind the scenes" into "geek chic." I wanted to see if the producers actually had an understanding of the culture--or a love of it. While Leonard and Sheldon are not actually "cool," the show doesn't despise them either. I was pretty disappointed on that front--both with the entire season and especially with Lorre and Prady's understanding of their material.

It's not that the show completely fails to deliver: clearly the writers are pretty geeky. It's that either no one involved is really a geek--or they just can't manage to make the scripts with deeper in-jokes work. I think this is most clearly seen when the characters are discussing the physics of superman catching a falling Lois Lane. It is presented to the audience as proof that one of the characters is really smart that he knows that catching Lois at two feet below the ground in his steel-hard arms would simply kill her as though she impacted with steel two feet before the concrete (he actually says she would be split into three pieces). The dialog is extended to present this concept to the audience.

I think this concept something that is not actually surprising to the audience. It's been touched on many times before as far back as Larry Niven's Man of Steel, Woman of Kleenex and most recently and relevantly in the Superman Returns movie when he tries to grab a falling airplane and rips the wing off.

Theory's jokes aren't bad--but they aren't deep either. I see no evidence that it shows an insightful understanding of comics (say in the way Quentin Tarantino periodically does. The characters play World of Warcraft--but I don't see any serious in-jokes there.

Now it's probably true that Theory wouldn't be "better" if it were stuffed with jokes only serious aficionados would get--that's not the point. The point is that if you are going to make a comedy about super-smart ultra-geeks if you are aiming for a wide audience you are probably going to have to dial it down so much that it becomes scenery rather than selling point. Theory knows only a little more about super-genius geeks as Three's Company knew about same-sex couples.

Download The Big Bang Theory: The Complete First Season in Digital HD/4K from the iTunes store.