Home / Reviews / Guardians of the Galaxy

Guardians of the Galaxy Theatrical Review

Following suit with just about all of the Marvel franchises to date, Guardians of the Galaxy will delight fans. 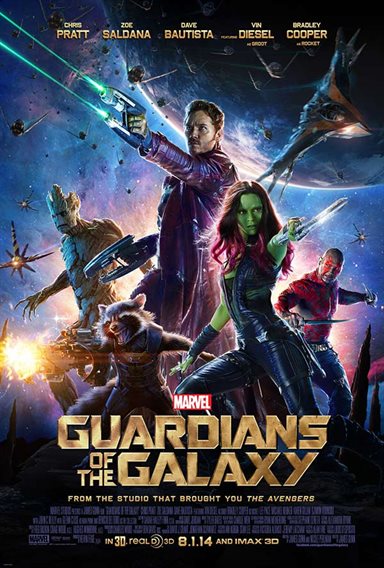 Purchase  DVD/Blu-ray/4K UHD
Marvel Studios does it again!  Cliche? Yes, and yes.  About that...

We begin by meeting Peter Quill/Star-Lord (Chris Pratt) as a young boy (not) coping with his mother's death, and abducted by an alien ship. Rather than deliver him (to whom, we have yet to discover…his extraterrestrial father, Jason, or one of his foes, perhaps), his captors, The Ravagers, become his surrogate family at the behest of their leader, the blue-skinned Yondu (Michael Rooker) who assumes, in a twisted turn, a paternal role.  From this, adventurer Peter Quill/Star-Lord, the poor man's "Tony Stark," is nee.

Star-Lord transverses the universe in his beloved vessel, The Milano (much like one of Tony Stark's many high-priced, high performance pieces of machinery), collecting a string of intergalactic, interspecies notches on his bedpost (again, reminiscent of Stark's romantic escapades), looking out only for himself on his way to betraying "father-figure" Yondu.  Pratt is phenomenal as Peter Quill/Star-Lord.  Endowing him with a tenderness full of bravado, and loads of humor.  His wry, sardonic delivery of pithy remarks will keep you laughing throughout even the most intense fight scenes.  (Did I mention the opportunity to show that all the hard work with trainers and nutritionists to prepare for the film paid off?)

In a scene that feels a lot like a cosmic Indiana Jones opener, Star-Lord retrieves (steals) a mysterious orb that makes him the target of an unrelenting, action packed, high speed chase through the galaxies.  Narrowly escaping certain death at the hands of Korath (Djimon Hounsou), one of evil Ronan's (Lee Pace) villainous hunter henchmen.

Once again, the Marvel Cinematic Universe presents us with a seemingly unlikeable rag-tag bunch of misfits, and transforms them into a tender, respectable team of heroes so…badass, we all want to be one.  First, we meet Gamora (Zoe Saldana taking on a new hue without the benefits of post-production application).  Thanos' favored daughter, adopted after annihilating her family and people, she is his personal assassin, a trained warrior.  In spite of the full body make-up which took a reported five hours each day of shooting, Saldana as well as her stunt double (Chloe Bruce) manage to pull off some kick-ass fight scenes.  One well coordinated and engaging chase/fight scene has Gamora and Star-lord alternately wrangling a mysterious, powerful, and coveted orb from one another repeatedly one-upping each other culminating in their arrest and detention alongside Rocket Raccoon (Bradley Cooper) and Groot (Vin Diesel).

Bradley Cooper calls upon his alter ego…a narcissistic misfit with strokes of inferiority complex, a dash of Tourette's, and a tender blanket within which to wrap it all.  He is Boy to Groot's Velveteen Rabbit.  It is his loving though reluctant commitment to his team and their common cause that endears us to Rocket Raccoon.  His playful charm is delightfully entertaining while occasionally bordering on obnoxious.  It depends what side of the pun you're standing on.  Vin Diesel really has to stretch here…his dialogue, at it's greatest extent, consists of three words.  Still, Diesel manages to infuse life, emotion and…yes, range to those few words.  Who knew?

In prison, we meet the final misfit 'Guardian', Drax the Destroyer (Dave Batista), a gruff, seemingly one-dimensional character.  His literal interpretation of all dialogue provides for hilarious banter between Drax and Star-Lord.  Here the chemistry between Batista and Pratt is evident; it was in an impromptu screen test with Pratt that led to Batista being cast in the role of Drax.  Batista drifts in and out of simpleton-dom giving us morsels of pain, remorse, and tenderness.  He embodies the persona of Drax, humanizing him, and providing the ability to connect with Gamora through their shared tragedies at the hands of Ronan and Thanos, respectively.

The group breaks out of prison sending the Guardians of the Galaxy on a wild intergalactic, shoot-out, chase extraordinaire throughout the galaxy.  Worthy of mention are performances by Lee Pace as Ronan (who knew he could be so evil!), and Karen Gillan as Nebula (chillingly sadistic).  Also, the classic 70s tunes that compile Volume 1 will surely find their way on the playlist of an entirely new generation.  The songs connect Peter Quill with his mother, and the audience with the film.  Following suit with just about all of the Marvel franchises to date, Guardians of the Galaxy will delight fans.

Watch FlickDirect's Interview with Dave Batista on our YouTube channel.

Purchase a DVD/Blu-ray/4K UHD physical copy of Guardians of the Galaxy today at Amazon.com

Download Guardians of the Galaxy in Digital HD/4K from the iTunes store.

Listen to the Guardians of the Galaxy soundtrack on Apple Music.

For more information about Guardians of the Galaxy visit the FlickDirect Movie Database.