Home / Reviews / Spiral: From The Book of Saw

While the original Saw movies were gory and psychological in nature, Spiral adds more of a dramatic element to the mix. 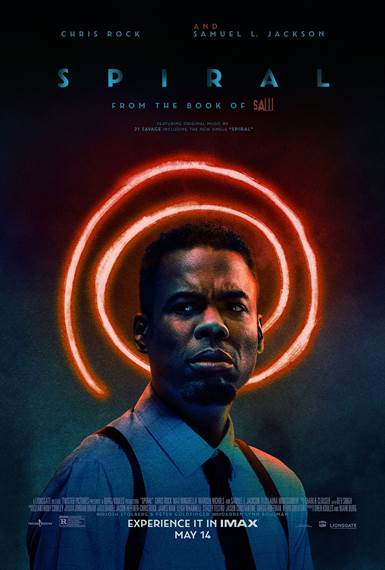 There are various subgenres under the movie category horror.  Some are blood and gore and carnage, some are psychological thrillers, and some are both.  Back in 2004, the world got a glimpse of the latter when Saw became an international hit. Over the next thirteen years, seven more films were released to varying degrees of success.  The ninth movie, Spiral: From the Book of Saw, opens in theaters today and the "buzz" and hype surrounding this latest installment is probably enough to get horror fans back into movie theaters.  Boasting some A-list actors, Spiral brings promise to the idea of possibly rebooting the franchise.

Detective Zeke Banks (Chris Rock; Dolemite is My Name) is the outcast of the police department.  Not only is he the son of the former Chief, Marcus Banks (Samuel L. Jackson; The Hitman's Wife's Bodyguard) but he took down a dirty cop years ago and is now considered a "rat".  When Officer Barrett (Morgan David Jones; Jupiter's Legacy) is gruesomely murdered, Banks and his new partner, William Schenk (Max Minghelia; The Handmaid's Tale) are sent to investigate.  Discovering they have a copycat killer on their hands, Banks and Schenk must decipher the clues before more (crooked) cops end up dying.

While the original Saw movies were gory and psychological in nature, Spiral adds more of a dramatic element to the mix.  Between the bloody, twisted revenge sequences, we get some of Zeke's backstory, a look at his relationship with his father, and his lonely, messed up surroundings where he always needs to watch his back. We also see Zeke's frustration with his inability to catch up to the killer until it is too late, and more cops are "tortured" and killed by a madman.  Interestingly, Banks could turn his back on those crooked cops who did him wrong over a decade before, but he doesn't.

Minghelia is good as the rookie trying to soak up everything he can.  Marisol Nichols (Riverdale) interestingly plays Captain Angie Garza, a no-nonsense, level-headed leader who watches as her staff is picked off one by one.  Rock is merely decent and at one point he looks and sounds like an amateur first learning his craft. This makes for an uneven performance on his part and in one of the earlier scenes in the movie made me question if he should simply stick to comedies.  Of course, one would be remiss to ignore the brilliant acting ability of Jackson who curses up a storm as part of his persona (but what else is new).

I'm fascinated by serial killers and especially ones who create elaborate ways to torture their victims before murdering them.  I also tend to find those sorts of scenes difficult to watch so, not surprisingly, I haven't seen many of the Saw films.  My knowledge base on the franchise is a little limited but even I could tell this new film wasn't going to reinvigorate the franchise as I'm sure Lionsgate had hoped.  Having said that, there is rumored to be a Saw X in the works so fans can rejoice to see what could come next.

As I have stated before, horror movies, especially successful franchises, have a built-in audience that will head to theaters to watch the latest movies in the franchise but right now I'm not sure that anyone else will.

I don't doubt that Spiral will turn a profit (see what I did there?) and fans will be begging for number ten, I just hope it can exceed the expectations set by Spiral.

Purchase a DVD/Blu-ray/4K UHD physical copy of Spiral: From The Book of Saw today at Amazon.com

Download Spiral: From The Book of Saw in Digital HD/4K from the iTunes store.

Listen to the Spiral: From The Book of Saw soundtrack on Apple Music.

For more information about Spiral: From The Book of Saw visit the FlickDirect Movie Database. For more reviews by Allison Rose please click here.

Spiral: From The Book of Saw images are © Lionsgate. All Rights Reserved.