West sets out to make a bloody, heart pounding horror movie with X, and, for the most part, succeeds beautifully. 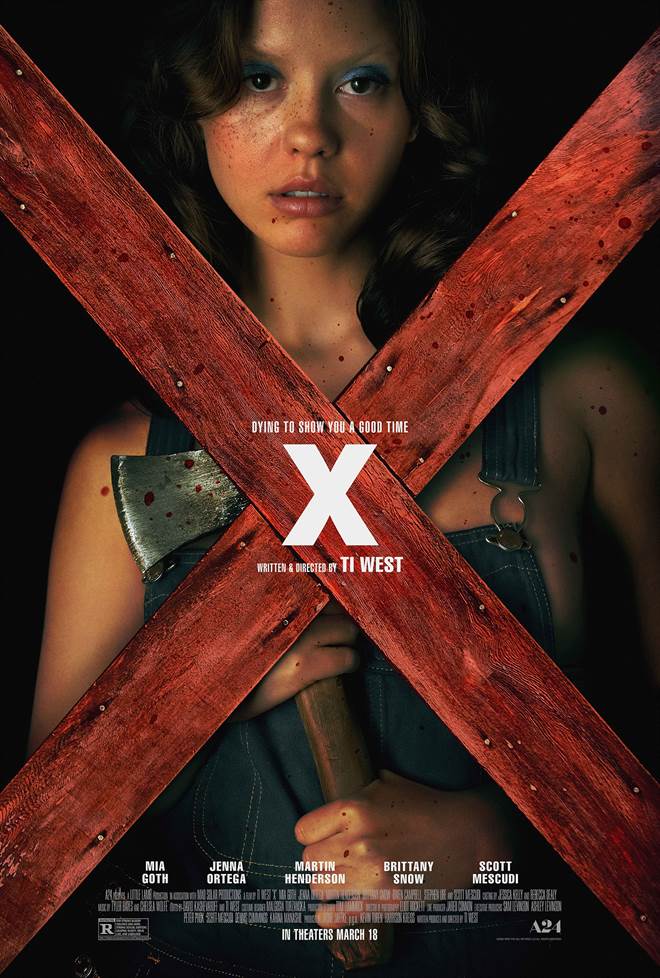 How does the old saying go?  "Youth is wasted on the young".  Irish playwright and author George Bernard Shaw (Pygmalion) is said to have expressed that sentiment in 1931.  He elaborated on its meaning at some point later by stating, "they're brainless, and don't know what they have; they squander every opportunity of being young, on being young."  Perhaps that is what writer/director Ti West (The House of the Devil) was focusing on when he created the character of Pearl (Mia Goth; Suspiria) in his latest film, a horror movie titled simply, X.  The suspenseful, bloody, and occasionally, unintentionally funny movie premieres this week.

West sets out to make a bloody, heart-pounding horror movie and, for the most part, succeeds beautifully.  His harsh way of filming injuries and fatalities never shies away from presenting detailed, disgusting, and graphic moments throughout the movie.  He also infuses X with long, slow, single-take shots meant to build suspense and throws in a few jump scares for good measure.  He makes you anticipate what could be coming next but then pulls back to draw out the suspense even longer.  It is clear West knows how to direct a horror film and if one wasn't quite sure, they merely need to watch X to see that he is an expert.

Brittany Snow (Pitch Perfect) takes on an older, more mature role here than she has in the past.  Her Texas twang and big hair full of hairspray are stereotypical of the styles back in the late '70s.  Jenny Ortega (Scream) plays the filmmaker's (who happens to be her boyfriend) assistant who becomes intrigued by making the porn movie and wants to join in.  This is Ortega's second horror film of 2022, and we are only three months in (I jokingly walked out of the movie and, when asked my opinion of X, said, "I still prefer the Babadook" - if you don't know what I meant, you need to watch Scream).  Goth, as Maxine, is this carefree spirit who doesn't seem to be afraid of anything.  It is only at the end of the movie that some of the finer details fall into place. Making the film even more interesting.

While I'm not a fan of Horror movies, with all the blood and gore, I can appreciate the time and technique put into creating a convincing and compelling story that happens to be scary and flowing with blood at almost every turn.  However, there are two things about the movie that bothered me.  First, the long, drawn-out, slow-moving shots, while meant to build suspense, are too long and at moments I could feel myself rolling my eyes and thinking, "Come on already!".  Second, I tend to be analytical by nature so when the almost 2-hour movie doesn't explain the motivations of the killer and why that person could possibly be the way they are...what they are thinking, why are they killing people...I tend to get confused, annoyed, and disinterested. Interestingly, the ending offers some "breadcrumbs" as to why the killings were happening and, once the movie premiered at SXSW, it was immediately announced a prequel had already been filmed in secret so there would be another X movie which would offer the explanations I so desperately desire.  I can now say I am eager to see the prequel.

I salute you, Ti West.

Running Time: 105 minutes
Distributed By: A24

X images are © A24. All Rights Reserved.