Curtis is the brightest star here and she does her character proud. 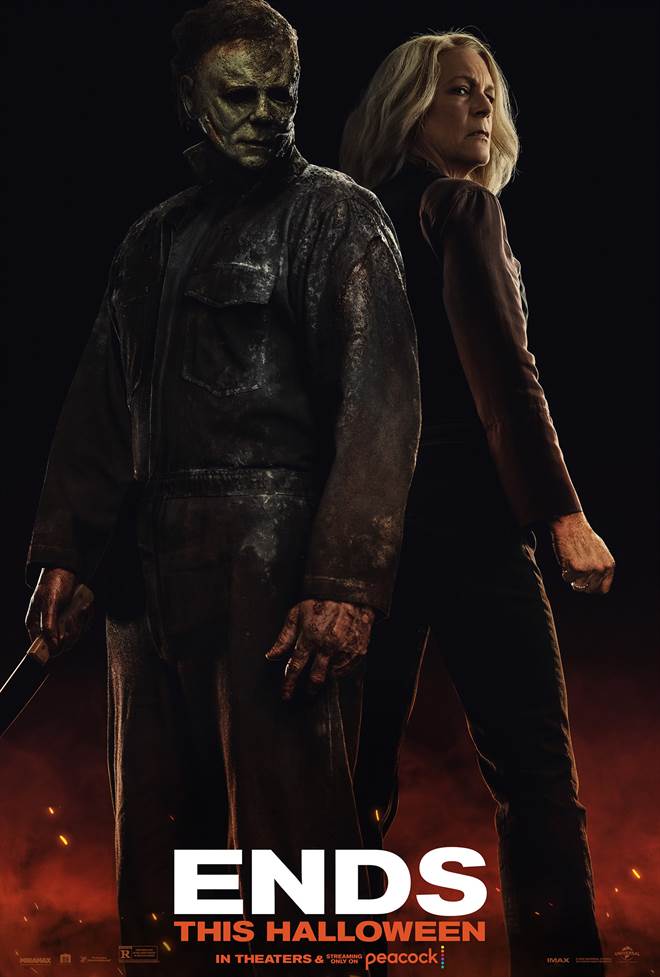 Have you ever been eating something and you just can't get enough of it?  Snacks? Steak, etc.?  Then you feel yourself getting full and you think "maybe I should stop eating now" but then you just can't and you keep eating until suddenly you realize you have eaten too much of a good thing and you may be sick?  Then you should completely understand what I mean by saying "Welcome to Halloween Ends".

For the few out there who don't know the Halloween franchise, it began in 1978 when the first movie premiered and introduced the world to Michael Myers.  Myers was a deeply disturbed person who started his killing spree in 1963 when he murdered his older sister.  He then spent time in a sanitarium for the criminally insane until, while being transported to court for his trial, Michael escapes and makes his way home to Haddonfield. There he sees Laurie Strode (Jamie Lee Curtis; Knives Out) and stalks her and her friends, killing the latter. Over the next forty-three years, Michael Myers has stalked and murdered probably close to one hundred people but Strode always seemed to have eluded him.  This week, we finally get to see this nightmare end in Halloween Ends.

Laurie and her granddaughter, Allyson (Andy Matichak; Assimilate) decide to live in Haddonfield which has grown nasty and somewhat violent on its own, without help from Myers.  There Allyson meets Corey Cunningham (Rohan Campbell; Snowpiercer), a young man who was acquitted of accidentally killing a young boy while Corey was babysitting him.  Together they draw tons of attention to themselves because of their pasts and the murders which seem to haunt them.  When Michael Myers suddenly returns, Laurie, Allyson, Corey, and the residents of Haddonfield lives change forever.

I feel the need to paste a portion of the Wikipedia entry for the Halloween franchise...Eleven films have followed since the 1978 original was released. Michael Myers is the antagonist in all of the films with the exception of Halloween III: Season of the Witch, a story with no direct connection to any other film in the series. In 2007, writer-director Rob Zombie created a remake of the 1978 film. A sequel to the 2007 film was released two years later. A direct sequel to the original film, which ignores all previous sequels, was released in 2018. The sequel to the 2018 film, Halloween Kills was released in 2021 with the final sequel Halloween Ends, scheduled for release on October 14, 2022.   Ummmmm...WHAT!?!  That pretty much sums up the franchise and Halloween Ends fits into the chaos beautifully.

Curtis' return to the franchise gave it a legitimacy that the films were missing in those sequels she wasn't a part of.   Matichak is ok and she and Campbell have unusual chemistry.  Curtis and Matichak however, don't interact as a family so I never felt truly connected.  Campbell's character has layers and he lets all of them come through at various points throughout the movie.

If Halloween Ends was a stand-alone horror film, It would be decent but as part of one the most well-known horror franchises ever, it is sorely lacking.  First, It doesn't feel like a Halloween movie.  The main antagonist (Myers) doesn't get very much screen time so it is difficult to consider the film part of the global franchise...I would call it more "Halloween adjacent".

Curtis is the brightest star here and she does her character proud.  Now in her sixties, she can still portray Laurie as a kick-ass heroine while baking a pie for her granddaughter and offers audiences a fitting ending.

I can only caution moviegoers to keep their expectations low while walking into the theaters to see Halloween Ends.  Otherwise, they will be sorely disappointed.