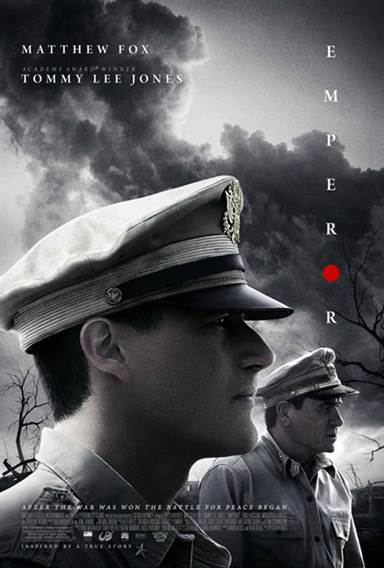 Purchase  DVD/Blu-ray/4K UHD
Opening this weekend Emperor brings a film based on a true event that brought closure to the war in the Pacific during WWII.  Questionable writing, direction and acting, the historical drama threads a romantic tale inside this biopic that tends to distract rather than add to the historical meetings between General McArthur and the Emperor of Japan.  Not at all what I expected, the movie misses its mark in the essence of the plot putting a damper on the real importance of the event.

In the nearly destroyed Tokyo just after the surrender of Japan, the next step is retribution on the leaders of the country that attacked the United States bringing them into World War II.  Emperor Hirohito's (Takatarô Kataoka) considered a war criminal so the USA plan centers on getting the information that will convict him of wrong doing and have him suffer consequences. Since the Emperor's people are ardent followers and a mass retaliation to his conviction would cause more bloodshed, McArthur (Tommy Lee Jones) must get to the bottom of his involvement so he can make a case. General Bonner Fellers (Matthew Fox) gets the assignment to investigate the Emperor because of his knowledge of the country and knowing the language.

Intertwined within the movie we find Fellers flashing back to a time when he was in college and meets Aya (Eriko Hatsune) a Japanese woman.  The two have a romantic relationship and Aya leaves suddenly to go back to her Japanese homeland. A few years pass and he arrives in Japan on a fact finding mission just one year before war breaks out. When things take a negative turn after a visit with Aya, Fellers leaves Japan for his Unit and so starts a hidden conflict between his assignment and the girl with whom he has been obsessed.

Director Peter Webber rambles making his slow moving film go off course and creating two films in one.  The actual historical reason the military is in Japan constantly battles between the charges against the Emperor and a love story, neither looking vital enough to make the film realistic.  His attention to the real urgency of getting the dope on Hirohito becomes insignificant as proven by the lack of screen time of McArthur, his haphazard approach to the assignment, his demand for the face to face meeting in the hands of one man, and his anger that he must meet a deadline set by General Eisenhower.  This entire historical candor takes only 15-20 minutes of the nearly two hour film. The rest of the movie labors on whether Fellers will find his true love, his conflicting feelings for Japan and becoming the protagonist in spite of the outcome.

The film has been rated PG-13 by the MPAA for violent content, brief strong language and smoking.  There is also some actual archival footage of the dropping of the Atomic Bomb on both Hiroshima and Nagasaki as a prelude to the movie.  However, Tokyo which is the setting for the film was never touched by ‘The Bomb' yet we do see the destruction of the air raids on the city that left it in ruins.

Download Emperor in Digital HD/4K from the iTunes store.

For more information about Emperor visit the FlickDirect Movie Database.