Black Lightning stars Cress Williams as Jefferson Pierce, a man wrestling with a secret. As the father of two daughters and principal of a charter high school that also serves as a safe haven for young people in a neighborhood overrun by gang violence, he is a hero to his community. Nine years ago, Pierce was a hero of a different sort. Gifted with the superhuman power to harness and control electricity, he used those powers to keep his hometown streets safe as the masked vigilante Black Lightning. Almost a decade later, Pierce’s crime-fighting days are long behind him…or so he thought. But with crime and corruption spreading like wildfire, and those he cares about in the crosshairs of the menacing local gang The One Hundred, Black Lightning returns — to save not only his family, but also the soul of his community.

Download Black Lightning in Digital HD/4K from the iTunes store. 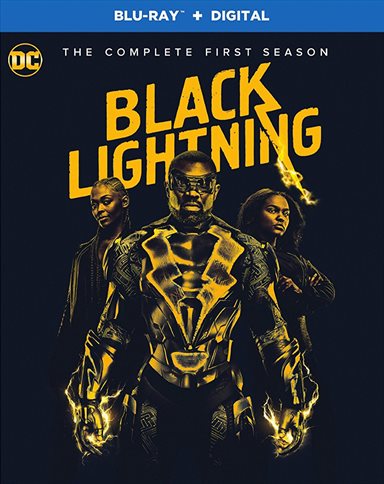 You just can't keep a good Superhero "verse" down. In 2018 The CW expanded their "DCverse" with Black Lightning - the story of Jefferson Pierce, a high school principal, and father of two who has a very big secret. It just completed its first season run on the CW on April 17, and now Warner Bros. has released a 2-disc Blu-ray set for fans to bring home.

Pierce (Cress Williams; Hart of Dixie) is a high school principal and father of two daughters. While this sounds like a "normal" life, Pierce is hiding something about himself. While he is known as a standup guy in his community, what isn't known is that he possesses a superhuman gift of controlling and harnessing electricity. Pierce, who once used to use these powers for good and served as a vigilante, finds himself back in the position of having to do so once again. His community is being taken over by gang violence and he realizes it's up to him to help save not only his community but his family.

Black Lightning Season 1 is presented in 1080p AVC with a very light cheery palette. Skin tones are natural, details are very sharp, and the colors are true. Warner Bros. Home Entertainment has truly done a great job with video transfer this time around. Complementing the video is a 5.1 DTS-HD MA soundtrack. The dialog is crisp and clear while the special effects truly pop on this mix.

Warner Bros. Home Entertainment truly took their time with this release. This 2-disc set is quite impressive and is filled with quite a few extras. It includes:

Black Lightning is a wonderful addition to the DC family on The CW. The show has everything one could want from a good story and action/suspense to great family dynamics which are all wrapped up in a slick presentation that one would be mistaken to pass up. Black Lightning Season 2 has already been greenlit and it will be interesting to see how they can "one-up" this season.