Home / Movie Database / We, the Marines 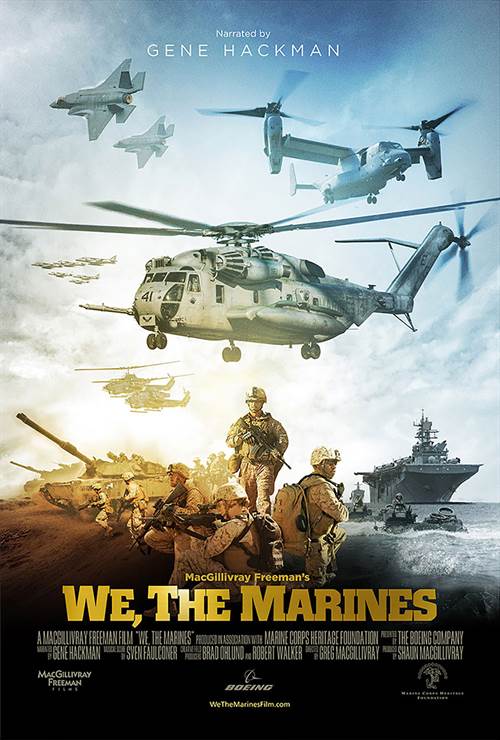 We, The Marines takes viewers on an action-packed adventure into the unparalleled experience of becoming and serving as a member of the U.S. Marine Corps. Narrated by former Marine and Academy Award-winning actor, Gene Hackman, the film honors more than dedication and service; the film offers an unforgettable glimpse into the first-hand experiences of America's always faithful United States Marine Corps and what it takes to become the men and women who honor and defend our country.

Purchase DVD/Blu-ray/4K UHD physical copy of We, the Marines today at Amazon.com

We, the Marines images are © Shout! Factory. All Rights Reserved. 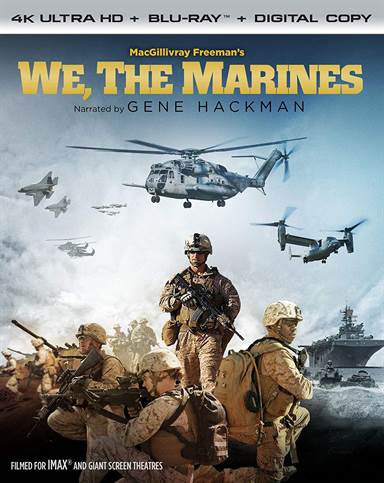 Semper Fidelis – Always Loyal… That is the motto of the United States Marine Corps.  Unless you have served as a Marine, you cannot really understand what that means.  Up until now, our perception of what being a marine is like is what we have seen in the media.  Movies like Full Metal Jacket and Born on The 4th of July offered a glimpse of the hardcore training these individuals endure in order to defend our freedoms.  However, they dramatize the real-life situations that occur and are not always completely accurate.  Thanks to filmmaker Greg MacGillivray (Dolphins) and Netflix we can see what it is like to enter the Marine Corps' basic training as well as some of the advanced training the soldier's attempt.

Narrated by actor and former Marine Gene Hackman (Unforgiven) the documentary begins with a brief history of the Corps dating back to 1775.  Recruited as sharpshooters to fight the British at sea this branch of the military has evolved and changed over the past 200 years. It then moves on to basic training as we see recruits arrive at Quantico in Virginia at nighttime.  This is where their transformation begins with a "buzz" cut and one last phone call home.

The next transition is the pin and handshake the recruits get when they have earned their place in the Corps after their training is concluded.  The ceremony is poignant and somber as we witness hardened soldiers with tears streaming down their faces knowing they have endured and fulfilled a dream.  However, the hard work has only begun as the film switches to various other camps – Miramar, Yuma, Twentynine Palms, etc. – and goes through rough terrain, chemical warfare, underwater helicopter rescue training – to mention a few. These exercises make basic training look like a walk in the park.

If you think this documentary is merely a recruitment tool then you would be mistaken.  There is a sense of pride and family that is evident as you watch the film.  The brave individuals are part of an elite team, which they evidently know, and they want you, the viewer, to know it as well.  MacGillivray does not sugar coat or overdo the seriousness of the Corps so those who are thinking of joining once they see this movie will have an idea of what to expect but, again, it definitely is not simply a recruitment tool.

While I understand why Hackman was used as the narrator – having been a Marine himself he can impress upon the viewer the emotion and honor associated with it – he would not necessarily have been my first choice.  He is a well-respected and revered actor but his vocal cadence doesn't lend itself to lulling the audience into a level of comfort one might associate with a narrator. There is a hoarseness to him that is great for playing a Wild West villain.   However, his presence in the movie does give it a legitimacy it may not otherwise have with a different narrator who had never walked in these soldiers' shoes though.

The Native 4K and 1.78:1 resolution give We, The Marines an excellent video quality worthy of such a heavy subject matter.  From dense forest terrain to winter mountains to sandy deserts, the picturesque scenes are stunning and clean with varying shades of hues that give a terrific visual.  The Dolby Atmos Audio is spectacular as every sound is crystal clear and has a depth not found in some feature films let alone documentaries.  Even the lone extra is in High definition, which is a nice addition.  The extra is We, The Marines Addendum that includes bonus footage and behind the scenes interviews.  It is definitely worth your time to watch it.

The only thing I wish is that this documentary had been longer.  It was an interesting look at this branch of the military and as I watched it I tried to imagine my friend who is a former Marine going through the training exercises shown.

This film made me feel a little of the pride these soldiers experience upon joining the Corps and offered a different perspective of what it means to be a Marine.