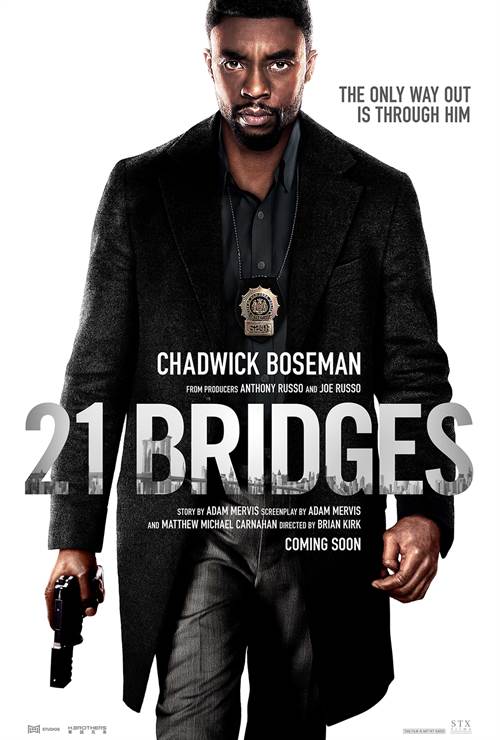 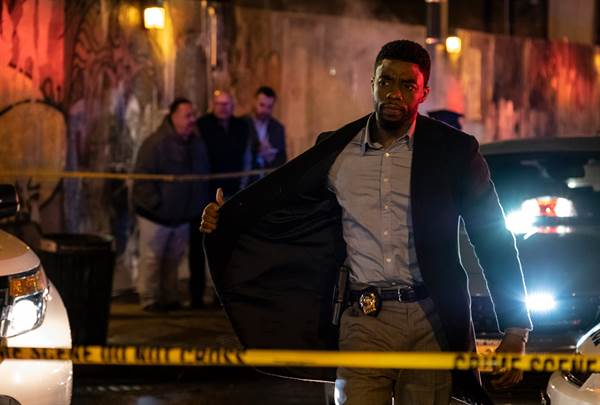 21 BRIDGES follows an embattled NYPD detective (Chadwick Boseman), who is thrust into a citywide manhunt for a pair of cop killers after uncovering a massive and unexpected conspiracy. As the night unfolds, lines become blurred on who he is pursuing, and who is in pursuit of him. When the search intensifies, extreme measures are taken to prevent the killers from escaping Manhattan as the authorities close all 21 BRIDGES to prevent any entry or exit from the iconic island.

Stream 21 Bridges in Digital HD/4K from the AppleTV store.

Listen to the 21 Bridges soundtrack on Apple Music.


Win Passes To An Advanced Screening of 21 Bridges in Florida  11/14/2019 11:11 PM EST
Chadwick Boseman is probably most recognizable for portraying the Black Panther but in his new film 21 BRIDGES, he plays a New York City Police Officer out to find two cop killers.  The movie is set to open on November 22, 2019, but before it is released nationwide, STXfilms, in conjunction with FlickDirect, want to give some lucky winners the chance to win advance screening electronic passes for ...  More>> 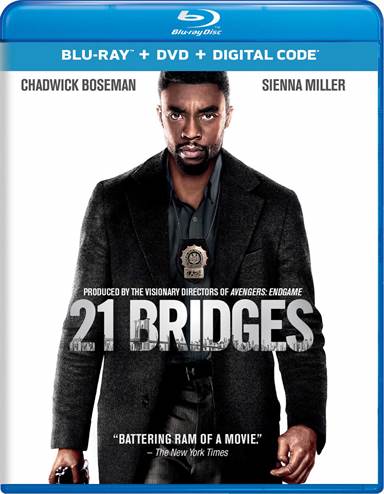 Director Brian Kirk (Game of Thrones) is known for television so he made an interesting choice with his feature film directorial debut and the outcome eludes to his past experiences.  In 2019, he brought 21 Bridges, a police "procedural" starring Chadwick Boseman (Black Panther) to theaters.  The intense drama chronicles a police detective as he pursues two suspects in a cocaine robbery that goes bad.  The criminals end up killing several police officers setting off a manhunt that shuts down every bridge, tunnel, and waterway for only four hours making Andre Davis' (Boseman) job even more difficult.  Audiences can relive all the drama this week as 21 Bridges heads to stores on Blu-ray and DVD.

Davis was the son of a police officer who died when Davis was thirteen years old.  His dad always taught him to be honest, forthright, and to follow his instincts.  This made Davis an excellent, if unpopular, police detective.  When he arrives on the scene of the robbery, there are seven dead police officers and a civilian and most of 500 kilos of cocaine left.  The 85th precinct Captain, McKenna (J.K. Simmons; Whiplash) teams Davis with narcotics officer Frankie Burns (Sienna Miller, American Sniper) to find the suspects.  Unfortunately, the FBI shows up and wants to take over but since the criminals haven't yet left Manhattan, the police department still has jurisdiction.  Hence, the restrictive four-hour lockdown.

Davis and Burns immediately get a hit from a red light camera and find out who their suspects are – Ray (Taylor Kitsch; Battleship) and Michael (Stephan James; If Beale Street Could Talk).  They follow the leads to where the perps would trade the cocaine for cash and then "clean" the cash only to find Ray and an accomplice dead and Michael still on the run.  As Davis catches up to Michael, he finds out there is more to this story and Michael believes he and Ray were set up and he has the thumb drives to prove it.  Burns arrives, and believing Michael is trying to shoot Davis, she kills Michael but not before he gives Davis the evidence.  What Davis finds on the thumb drives could send a lot of people to prison proving that Ray and Michael were set up.

Boseman is stoic as Detective Davis who believes in truth and justice at all costs.  Miller is ok but the two don't have a lot of chemistry.  Kitsch is decent as the badass robber who kills several officers but James is the one who truly matches Boseman in their scenes together.  Simmons is great as always but he typically plays similar characters so one would expect him to be as good as ever.

The 1080p resolution is very good but since most of the movie takes place at night the hues need to be deep and true to perceive any depth, which they are for the most part.  The DTS-HD Master audio 5.1 has a nice balance between effects and dialogue.  The extras are rather disappointing though as only audio commentary with director Brian Kirk and deleted scenes are included.

Boseman is the bright spot in an otherwise generic, predictable movie. It is easy to discern early on that there is something more going on that simply a robbery has gone wrong and the film's ending does nothing to dispel one's assumptions.  At a little over an hour of a half long, the film could be a made for television movie (or broadened into a weekly series – hence Kirk's directing).

21 Bridges is not unique nor prizeworthy but Boseman gives it his best effort and it is somewhat entertaining.