Home / Movie Database / The Sun is Also A Star 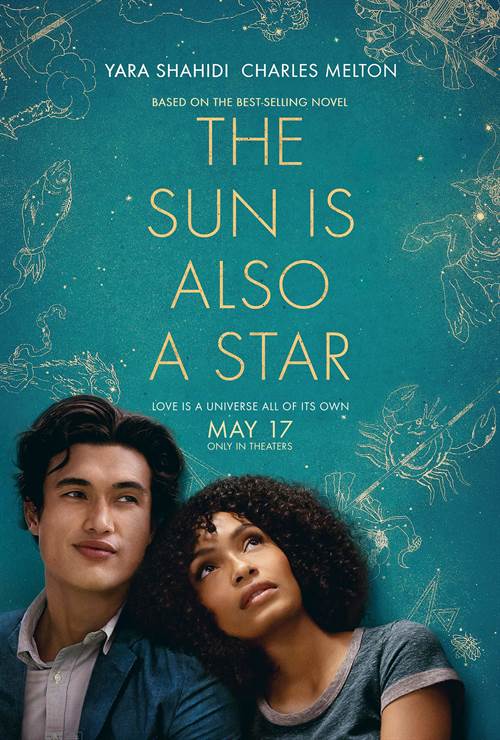 “What if I told you I could get you to fall in love with me…?”

College-bound romantic Daniel Bae and Jamaica-born pragmatist Natasha Kingsley meet—and fall for each other—over one magical day amidst the fervor and flurry of New York City. Sparks immediately fly between these two strangers, who might never have met had fate not given them a little push. But will fate be enough to take these teens from star-crossed to lucky in love? With just hours left on the clock in what looks to be her last day in the U.S., Natasha is fighting against her family’s deportation as fiercely as she’s fighting her budding feelings for Daniel, who is working just as hard to convince her they are destined to be together.

A modern-day story about finding love against all odds, “The Sun Is Also a Star” explores whether our lives are determined by fate or the random events of the universe.

The film stars Yara Shahidi (“grown-ish”) as Natasha and Charles Melton (“Riverdale”) as Daniel, along with John Leguizamo (“John Wick: Chapter 2”). Directed by Ry Russo-Young (“Before I Fall”), the film is based on the acclaimed bestseller by Everything, Everything author Nicola Yoon. The Sun Is Also a Star was #1 on the New York Times bestseller list and has received multiple accolades, including: 2016 National Book Award Finalist; Amazon’s Best Book of 2016 in YA; Amazon’s Top 20 Children’s Books of 2016 in YA; the New York Times Notable Children’s Books of 2016; and Entertainment Weekly’s 10 Best Books of 2016.

Russo-Young directed from a screenplay by Tracy Oliver (“Girls Trip”). The film’s producers are Leslie Morgenstein and Elysa Koplovitz Dutton, who served as producers on “Everything, Everything.” Pamela Hirsch served as executive producer. The behind-the-scenes creative team includes director of photography Autumn Durald Arkapaw (“Teen Spirit”), production designer Wynn Thomas (“Hidden Figures”), editor Joe Landauer (“Before I Fall”), and costume designer Deirdra Elizabeth Govan (“Sorry to Bother You”). The music is by Herdís Stefánsdóttir (“The Hate U Give”).

Download The Sun is Also A Star in Digital HD/4K from the iTunes store.

The Sun is Also A Star images are © Warner Bros.. All Rights Reserved.

The Sun is Also A Star Theatrical Review 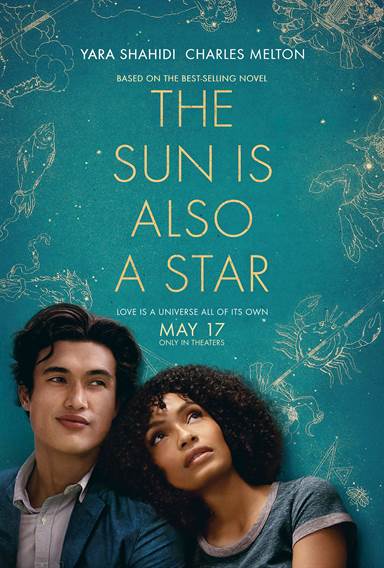 Do you believe in destiny or fate or love at first sight?  Many romantics say they do but how many really feel that spark just from one glance?  Are you more of a realistic, practical, scientific person who needs proof before you can accept things as fact?  What if two people at opposite ends of the "love" spectrum meet?  One believes they were meant to be together after thirty seconds of knowing each other while the other person thinks the romantic one is out of their mind.  Author Nicola Yoon (Everything, Everything) explores this complex relationship in her new young adult novel turned feature film, The Sun Is Also A Star.

Natasha (Yara Shahidi; Black-ish) is a Junior in high school whose world is about to be turned upside down.  Her family has lived in the United States for the last nine years and now, due to an unfortunate set of circumstances, are being deported back to Jamaica.  New York City is her home and she has thrived academically and socially in her adopted country but now all that stands to be shattered in less than 24 hours.  Desperate she heads to the immigration office to see what can be done.  While there is another the caseworker can do for her, he does give her the name of a lawyer who may be able to help.

It is on her way to meet him that Natasha's life is saved by Daniel (Charles Melton; Riverdale), also a high school student on his way to an alumni interview for Dartmouth…the school his Korean parents want him to attend to fulfill their dream of him becoming a lawyer.  Daniel tells Natasha he can get her to fall in love with him in a day.  Of course, the science-minded person doesn't believe him so he sets out to prove her wrong.

Shahidi is not only physically striking but she is emotionally adept at taking on this challenging role.  We see her transform over the course of the film from a pragmatic, skeptical young woman into an emotional wreck who is fearful of the unknown that lies ahead while facing a newfound optimism over having met Daniel.  Melton is ok as the hopeless romantic who is equally "lost" as he wages an internal war over what he wants to do in life with what his parents expect from him.  John Leguizamo (Moulin Rouge!) has a decent, yet uncredited, cameo as Natasha's immigration lawyer.

The film has heart and a sweet message but the delivery is lacking.  I consider myself to be a hopeless romantic and enjoy a fair number of romantic comedies but even I had a hard time believing that Natasha and Daniel fell in love in a four hour timespan…nobody is THAT good.  However, I did like the few plot twists that peppered the last twenty minutes of the movie.  It made this wholly unbelievable storyline seem a little more realistic and grounded in reality.

The visuals, however, tell a different story. Director Ry Russo-Young (Before I Fall) used diverse and interesting camera angles to showcase New York in a unique and stunning way.  This technique offers the film a subplot that is a love letter to New York City and would make anyone who has never visit the great city the desire to do so immediately.

The other subplot is the political climate we currently live in that has law enforcement hunting illegal immigrants, treating them like hardened criminals and departing them needlessly.  Natasha and her family give a face to a segment of the population that many Americans really know nothing about other than the fact that they are in America illegally.  This film, however, shows a hard-working, intelligent, young woman whom you would never know is here with her family against the law.

Yoon has a flair for the romantic and especially appealing to younger audiences and The Sun is also a Star offers another example of her storytelling appeal.  I just wish the story would have been more believable and executed with more finesse.