Home / Movie Database / Up in the Air 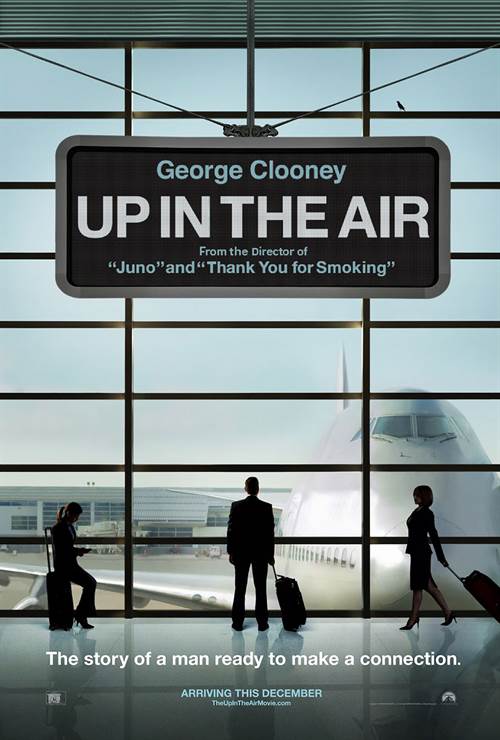 Up in the Air Synopsis 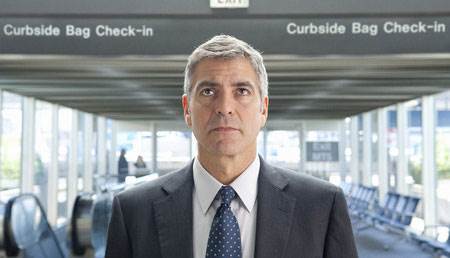 Ryan Bingham (George Clooney) racks up miles flying around the country firing employees on behalf of companies. But he faces losing the job he savors to recent college grad Natalie Keener (Anna Kendrick) -- and losing the ability to escape emotional ties to anything. A connection he builds with Alex Goran (Vera Farmiga), however, might change his outlook on the future. Golden Globe winner Jason Reitman's smart comedy also stars Jason Bateman.

Purchase DVD/Blu-ray/4K UHD physical copy of Up in the Air today at Amazon.com

Stream Up in the Air in Digital HD/4K from the AppleTV store.

Up in the Air images are © Paramount Pictures. All Rights Reserved.


Jason Reitman Directs Up In The Air  2/24/2010 8:58 PM EST
When Jason Reitman was writing the screenplay for Up In The Air he would live life the same as his main character, played by George Clooney, a man who is constantly on the move, passing through one of America's airports almost every single day of the year. Reitman would check into an anonymous airport hotel, fire up his laptop and pound away at the keyboard, safe in the knowledge that distractions...  More>>

Up in the Air Theatrical Review 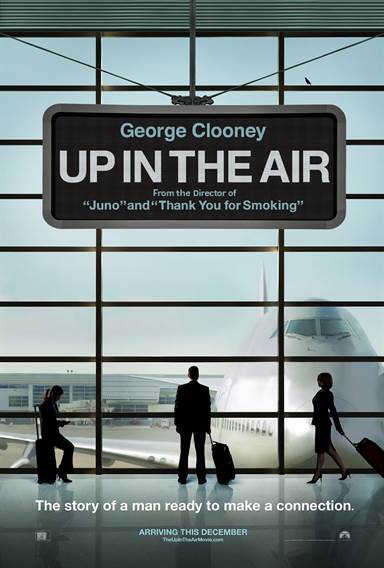 I feel like I know George Clooney because he always plays the same guy.  Okay, maybe that is not literally true -- see Burn after Reading -- but, just being realistic.   He plays the serious corporate bad-ass.  He is slick talking, sarcastic, and looks good in a suit.  You are drawn to his charisma only to be dashed on the rocky shoals of his sarcastic wit.  He is like a siren that way.  He is over-intellectual -- at the very least, he is smarter than you.  Hey, he could figure Syriana out, which makes him smarter than me.

In Up in the Air, Clooney plays a sharp-dressed corporate bad-ass who flies around the world and fires people because their real bosses are too chicken to do it.  He gives the soon-to-be laid-off a stare of his soulful eyes and sends them on their way with nary a workplace shooting or a cleaned out supply cabinet.  He lives in high-priced hotels and travels with airports.  His life's goal is to rack up 10-million American Airlines Sky miles, so he will get an award that only a handful of others have gotten -- including his name on a plane.

He speaks at self-help conventions and tells people to divest their lives of, everythingand everyone.  He is happier that way -- with no attachments.  When his kid sister is getting married, and he is asked by his older sister to attend, he makes it plain that love is for suckers.  But then he meets Alex, a middle aged attractive woman, with the same schedule he has -- another person who lives on airplanes, and wants virtually anonymous sexual hookups.  Could this be the basis for love?  It could possibly be.

He is also mentoring a young, would- be- firing Jedi, who wishes to replace his beloved air-travel with electronic video-firing, something Clooney hates; because it would mean he would have to come home to his miserable bloodless apartment. So he has her under his wing, as he flies around laying off people.  However, she can help him, because he has been asked to take pictures of a cardboard image of his younger sister and her boyfriend in various worlds locations...like 'the gnome'.

If that sounds like a lot of plot threads to weave together, don't worry; the movie doesn't really try.  It got six Oscar nominations, but didn't win any.  Having seen it, I am not surprised, and here is why.  Clooney is good, and he is in his sweet spot here.  He looks good in a suit, which I believe was the point of the Oceans movies. Unfortunately, that is the best part of it; after George and his super-corporate persona – it is all downhill.

Before I get to spoiler-specifics, I want to laud how Up in the Air captures the reality of hard-core corporate air travel.  In 2006, I spent weeks doing constant travel across the US and getting a little taste of what Clooney got; I have to say it is on target -- anonymous, cavernous airports, lonely nights in plush hotels, the ritual of everyone turning on their blackberry when the plane lands.  The ritual of going through security in a choreographed 'dance' (shoes off, laptop out, move with practiced efficiency to get all the metal off your body, hold the ticket up..., and so on).

The people who face the camera and respond to the layoffs were real people who thought they were part of a documentary.  Their responses are honest, real and touching.

All of this is good; and the direction, the acting, and the casting – it is all nice.  It is not as nice as Clooney in a suit playing a corporate bad-ass -- but it is nice.  It is watchable.  That isn't where Up in the Air falls down, though.

Spoilers
the problem is that the movie is all build up, and then it has to take a stand.  The story lines do not weave 'together' so much as thematically reinforce each other. Clooney tells his young protégé that love is an empty promise and asks her to "sell him on love".  When she can't, that is one score for the Clooney side of the equation.  When he falls in love with Alex, who is "just like him but with a vagina", the viewer is led to see the obvious -- these people are perfect for each other.

When Clooney has to give a speech late in the film about his no-attachments, no other people philosophy, we wait to see if he will make a decision -- if his character arc will change him one way or the other, and it is here where the movie runs out of genius.

If he doesn't change, if he sticks to his guns, then there is no character arc and therefore, no Oscar.  On the other hand, if he decides to take a chance on love and it pans out, then it's a sappy Hollywood ending -- love conquers.  Could anything be more banal?  Again, no Oscar.  So what is left?  He can take a chance on love, and you can probably figure it out.  If this is a spoiler then the structure of the move is more opaque to you than it should be.

Unfortunately, this puts Up in the Air in the position of "inadvertently" proving cynical-Clooney right.  It is as if the character arc happens, and the world shifts back to show that, a-ha, he was better off as a man with no attachments in the first place and love probably is for suckers.  While this is not a "Hollywood" story, and hence, the almost-Oscars; it is certainly not the case that we, as a people, are hurting for more cynical messages out there.  We do not wake up in the morning and say, "you know, folks, we are not cynical enough".  Furthermore, the perfect predictability of the script makes the reveal feel less like a surprise and more like the end of a morality play or cautionary tale.  It is a script that feels scripted and this isn't it Sort of Up In the Air.
/Spoilers

In the end, Up in the Air, is another (decent) Clooney-in-a-suit flick.  It isn't a funny movie for the most part, although there are a few funny moments.  It does burn its insight on getting air-travel and people's responses to being fired, more or less right, although I am amazed that anyone could think for a moment that you could fire someone over a video-conference.  How long would you expect your video conference gear to survive?  It dumps its insightful, realistic feeling the moment it actually engages the hearts of the main characters, because it needs to be heavy and forceful and can't be just another story.

I think I would have enjoyed it more if it was just another story.