1987. When music fanatic Javed discovers the illustrious back catalogue of The Boss his world is turned upside down; already a creative soul his passion for music and writing is set alight by the songs of the working-class poet, whose lyrics feel all too familiar to the aspirational teenager. Yearning to escape his rundown hometown and the rules of his traditional Pakistani household, Javed finds himself caught in between two worlds and must discover if he too is Born to Run...

Purchase DVD/Blu-ray/4K UHD physical copy of Blinded by the Light today at Amazon.com

Download Blinded by the Light in Digital HD/4K from the iTunes store.

Listen to the Blinded by the Light soundtrack on Apple Music.

Blinded by the Light images are © New Line Cinema. All Rights Reserved.

Blinded by the Light Blu-ray Review 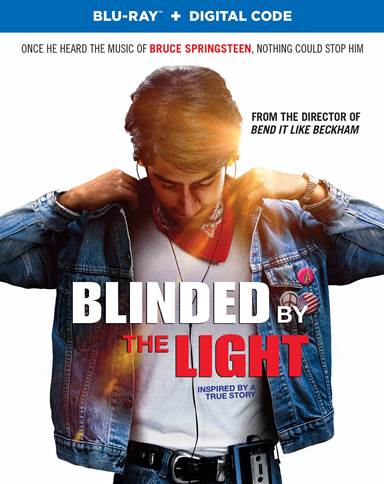 I read a quote somewhere…"Music is heard with the ears, understood with the heart" and I thought how true that statement was.  There are so many styles of music worldwide but we don't always need to understand the language the song is sung in to sense that the lyrics are speaking to us personally. From Country to Rap to Heavy Metal, each of us takes away something different from what we are hearing.

All at the same time we are part of something universal yet intimately personal.  For British journalist, Safraz Manzoor that musical journey began the first time he heard a song by Bruce Springsteen and this year his memoir, Greetings from Bury Park: Race, Religion and Rock N' Roll, was adapted for theaters in the movie, Blinded by the Light.  This month the film hits stores on Blu-ray and Digital HD.

Javeed (Viveik; Kalra; Next of Kin) is a Pakistani teenager living with his family in England after Javeed's father, Malik (Kulvinder Ghir; Bend It Like Beckham), fled his homeland before Javeed was born.  Being a dutiful son, Javeed doesn't question his father even though he wants to go to Manchester University to become a writer – a profession Javeed's father would never allow.  The year is 1987 and racial tensions are high forcing Javeed and his family to keep a low profile.

One day the only other Asian student in Javeed's school, Roops (Aaron Phagura; Him) gives Javeed two cassette tapes of Bruce Springsteen's songs and one night when Javeed has given up all hope and throws his writing in the trash, he listens to the tapes.  Suddenly, Javeed's whole world changes.  He has a new lease on life.  The "Boss" energizes Javeed to stand up to his haters and disobey his father; becoming his own man. Of course, this leads to friction with his family and his girlfriend until a lightbulb goes off and Javeed realizes it isn't all about him.

Kalra is terrific in his role as the introverted, misunderstood son who "blossoms" under his newfound voice in the form of Springsteen's lyrics.  Javeed's girlfriend, Eliza, is portrayed by Nell Williams (Game of Thrones).  She brings energy to the movie as an intelligent, politically active teenager.  Phagura and Kalra have great chemistry which makes their friendship and mutual love of all things Springsteen believable.  Ghir plays the typical Asian parent very well, which makes audiences understand why his son would rebel against Malik's beliefs and authority.

The 1080p video quality offers some excellent picture clarity and rich colors with minimal muddiness.  The Dolby Atmos showcases the eclectic ‘80's music soundtrack beautifully.  The dialogue sits comfortably in the center speakers while the songs can be heard all around, enveloping the viewer in the emotional tone of Springsteen's songs.  The minimal extras are a little disappointing as it would have been nice to get even more insight into Manzoor and the filming of the movie.

The extras include: Memoir to Movie, The Most Crazy Thing and Deleted Scenes. Director Gurinder Chadha (Bend It Like Beckham) gives a unique perspective on one young man's journey to find his inner strength and creativity.  She uses Springsteen's lyrics as their own characters to movie the story along and set a certain mood that permeates Blinded by the Light.

Even if you aren't a Springsteen fan, you will appreciate the journey Javeed takes on his search for enlightenment and freedom, how Springsteen's songs fuel Javeed's dreams and how Chadha interprets those songs, literally plastering specific key phrases across the screen at optimal times.

This is a well-done feel-good film and will have even the least interested humming Born to Run by the end.