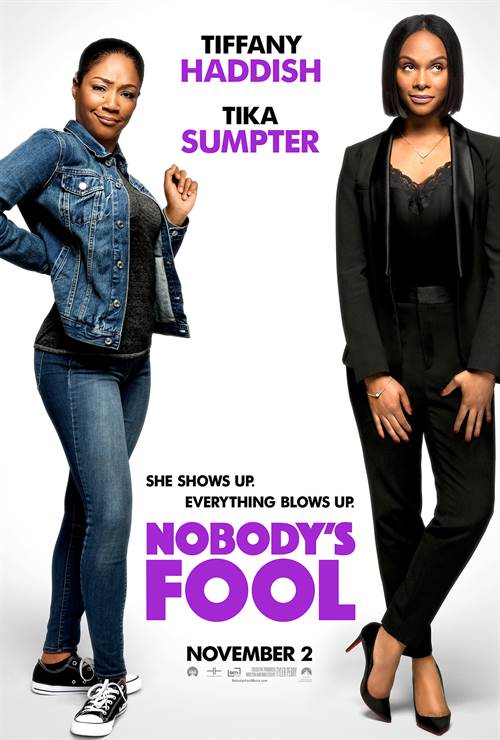 Trying to get back on her feet, wild child Tanya (Tiffany Haddish) looks to her buttoned-up, by the book sister Danica (Tika Sumpter) to help her get back on track. As these polar opposites collide — with hilarious and sometimes disastrous results — Tanya discovers that Danica’s picture-perfect life — including her mysterious boyfriend — may not be what it seems.

Stream Nobody's Fool in Digital HD/4K from the AppleTV store. 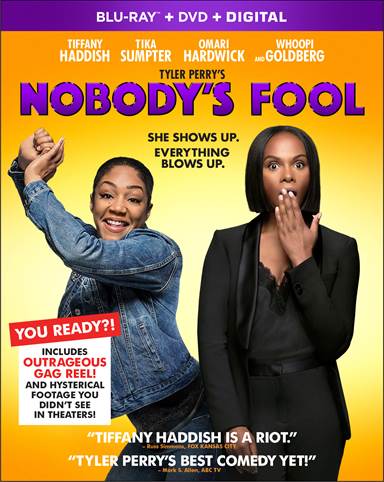 Tyler Perry's Nobody's Fool premiered in theaters back in November, and, now, you will be able to either relive the film or experience it for the first time on Blu-ray, DVD and Digital HD on February 12, 2019.

Nobody's Fool follows the story of Danica (Tika Sumpter; Southside with You), an ad executive who seems to have it all - a great, well-paying job, a nice Manhattan apartment, and a boyfriend (whom she's never met as he lives on an oil rig). However, reality comes crashing into her life around the time that her sister Tanya (Tiffany Haddish; Night School) gets out of jail.

After coming to live with Danica, Tanya decides that her sister is being "catfished" by her boyfriend, Charlie (Mehcad Brooks: Supergirl). Her search seems to prove the worst - that "Charlie" doesn't really exist. All of this is happening after Danica lands a perfume ad for a large company. After the news of Charlie, Danica is heartbroken and her life spins out of control. She loses the ad campaign, is fighting with Tanya, and rebounds with Tanya's boss, Frank  (Omari Hardwick; Power). Her rebound relationship turns into real love but, down the line, Danica winds up breaking Frank's heart and has a falling out with Tanya.

Tyler Perry can certainly write an entertaining and funny script, but there's definitely a lot going on here in this storyline. This makes it hard to focus on the film and truly enjoy it. That being said, Haddish is funny as always and she really shines in this film as a younger version of Madea (According to Tyler Perry). Sumter was decent as Danica but her performance falls a bit flat, especially in contrast to Haddish. Adding some spice to the film is Whoopi Goldberg (Sister Act), who plays Danica and Tanya's marijuana growing mother.

The film is presented in 1080p AVC with it's original 2.39:1 ratio. Having been shot digitally the film itself appears glossy and has a strong color base. There is also not much grain to be found. Ghosting and artifacts are non-existent.  The audio clarity of this film is amazing. The DTS-HD MA 5.1 Audio envelopes the room with the perfect sync on front-loaded dialog with special effects relegated to the rear.

The Blu-ray comes with the following special features:

Overall, this film wasn't top on my list, however, it definitely provided a fun two hours for me, and watching Tiffany Haddish act on screen is always a huge treat. The cast is solid and it was also nice seeing Whoopi back in a comedic role.  If you are a fan of Tyler Perry and his films this is a must-have. If you are a casual comedic viewer this is a great way to spend an evening with some friends or a loved one.