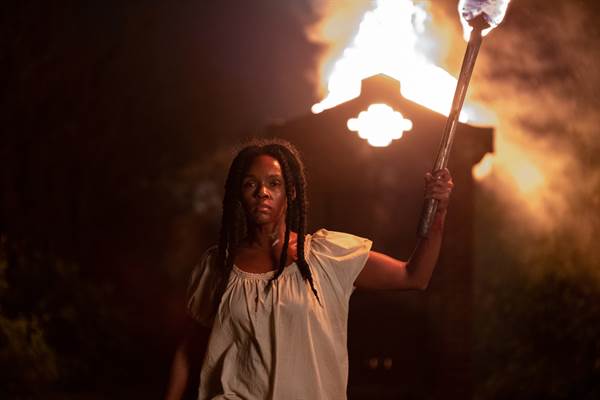 Successful author Veronica Henley (Janelle Monáe) finds herself trapped in a horrifying reality and must uncover the mind-bending mystery before it’s too late.

ANTEBELLUM is a terrifying new thriller from the producer of the acclaimed films GET OUT and US, and groundbreaking directors Gerard Bush and Christoper Renz (Bush+Renz) - an exciting new voice in filmmaking.


Antebellum To Go On-Demand September 18th, 2020  8/6/2020 5:44 PM EST
As the country continues to be on lockdown and movie theaters slowly reopen, Hollywood can't keep pushing back release dates for their upcoming slate of films.  Lionsgate is the latest to announce an opening date for their highly anticipated feature, Antebellum.  The movie, starring Janelle Monae, will debut as Premium on-demand on September 18, 2020.  It will also be released in select internatio...  More>> 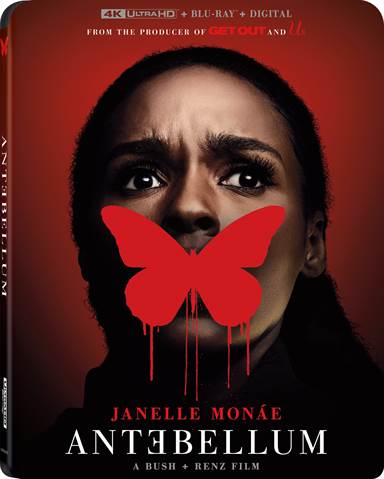 The more things change…the more they stay the same.

There was a time in the United States when African Americans were seen as property instead of human beings.  A time when the northern states and the southern ones disagreed about slave ownership which ultimately led to war.  There are some who still hold these beliefs today, despite this country having had an African American politician holding the highest position in our government for 8 years.  It's difficult to imagine that there are those in America who still hold the archaic belief that the color of someone's skin dictates their worth.

Unfortunately, that is the uphill battle sociologist Veronica Henley (Janelle Monae; Hidden Figures) deals with and fights against every day.  She also seems to be having a recurring dream about a slave named Eden (Monae).  Veronica wakes up to her cell phone ringing and prepares for her flight to Louisiana where she is speaking at a conference as part of her promotional tour for her new book.  However, after having dinner out with her friends, Veronica gets in an Uber alone to go back to the hotel but never arrives and misses her flight home the next morning.

Eden is brought back to the plantation where she is punished and "branded" for trying to escape.  As a group of new slaves are brought to the plantation Eden takes a woman named Julia to her cabin where Julia tells Eden she knows who Eden is and she wants to escape because she is pregnant.  However, after one of the soldiers beats her, Julia miscarries and then commits suicide.  When Eden finds Julia hanging from the rafters, she decides to try and escape again with the help of another slave named Eli.  After Eden is raped by the General (Eric Lange; Narcos), she gets his cellphone from his saddlebag, letting the viewer onto the fact that Eden is Veronica who has been kidnapped and imprisoned at a civil war reenactment park.

Monae has had a wonderful career as a singer/songwriter and is beginning to come into her own as an actress.  She tends to play strong-willed, outspoken black women fighting for their rights and while Veronica is a similar character, Eden shows more of Monae's softer and more vulnerable side.  Lange, Jack Huston (Ben-Hur), and Jena Malone (The Neon Demon) all lend their considerable talent to portraying the evil southern who firmly believe Blacks should be "seen and not heard".  Gabourey Sidibe (Precious) gives a short but memorable performance as one of Veronica's friends attending the conference as well.

The 2160p resolution and 2.39:1 aspect ratio makes Antebellum a visually stunning film with sharp details and an impressive color palette.  The opening sequence is also rather impressive as it is filmed in one long shot using a steady cam.  The Dolby TrueHD 7.1 audio is equally strong with wonderful depth and surround sound.  The combo pack also offers over an hour of extras which are definitely worth viewing.  They include The History in Front of Us: Deconstructing Antebellum, A Hint of Horror: The Clues of Antebellum, Opening Antebellum, Deleted Scenes, and Theatrical Trailers.

Written and directed by Gerard Bush and Christopher Renz (17 Seventeen), Antebellum has a similar aesthetic as Get Out and Us.  It has an essence of mystery while maintaining the outward appearance of some semblance of normalcy.  Like Get Out, I somewhat enjoyed Antebellum until the last few minutes.  I found the concept of kidnapping people to live in the past intriguing even if the execution was a little off-kilter.  Also, the concept of the plantation leaves some glaring plot holes making the viewer question how something like this could potentially happen in real life.