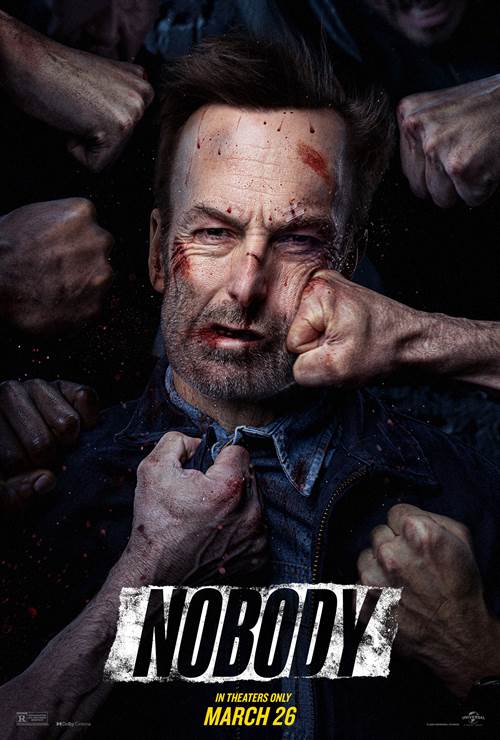 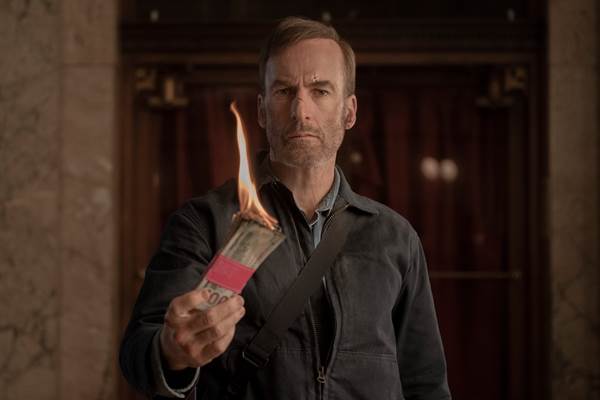 Emmy winner Bob Odenkirk (Better Call Saul, The Post, Nebraska) stars as Hutch Mansell, an underestimated and overlooked dad and husband, taking life’s indignities on the chin and never pushing back. A nobody.
When two thieves break into his suburban home one night, Hutch declines to defend himself or his family, hoping to prevent serious violence. His teenage son, Blake (Gage Munroe, The Shack), is disappointed in him and his wife, Becca (Connie Nielsen, Wonder Woman), seems to pull only further away.

The aftermath of the incident strikes a match to Hutch’s long-simmering rage, triggering dormant instincts and propelling him on a brutal path that will surface dark secrets and lethal skills. In a barrage of fists, gunfire and squealing tires, Hutch must save his family from a dangerous adversary (famed Russian actor Aleksey Serebryakov, Amazon’s McMafia)—and ensure that he will never be underestimated as a nobody again.
Nobody is directed by acclaimed filmmaker Ilya Naishuller (Hardcore Henry), from a script by Derek Kolstad, the narrative architect of the John Wick franchise, and co-stars legendary Emmy winner Christopher Lloyd as Hutch’s father and multi-hyphenate musician-actor RZA as Hutch’s brother, whose own hidden talents aid Hutch in his quest for vengeance.

Purchase DVD/Blu-ray/4K UHD physical copy of Nobody today at Amazon.com

Stream Nobody in Digital HD/4K from the AppleTV store.

Nobody images are © Universal Pictures. All Rights Reserved.


Win A FREE DIGITAL HD Code For The Hit Film, NOBODY  6/7/2021 7:22 PM EST
What if your life became routine and mundane?  Every day is pretty much the same.  Go to work, clock in, clock out, go home, take out the garbage, etc. Nothing is ever exciting and even your own family treats you like you are invisible.  That is Hutch Mansell's life until one event changed everything.  NOBODY is a glimpse of who Hutch is and how it affects everyone around him.  The movie is set to...  More>>

Win a Premium Video-On-Demand Code To Stream NOBODY Beginning Ap...  4/7/2021 4:50 PM EST
What if your life became routine and mundane?  Every day is pretty much the same.  Go to work, clock in, clock out, go home, take out the garbage, etc. Nothing is ever exciting and even your own family treats you like you are invisible.  That is Hutch Mansell's life until one event changed everything.  NOBODY is a glimpse of who Hutch is and how it affects everyone around him.  To celebrate the pr...  More>> 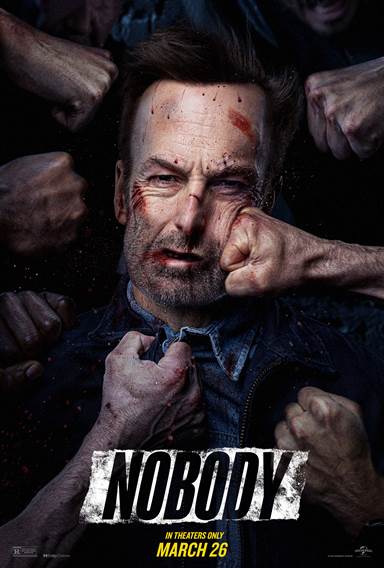 This film is like turning over a rock, you never know what's underneath until it's seen. That's the great joy in this film; only you can probably guess what's coming from the first scene when a battered Bob Odenkirk is sitting in an interrogation room feeding a stray cat. It's a beautifully constructed sequence that leaves the possibilities wide open. He seems the perfect victim, yet the cat and the relaxed attitude seem wildly out of place.

I don't know how you feel about wild beat'em up films like "John Wick", but I appreciate the beauty of the constructed and choreographed violence in the best of them, and this off-the-wall film fits into that genre better than most. This leads me to a line in the film that comes from Christopher Lloyd who calls what's going on around the characters as "A bit excessive…but glorious."
Nobody (no pun intended) would peg Odenkirk as an action star, yet here he is pounding on the bad guys like a suburban Jedi, and as hard as it is to believe, well, seeing is believing. I knew he was a good actor, an award-winning one at that, but this is so unexpected I'm still savoring the treats he delivers in the role.

Hutch Mansell (Odenkirk), an often overlooked and underappreciated suburban dad and husband, is almost never noticed by the world. His kids are disappointed in him, and his alienated wife Becca (Nielsen) is putting up barriers between them in bed. All in all, he seems a typical lost, frustrated, and neurotic product of our times, a man simmering with hidden rage trying hard every day to control his anger.

When a break-in at his house by two inept burglars finds his son Blake (Munroe), jumping in to save them, while Hutch stops himself from preventing the attack, the look of disappointment in his family's eyes are all it takes to finally trigger long-dormant instincts and the hidden truths of his past that set him on a path of destruction that ultimately leads him to a war with the Russian Mob.

Director (and Musician) Ilya Naishulker brilliantly plays this too perfect set-up against form by choosing to use music depicting the exact opposite of the action happening on screen, and it's a delicious mind-bending treat. Odenkirk along with Christopher Lloyd playing his father, are an inspired and unexpected duo who just add more fuel to the fire of twists that shouldn't work, but work perfectly. This film has just the right combination of elements for an entertaining, yet emotionally draining evening at the movies. Bring on the sequel.

My take… Personally, I think this is an instant classic, a film that comes out of nowhere and propels a "Nobody" to "Somebody" stature. If this is your type of film, it's a must-see.

"Nobody" is Rated R for strong violence and bloody images, language throughout, and brief drug use.