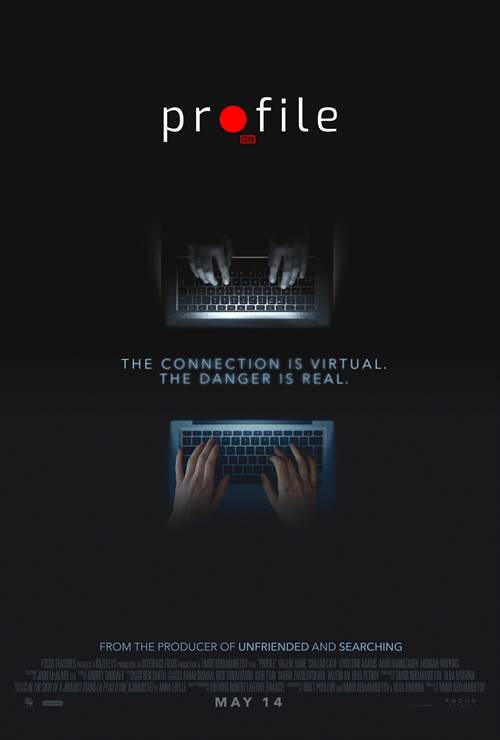 PROFILE follows an undercover British journalist in her quest to bait and expose a terrorist recruiter through social media while trying not to be sucked in by her recruiter and lured into becoming a militant extremist herself. The thriller is co-led by Valene Kane (ROGUE ONE: A STAR WARS STORY) and Shazad Latif (STAR TREK: DISCOVERY). PROFILE is inspired by the 2015 nonfiction bestseller “In The Skin of a Jihadist” by a French journalist who now has round-the-clock police protection and has changed her name to Anna Érelle.

Stream Profile in Digital HD/4K from the AppleTV store. 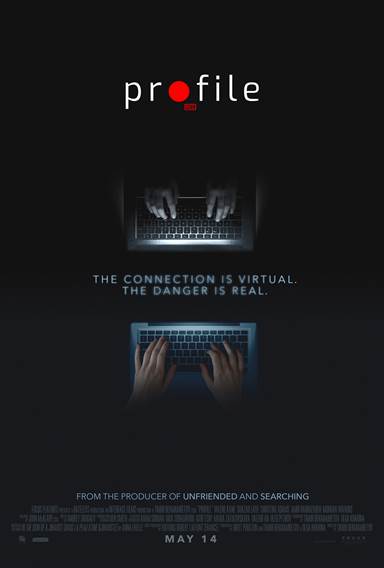 Social Media has opened up a whole new world full of ideas and ideals to individuals of all ages.  It can also be a scary place where despicable individuals lurk to prey on innocent and/or naïve people, many of whom are impressionable young women.  These predators try everything from indecent exposure online to meeting up with these women and then selling them as sex slaves to persuading them to convert to the Islamic religion and go to the Middle East to become brides and soldiers for ISIS.  One journalist tried to expose the latter group and chronicle the tactics these recruiters take.  Based on a true story, Focus Features' latest release, Profile, takes a look at this "underworld" of the internet.

Amy Whittaker (Valene Kane; Rogue One: A Star Wars Story) is a freelance journalist living in London.  After learning of a teenage girl named Taylor (Eloise Thomas; The Cow of Fire) who became enticed by an Islamic recruiter to convert to Islam and travel to Syria, she decided to investigate how these recruiters lure young women in and the process to convince them to travel to the Middle East.  Creating a fake Facebook profile, Amy/Melodie begins liking and sharing ISIS videos until she attracts the attention of Bilel (Shazad Latif; Penny Dreadful).

Timur Bekmambetov (Wanted) directed Profile from a very singular lens.  Most of the film is the view from either Amy's or Bilel's screen as their "relationship" unfolds through social media…Facebook, skype, etc. This allows the audience to feel as if they are a part of the story.  It is both intimate and isolating at the same time.  It also helps to build tension in the film as we sit at the periphery watching their feelings and manipulations grow.

Kane does a great job playing the hard-nosed journalist who pretends to be as quiet and demure as a mouse when speaking with Bilel.  Latif comes across as sincere as Bilel professes his love to Amy.  Together they have a chemistry that transmits through the internet though the two have never met in person.  The rest of the cast: Christine Adams (Black Lightning) as Amy's boss, Amir Rahimzadeh (The Heights) as the stereotypical tech guy helping Amy, Morgan Watkins (Kingsman: The Secret Service) as Amy's boyfriend, and Emma Cater (Wild Horses) as Kathy, Amy's best friend, are well-chosen as they add to Amy's story without taking the focus off Kane and Latif.

The technical aspects of the film are integral to the look and feel of the movie.  While I'm sure some tech wizard can probably find some subtle mistakes, the layperson would be as clueless about technology as Amy seems to be and wouldn't notice. It is rather frustrating though that Amy seems to be clicking all around, switching screens, having multiple conversations via Facebook, Skype, messenger while speaking with Bilel because some of what is going on is distracting and some of it goes by her screen so fast that it is easy to miss.

Watching the movie and knowing it is based on real-life, intrigues me and makes me want to buy the book it is based on, In the Skin of a Jihadist. I am fascinated by the idea of who Anna Erelle really is, what she gave up to "break" this story, how her life has changed, and if she would go back and do it all over again.

I found Profile to be intriguing and engaging but the social media "gimmick" loses steam by the end.  I also wish we could have been witness to Bilel's side of the story to offer a fuller view of what was happening but of course, that would be impossible.

It is scary to see what is out there and how easily young girls with low self-esteem could be seduced into a world they know nothing about.