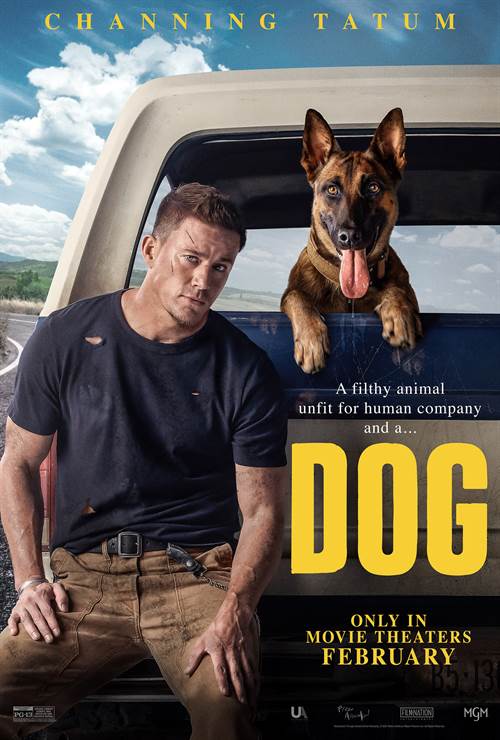 DOG is a buddy comedy that follows the misadventures of two former Army Rangers paired against their will on the road trip of a lifetime. Army Ranger Briggs (Channing Tatum) and Lulu (a Belgian Malinois dog) buckle into a 1984 Ford Bronco and race down the Pacific Coast in hopes of making it to a fellow soldier's funeral on time. Along the way, they’ll drive each other completely crazy, break a small handful of laws, narrowly evade death, and learn to let down their guards in order to have a fighting chance of finding happiness.

Stream Dog in Digital HD/4K from the AppleTV store.


See an Advance Screening of DOG in Florida  2/10/2022 1:35 PM EST
When is Man's best friend not his best friend?  When he is a trained soldier who doesn't seem to like anyone - especially not Army Ranger Briggs (Channing Tatum; Magic Mike).  As one can imagine, When Briggs is tasked with taking Lulu to her handler's funeral, things don't go smoothly but eventually, Briggs and Lulu learn a lot about themselves and each other.  DOG is being released on February 18...  More>> 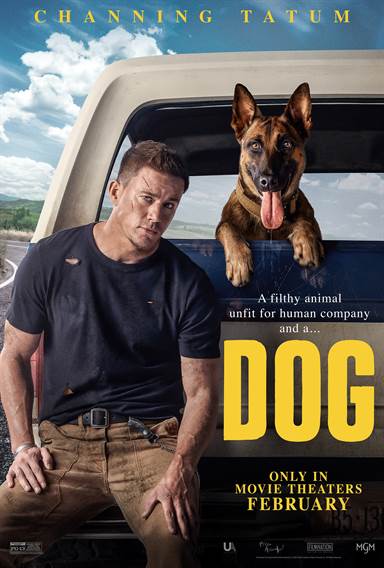 War is hell, or so the saying goes.  Men, women, and animals put their lives on the line so others may live in a democracy. Some make the ultimate sacrifice but even those who return home often suffer long-lasting effects.  Besides the physical pain, some soldiers experience from their injuries, many also suffer from post-traumatic stress disorder which can leave them feeling depressed/suicidal.  And despite what some people may think, PTSD can strike anyone, at any time, regardless of if they have two legs or four.  The new “buddy comedy” out this week, Dog, illustrates this concept perfectly.

Army Ranger Briggs (Channing Tatum, Magic Mike) has been grounded indefinitely because, among other scars, he has a brain injury that causes headaches and seizures.  However, he is desperate to be in the field, so much so, that he had his doctor clear him for service despite his brain trauma.  The only thing stopping him is the approval of his commanding officer who refuses to return Briggs to combat no matter how much he pleads with the commanding officer (CO).

One day the CO calls Briggs up and tells him he will be cleared for combat if Briggs does one thing.  He needs to drive from the northwest to Arizona and bring Ranger Lulu to her handler’s funeral.  Her Handler, Sergeant Rodriguez (Eric Urbiztondo; S.W.A.T.) took his own life because of PTSD.  Briggs and Lulu have a rocky start but eventually, they each come to realize some things about themselves and each other.

Lulu, who is played by three different dogs, is obviously the star of this film but Tatum holds his own in one of the best performances I think I have seen from him to date.  Both dog and man express emotions that most people and animals couldn’t understand but they do it in such a way as to not alienate the audience.  The other actors in the film don’t especially add or detract from the film but the focus is always on Tatum and the dog.  I must give them kudos for being on screen 95% of the time and keeping the audience entertained and the pacing moving along.

Dog is very much a Tatum production with the story having been written by his friend Brett Rodriguez, screenplay by his other friend, Reid Carolin (Magic Mike), and co-directed by Carolin and Tatum.  With two directors in the mix, there is always the fear the film will be choppy and uneven but as collaborators, it is obvious that Tatum and Carolin are on the same page with a common goal.

The goal seems to be a much more realistic view of PTSD and wounded soldiers.  Since I am not a Veteran, I can only assess the movie from a layperson’s point of view, but I walked away from it with a feeling that the filmmakers were trying to pay homage to physically and emotionally wounded soldiers without being cliché.  Of course, the plot is predictable and cliché, but Tatum’s acting coupled with the way in which the story is told, allows Dog to be more than a simple cliché.  I did leave the theater wondering how Vets would view the movie debating if they would feel honored or insulted by the portrayal.

I’m not sure who decided this movie was a buddy comedy but, other than a few lighthearted moments here and there, this is a somber film with a serious message.  It feels important without a heaviness it could have had.  However, the marketing makes the movie seem as if it is lots of laughs, but it really isn’t.  I can’t exactly blame them though, because if it had been marketed as a serious film, it might not do as well at the box office as it probably will opening weekend.