Home / Movie Database / The Bridge on the River Kwai 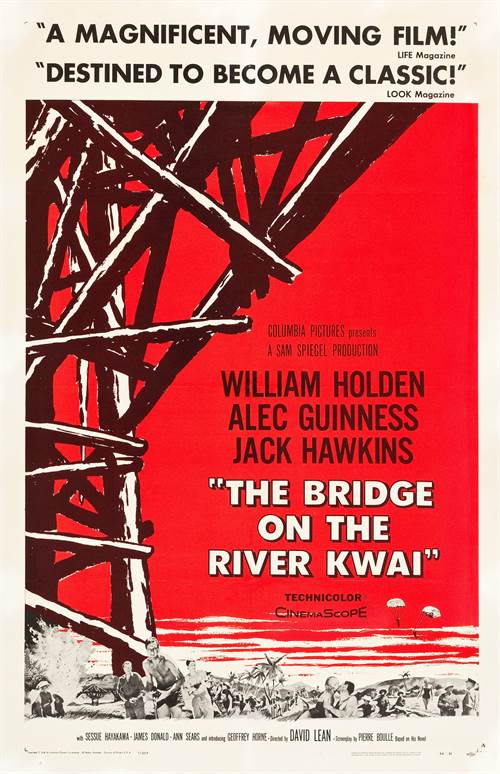 The Bridge on the River Kwai Synopsis

Adaptation of the Pierre Bouelle novel about POWs in Burma forced to build a bridge to aid the war effort of their Japanese captors. British and American officers plot to blow up the structure, but the commander of the bridge's construction has different plans.

Purchase DVD/Blu-ray/4K UHD physical copy of The Bridge on the River Kwai today at Amazon.com

Stream The Bridge on the River Kwai in Digital HD/4K from the AppleTV store.

The Bridge on the River Kwai images are © Columbia Pictures. All Rights Reserved. 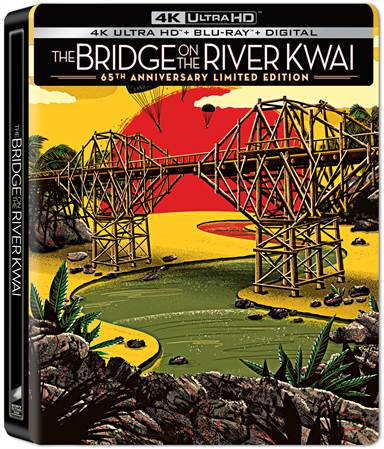 Sixty-five years ago, The Bridge on the River Kwai was nominated for eight Academy Awards, of which it won seven, including Best Picture.  At the time, the dramatic film, based on the novel of the same name by French author Pierre Boulle, was a box office hit. Now, thanks to the latest technologies, It has been enhanced to 4K and released by Sony Pictures.  The limited-edition Steelbook comes with a digital download, a 4K disc, and a standard Blu-ray Disc and doesn’t disappoint in either video or audio quality. However, perhaps the most important thing to take away from this set is that the movie still stands the test of time.

In 1943, Allied forces were engaged in a bitter war with Japan.  With casualties on both sides, the pressure was mounting as were POWs.  On a small island in Thailand, a new batch of British POWs arrive at a detention camp where they are told they will build a railroad bridge.  When their commanding officer, Colonel Nicholson (Alec Guinness; Star Wars: A New Hope) refuses to make his officers do manual labor, he is shut away in “the oven” (a metal box exposed to the sun’s rays) until Colonel Saito (Sessue Hayakawa; The Cheat) relents and gives control over building the bridge to Nicholson.  However, when allied forces are dispatched to destroy the newly completed bridge, things don’t go according to plan.

Guinness, William Holden (Stalag 17), Jack Hawkins (Lawrence of Arabia), and Geoffrey Horne (Big Daddy) make up the key players in a group of talented actors.  Guinness’ proper British demeanor and sense of decorum make his Nicholson the perfect foe for the Japanese Colonel Saito.  Holden, as the American POW, resigned to his fate, offers a counterpoint to Nicholson’s optimism.  Horne, though cast in a smaller role as the voice of reason, remained with me after the film was over.

Director David Lean (Lawrence of Arabia) had a unique eye for aesthetics which served him well on the set.  There is a reason he was nominated for seven Best Director Academy Awards (winning two) and his style is never more apparent than on the set of one of his Oscar-winning films, The Bridge on the River Kwai.  The juxtaposition of the beauty of the landscape with the hard labor and horrible conditions the POWs endured is a striking contrast.

For a movie that is sixty-five years old, it doesn’t visually or aurally seem like it. The video is upgraded to Dolby Vision and Sony Pictures should be commended for doing such a terrific job.  The film is bright and the details are sharp. The Dolby Atmos audio tracks are clean and it is really impressive when you can hear the blast of a train horn make its way across your living room as it moves from speaker to speaker.  The Blu-ray houses a number of interesting extras, including Crossing the Bridge: Picture-in-Picture Graphics Track, Making of The Bridge on the River Kwai, The Steve Allen Show with William Holden & Alec Guinness, The Bridge on the River Kwai Premiere Narrated by William Holden, “Rise and Fall of a Jungle Giant” Featurette, USC Short Film Introduced by William Holden, An Appreciation by Filmmaker John Milius, Photo Gallery, and Theatrical Trailers.

I love that the production companies are taking the time and effort to restore older films that were magnificent when they were first released and are now classics.  The enhancements are wonderful and these special editions, while giving the studios some additional cash flow, are a treat for those of us who appreciate all kinds of films and the talent it took to create them originally, as well as the handwork put into restoring them for generations to come.