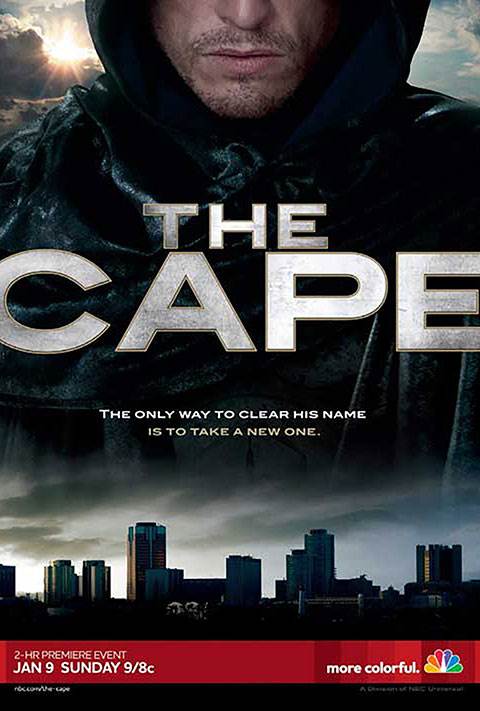 "The Cape" is a one-hour drama series starring David Lyons ("ER") as Vince Faraday, an honest cop on a corrupt police force, who finds himself framed for a series of murders and presumed dead. He is forced into hiding, leaving behind his wife Dana (Jennifer Ferrin, "Life on Mars") and son, Trip (Ryan Wynott, "Flash Forward"). Fueled by a desire to reunite with his family and to battle the criminal forces that have overtaken Palm City, Vince Faraday becomes "The Cape" - his son's favorite comic book superhero - and takes the law into his own hands.

Rounding out the cast are James Frain ("The Tudors") as billionaire Peter Fleming, The Cape's nemesis who moonlights as the twisted killer Chess; Keith David ("Death at a Funeral") as Max Milani, the ringleader of a circus gang of bank robbers who mentors Vince Faraday and trains him to be The Cape; Summer Glau ("Terminator: The Sarah Connor Chronicles") as Orwell, an investigative blogger who wages war on crime and corruption in Palm City; Dorian Missick ("Six Degrees") as Marty Voyt, a former police detective and friend to Faraday; Martin Klebba ("Pirates of the Caribbean") as Rollo, member and unassuming muscle of the circus gang of bank robbers; and Vinnie Jones ("Lock, Stock and Two Smoking Barrels") as Scales, resident thug and cohort of The Cape's nemesis Chess.

Stream The Cape in Digital HD/4K from the AppleTV store.

The Cape images are © Universal Pictures. All Rights Reserved.


Chad Lindberg Discusses The Cape, Supernatural, and More  2/4/2011 4:17 PM EST
FlickDirect had a chance to interview Chad Lindberg.  Chad is on the circuit due to his role in the forth-coming, I Spit On Your Grave, remake, and his upcoming appearance as a bad guy in NBC's superhero show, The Cape. I Spit on Your Grave is an ultra-violent, perhaps 'torture-porn' remake of a 1978 movie wherein a woman is attacked and repeatedly raped by four hillbillies.  Chad plays the mental...  More>>

Chad Lindberg Guest Star's on NBC's The Cape on February 7th, 2011  2/1/2011 2:20 PM EST
Chad Lindberg will guest-star as "Hicks" in an episode of NBC's The Cape entitled "Goggles and Hicks" at 9:00 p.m. on Monday, February 7 and on Tuesday,    February 8 Anchor Bay Entertainment will release the unrated grindhouse revenge film I Spit on Your Grave starring Lindberg, on Blu-ray™ and DVD, announced talent manager Beth McIntosh of Chaotik. Goggles and Hicks tells the tale of a team of t...  More>>