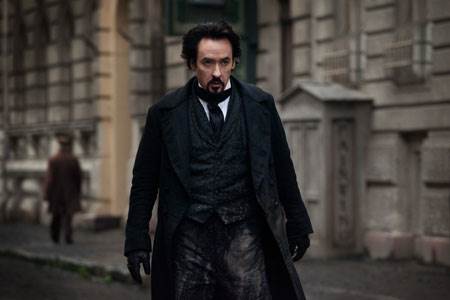 In this gritty thriller, Edgar Allan Poe (John Cusack, Being John Malkovich) joins forces with a young Baltimore detective (Luke Evans,Immortals) to hunt down a mad serial killer who’s using Poe’s own works as the basis in a string of brutal murders. Directed by James McTeigue (V for Vendetta, Ninja Assassin), the film also stars Alice Eve (Sex and the City 2), Brendan Gleeson (In Bruges) and Oliver Jackson-Cohen (Faster).

When a mother and daughter are found brutally murdered in 19th century Baltimore, Detective Emmett Fields (Luke Evans) makes a startling discovery: the crime resembles a fictional murder described in gory detail in the local newspaper—part of a collection of stories penned by struggling writer and social pariah Edgar Allan Poe. But even as Poe is questioned by police, another grisly murder occurs, also inspired by a popular Poe story.

Realizing a serial killer is on the loose using Poe’s writings as the backdrop for his bloody rampage, Fields enlists the author’s help in stopping the attacks. But when it appears someone close to Poe may become the murderer’s next victim, the stakes become even higher and the inventor of the detective story calls on his own powers of deduction to try to solve the case before it’s too late.

Download The Raven in Digital HD/4K from the iTunes store. 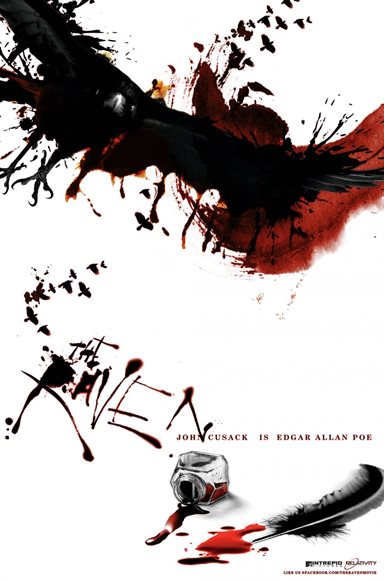 Methodically delivered The Raven provides a suspense mystery that chills and thrills.  Set in the mid 1800's the Edgar Allan Poe based story has all the earmarks of a winning box office weekend.  With excellent direction controlling fine actors and a sold script, the film moves to the top of my best of 2012.

The storyline involves a serial killer that follows the works of Poe (John Cusack) in the staging of his deathly crimes.  From the slicing of the bladed pendulum (The Pit and the Pendulum) to being buried alive (The Premature Burial) and a masked horseman running rampant in a party (The Masque of the Red Death) gruesome headlines continue to blaze in Maryland's biggest city.  Poe, very disturbed over the brutal killings, joins forces with the local police detective Emmett Fields (Luke Evans) to help solve the mystery and catch the perpetrator of the ghastly murders.  When Poe's romantic interest Emily (Alice Eve) gets kidnapped, things start to escalate pushing for a quick resolve.

Staged much like the Sherlock Holmes films with a dark mystery unfolding, The Raven moves along at an enjoyable pace.  Director James McTeigue (The Matrix Trilogy) keeps his story shocking yet intriguing with several references to a handful of Edgar Allan Poe's works using his fine acting team to solve the crimes of a sadistic serial killer.  Doing an excellent job of bringing the mid 1800's Baltimore to life with great sets and costumes, the story of fiction feels almost historical and biographical.

A perfect choice for Poe in looks and demeanor, John Cusack works his character into a frenzy trying to come to the bottom of the grizzly crimes fashioned from his short stories and poems.  Resembling old photos of Poe, Cusack tips many alcoholic libations, questions witnesses and faces danger on the way to confronting the killer.

In support Luke Evans plays the adamant detective Fields to perfection with swagger, determination and realism. With Cusack the two are an American Holmes and Watson yet reversing roles from time to time.  Giving the film a little flavor and fancy, Alice Eve as Emily takes on the damsel in distress getting her into the thick of the action.  With measurable semblance to Lenore she crafts the love interest from Poe's poem The Raven into her character for extra nostalgia.  Her performance as the buried alive Emily creates some intense moments that keep your heart racing.

The Raven has been rated R for bloody violence and grisly images, but not too much more than Sherlock Holmes.  Although it does not have the intense explosive action of the Holmes's films this one sticks more to the mystery and gore of it all.