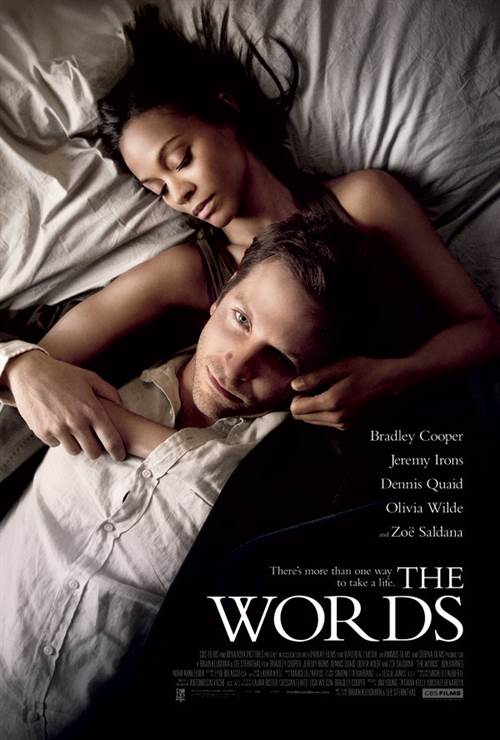 When shallow wannabe-writer Rory Jensen (Bradley Cooper) finds an old manuscript tucked away in a bag, he decides to pass the work off as his own. The book, called "The Window Tears," brings Rory great acclaim, until the real author (Jeremy Irons) shows up and threatens to destroy Rory's reputation. Cut to Clayton Hammond (Dennis Quaid), a writer whose popular novel "The Words" seems to mirror Rory's story, leading to speculation that the tome is Hammond's thinly veiled autobiography.

Download The Words in Digital HD/4K from the iTunes store.

The Words images are © CBS Films. All Rights Reserved. 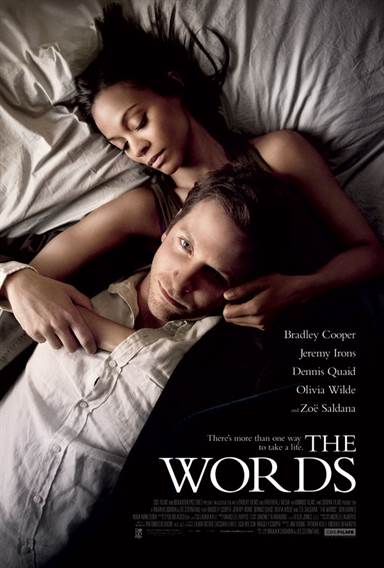 Compelling and complex the film The Words reaches for a drama loving audience that will enjoy a touching romance intertwined with an engrossing story. The film has excellent performances by the whole cast and directors Brian Klugman and Lee Sternthal work through the intricate script providing very good entertainment.

The film finds Rory Jansen (Bradley Cooper) stuck for a substantial novel following a couple of failures.  Keeping above water with the help of his father's money, Rory finds himself moving toward a depressive state of mind.  His wife Dora (Zoe Saldana) yearns for a good life and starts to grow away from her husband and his vision.  Rory decides that the best way to get his mind off of the negative aura he has developed is a trip to France.

While there, Dora sees a worn briefcase in a store called Hemmingway's and buys it for Rory hoping it will inspire him to write.  Rory finds an old frayed manuscript in the binding of the briefcase and copies it into his laptop.  One night Dora reads the book and thinks its Rory's newest novel.  Showing her excitement for him, Rory doesn't tell her his secret.  Upon Dora's urging, he shows the book to one of the publishing representatives where he works and Rory signs a contract with him to publish the book. After the book becomes an instant success an Old Man (Jeremy Irons) initiates a chance meeting with Rory.

Cooper does a great job playing the young author with writer's block.  His charm and charismatic energy lend well to his character and the plot.  Working with drama great Jeremy Irons as the Old Man, the two develop appealing characters who strike up an interesting friendship that turns into a poignant debate between right and wrong.  The Old Man lures Rory into admitting his wrong doing, pinning him down with an overwhelming choice that will either break the young man or make him a hero.

Saldana does a good job creating Dora, an enticing woman with a romantic outlook on life.  Keeping Rory on a tight leash she pushes him for the success that will make her happy.  Adding excellent support to the film, Denis Quaid shows he still has the capability of a sophisticated look that brings an air of refinement to the writer of the The Words. He's the storyteller here and the one who spins the intrigue.

But two other characters are the standouts and they are the lovers in the book within the screenplay of The Words. Ben Barnes as the Young Man and Nora Arnezeder as his wife Celia bring the romance into the film and steal the show with knock-out performances.  The two pour out the chemistry showing a realistic love for each other and developing a relationship that endures until a tragic loss separates them. I like the way directors Brian Klugman and Lee Sternthal frame each of the scenes with settings that imbue romance as much as the characters within them.

Klugman and Sternthal, writers of this script (and Tron:Legacy), make this film their first directing gig and as difficult and complex the film, they make it look easy.  Giving the audience a lot to think about, creating intrigue and flashing romance into each of the three sequences, the two directors work their magic through to the touching finale.

The film has been rated PG-13 for brief strong language and smoking.  Even though The Words is directed at a female market, most romantic men should enjoy the moment with their partners.

FINAL ANALYSIS:  An intricate puzzle that fits perfectly together. (B)