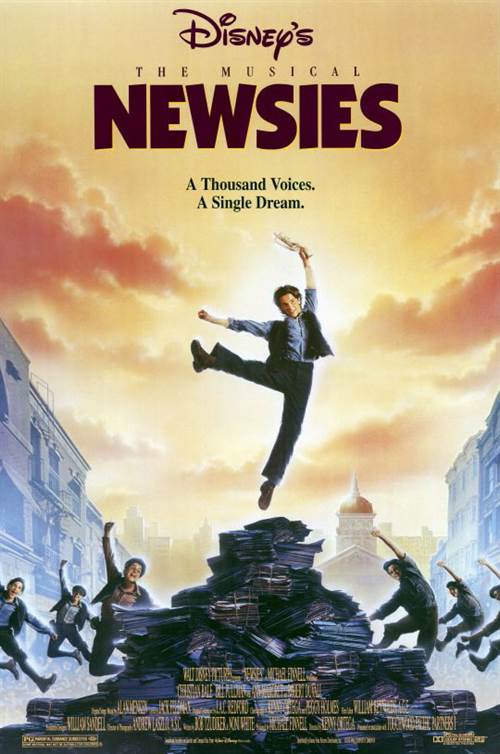 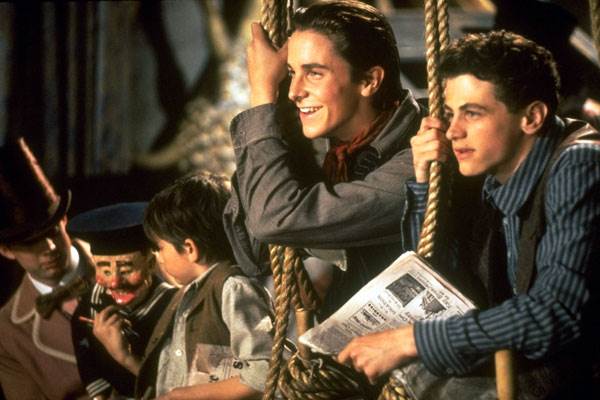 Stream Newsies in Digital HD/4K from the AppleTV store. 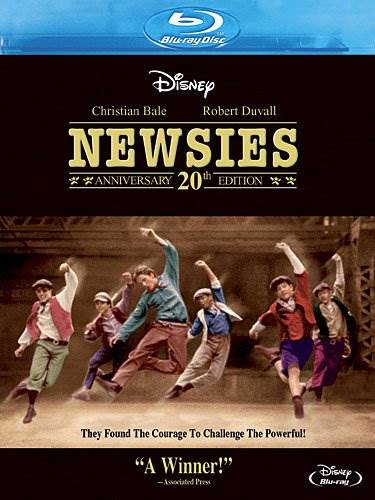 Newsies' history as a film is as unlikely as that of its titular heroes. The biggest live action flop in Disney's history (at the time), it steadily built a devoted following on home video until it not only recouped its costs, but also spawned a hit stage musical that is currently filling the house on Broadway (and, like most successful musicals, can look forward to a profitable national tour). Like the determined newsboys for whom hawking papers is a matter of basic survival, Newsies won't take "no" for an answer.

Newsies' initial failure at the box office can be seen as a matter of timing. Its style was a throwback to an earlier era of movie musicals with all the artificiality of back lot decor, stylized choreography and the directness with which characters burst into song. The film's eventual success among an ever-expanding cult of loyalists is a tribute to the skill with which director Ortega and his cast and crew implemented that style, so that, for anyone who chooses to enter into the spirit of the thing, the film works at multiple levels. Star Christian Bale, who was a teenager when he made the film, has been quoted as follows: "You say something bad about Newsies, and you have an awful lot of people to answer to."

Newsies has almost too much plot. Several storylines overlap and interweave to the point where the film just barely manages to contain all of them. The overarching storyline concerns the effort by publisher Joe Pulitzer (Robert Duvall) to squeeze even more profit out of his successful newspaper, the New York World. Pulitzer's underling, Jonathan (Mark Lowenthal), recognizes that they can't extract more profit from customers by raising the price, but they can charge more to their distributors. Another senior executive, Seitz (Charles Cioff), counsels against this maneuver, but Pulitzer loves the idea.

This was the era before newsstands and home delivery. The principal mode of distribution for newspaper publishers in New York City, including Pulitzer and his chief rival, William Randolph Hearst, are "newsies"—independent paperboys, all of them poor, many of them orphans, who line up every day (several times a day, if there are multiple editions), and buy papers to flog to customers from the distribution manager, Weasel (Michael Lerner). At Jonathan's suggestion, Pulitzer has Weasel raise the price charged to newsies by a tenth of a cent per paper. Now Pulitzer has his bigger profit, but the kids who were barely scraping by have to figure out how to sell even more papers just to stay even. The result is a strike by the newsies, and a standoff between a mob of "have not" teenagers and the city's richest and most powerful tycoon.

Newsies' second plotline is the personal odyssey of Jack Kelly (Christian Bale), the organizer of the strike. Jack is a classic American hero: brash, self-made and also something of an outlaw. It turns out he's on the run, having escaped from a reform school run by a corrupt warden, Snyder (Kevin Tighe). But Jack is also the yearning soul of Newsies, and half an hour into the film Alan Menken gives him what has come to be known as the "I want" song that occurs in all Disney musicals since Ariel sang "Part of That World" in The Little Mermaid. Here the song is called "Santa Fe", which is where Jack longs to go, for the wide open spaces and the romance of the Old West. At the moment, though, Jack has to stay and lead the newsies, especially in difficult tasks like venturing into the scary wilds of Brooklyn to negotiate an alliance with Spot Conlon (Gabriel Damon), the short but intimidating leader of the town's toughest newsie gang.

The third plotline concerns David Jacobs (David Morrow, whom you will recognize as the younger version of Tom Hanks in Big) and his little brother, Les (Luke Edwards), who have just started as newsies to help support their family, because their father (Jeffrey DeMunn) was laid off after an on-the-job injury. Jack takes them on as apprentices for purely mercenary reasons: Les has an angelic face that's a great marketing tool. Through David's eyes, because he's fresh to the scene, we get the least romantic perspective on a newsie's life, as he watches Jack and others struggling to make a living with no one to look out for them. Everyone else, including colorful characters like Racetrack (Max Casella), Crutchy (Marty Belafsky), Boots (Arvie Lowe Jr.) and Mush (Aaron Lohr), just takes the newsie's daily grind as normal life. It's also David who shows Jack what it's like to be part of a family. Of special interest to Jack, when David and Les bring him home to dinner, is their sister, Sarah (Ele Keats).

Two additional characters weave in and out of the proceedings. One is a chipper lady named Medda Larkson (Anne Margaret), who owns a vaudeville house and performs there nightly. She's a friend to the newsies and to Jack in particular, always willing to shelter him from the authorities. The other key character is a reporter for the New York Sun named Denton (Bill Pullman), a former war correspondent who knows bravery when he sees it. Denton is instrumental in getting wider attention for the newsies' battle with Pulitzer. Eventually the story reaches all the way to the state capital in Albany.

With so many characters and so much plot, it's a credit to director Ortega (and to editor William Reynolds) that Newsies manages to hang together, keep driving forward and even accommodate elaborately choreographed production numbers, the likes of which have rarely been seen since. One of the reasons the film did better on home video than on the big screen may be that the smaller screen camouflaged the fact, which was inescapable on the big screen (and also on Blu-ray), that these musical extravaganzas are playing out on backlots and soundstages. Despite extensive historical research by the production team, Newsies doesn't have a single set that feels like a real place. It's a stylized, artificial world, done like an old Hollywood musical.

By 1992, audiences were no longer comfortable with that style, except in animation, and arguably that hasn't changed today. It will be interesting to see how Newsies plays to new viewers in this Blu-ray edition, which effectively recreates the original experience in a manner that hasn't been possible until now.

A 20th Anniversary Edition Blu-ray has been released by Disney, the video and audio quality transfer well even with the production of the film of itself still looking "staged". As for special features, there are some interesting ones here, all included on one disc. Starting off we have commentary from the director, writers and choreographers, then two features of behind-the-scene footage: one hosted by some Disney "tweens" with footage from on set and the other with interviews and footage of the adult cast. The last 3 features are an interesting look at the actual strike by the newsies with interviews from credible historians, a look at how the film went from storyboard to scene and lastly a sing-a-long feature.

This Blu-ray is an easy choice for a Newsies fan. The film has never looked this good, and Disney is unlikely to revisit it any time in the near future. For someone new to the film, you may want to rent it first. It is very much a "love it or hate it" kind of classic. It's your choice not to like it, but just remember Christian Bale's warning not to say anything bad about it. Remember—he's Batman.