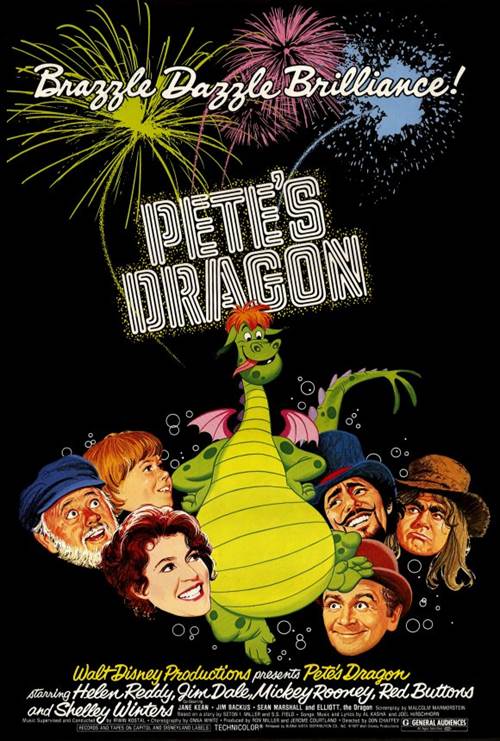 The endearing story between Pete and his invisible dragon friend Elliott as they develop a special bond and share a magical friendship. With memorable characters and heartwarming songs including the 1977 Academy Award® “Best Original Song” nominee, “Candle On The Water”.

Stream Pete's Dragon in Digital HD/4K from the AppleTV store. 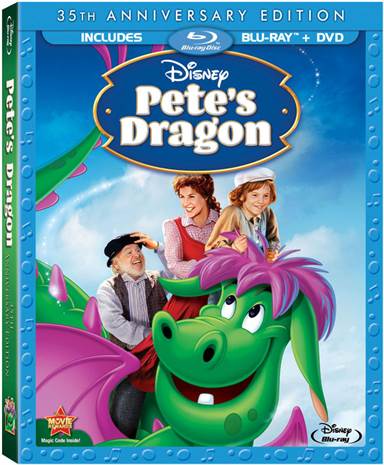 As a child, there were four films in constant rotation in my life: Return of the Jedi, The Secret of NIMH, The NeverEnding Story and Pete's Dragon. There were other movies scattered about as well. Some beloved, some not-so-beloved. But none were worn more ragged, none were more treasured, none more committed to memory than those four. In the years since, all have been never been far from my mind. Return of the Jedi is still a personal Star Wars favorite, geekdom be damned. The Secret of NIMH is a dark delight, still as haunting, exhilarating and artfully crafted as it was in 1982. And The NeverEnding Story remains a wondrous and absorbing fantasy, even some twenty-eight years after Bastian first soared over Fantasia. But Pete's Dragon?  That is a film that, after returning to it now, has lost much of its luster. Nostalgia can only weather so many storms, especially when it hasn't been properly maintained.

On the run from the horribly abusive Gogan family, a young orphan by the name of Pete (Sean Marshall) is rescued by a massive creature that can breath fire and turn invisible whenever necessary; a kindly dragon Pete calls Elliott (Charlie Callas). The two become fast friends over apples and a song, and Elliott continues to watch over Pete, largely unseen, as the boy is taken in by a no-nonsense woman named Nora (Helen Reddy) and her tipsy father Lampie (Mickey Rooney) in the small seaside town of Passamaquoddy. But while Lampie catches a glimpse of Elliott, Nora isn't about to accept that dragons exist on the say-so of a lonely orphan and the town drunk, even if that town drunk happens to be her dear ol' dad. What follows unfolds rather predictably, with Pete bonding with Elliott and growing irritated with his new pal's invisible antics, Lampie attempting to convince the locals of his discovery, and a pair of traveling snake oil-type salesman, Dr. Terminus (Jim Dale) and his right-hand con man Hoagy (Red Buttons), working every angle to take full advantage of the entire situation, dragon or no.

Quite thin by any standard yet undeniably bloated at 129-minutes, the story, script and sheer amount of musical numbers are the real villains of this film. The TV version may have be inferior but its producers had one thing right: the movie tends to drag. And the actors, lovable and enthusiastic as they are, aren't working with the kind of material that justifies such blazing smiles, eager delivery and boisterous musical numbers.

And yet in spite of all the obvious issues that any cynical adult is sure to notice, Pete's Dragon performed its time-warping magic as only a childhood favorite can. Sometimes it was little more than the opening bars of a song. Other times it was just watching scruffy haired Sean Marshall and Elliott interact, which would suddenly and viscerally exhume long buried wonder. Nostalgia is as blinding as it is binding, but there isn't anything to be gained from completely divorcing nostalgia from catalog children's films. Pete's Dragon won't have much success casting its spell on most 21st century kids, nor will it attract many newcomers beyond Disney completists. It will, however, appeal to kids of the '70s and '80s, now well into their thirties and forties, looking to reconnect with old memories and relics of childhood or introduce their children to bright, bubbly family films from a simpler age.

Pete's Dragon has been granted new life courtesy of Disney's polished and proficient video transfer. While the audio track isn't so much a commanding audio presentation as it is a commendable one. As for special features and extras, we've got one titled Brazzle Dazzle Effects: Behind Disney's Movie Magic: Actor Sean Marshall, all grown up and hosting the first of three special features, discusses the history of Disney special effects, live- film/animation hybrids, and other tricks of the Pete's Dragon trade. Terminus & Hoagy Hunt Elliott: A deleted sequence comprised of storyboards and voicework. "Boo Bop Bopbop Bob (I Love You Too): The original song's concept storyboard reel and Trailers: Two Pete's Dragon trailers round out the package.

Pete's Dragon will work its magic on anyone nostalgic enough to be susceptible to its tricks, but as a Disney classic, a kids film or even a family musical, it's too bloated and ungainly for its own good. My inner child came out to play; but the cranky critic kept glancing at his watch.