Dr. Ryan Stone (Sandra Bullock) is a medical engineer on her first shuttle mission. Her commander is veteran astronaut Matt Kowalsky (George Clooney), helming his last flight before retirement. Then, on a routine space walk, disaster strikes -- the shuttle is destroyed, leaving Ryan and Matt stranded in deep space with no link to Earth and no hope of rescue. As their fear turns to panic, they realize that the only way home may be to venture further into space

Download Gravity in Digital HD/4K from the iTunes store. 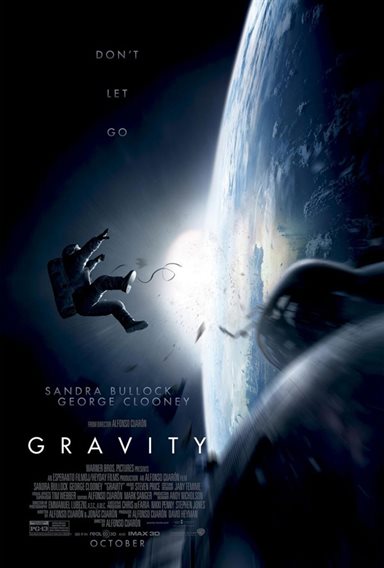 Breathtaking, mesmerizing and thrilling the movie Gravity explodes on the screen generating a feast of cinematic brilliance.  In 3D IMAX the film will have you floating in space then spinning out of control while you are gasping for air as you try clinging to anything solid, followed by the taste fear of being alone. Fine direction, believable acting and an amazing view of earth and the void of space makes Gravity a must see.

The film opens focusing on a small dot in the sky where as it draws closer we hear western music with the space shuttle coming into sight.  The view from space is breathtaking with Earth in the background as lead astronaut Matt Kowalski (George Clooney) comes into camera shot harnessed to his jetpack moving about the exterior of the shuttle.  He addresses astronaut Ryan Stone (Sandra Bullock) who's also outside the shuttle attached to the Hubble telescope where she's adjusting the computer boards for an upgrade.

The atmosphere in space can go from 250 degrees above to 150 degrees below zero when the sun's rays get blocked by Earth so it's imperative that Stone finishes her job before darkness sets in.  Kowalski checks on her progress and asks her if she has recovered from the illness she suffered in the launch. Just as she starts to answer him Kowalski gets a call from Earth base that the Russians have terminated one of their satellites using a missile strike causing a massive debris field headed their way.  When the debris starts to tear apart the space shuttle it puts Kowalski and Stone in a race to stay alive.

What makes the film extremely tense and terrifying is the position the astronauts find themselves.  Director Alfonso Cuaron (Harry Potter and the Prisoner of Azkaban) works the situation creating the emotional helplessness of the space walkers floating in the void, their impending trek to try and save their lives, and each attempt becoming an impossible chance for survival.  He makes space, the shuttle and space stations part of the small cast keeping his audience intrigued with the spectacle before them.

Both Bullock and Clooney fill their roles extremely well showing a myriad of emotions from fright and panic to dread and despair.  Bullock keeps her character in panic mode following her separation from the shuttle by space debris.  Alone in space she starts to accept her fate slowly losing her grip on the impossible situation.  It's the veteran Kowalski who faces the situation as routine trying to keep Stone from succumbing to the vastness of the uncontrollable elements in which she finds herself. The two actors are perfectly matched for the film and they do their jobs as if they had been real space travelers before taking on their roles.

Cuaron uses every outer space CGI visual effect in the book to give his audience the feeling they are floating with the astronauts while they drift in the expansive void with nothing to hold onto except the tether between them.  Way above the Earth with only a slight chance of getting to a Russian or Chinese space station, I found myself getting mesmerized by the spinning, twisting, bouncing and thrust from the jetpack in the zero gravity. Upon getting up to walk out of the theater I could feel the effect of gravity pulling me down, it was that hypnotic an experience.

The film Gravity comes to the screen with a premise that's not too far from reality.  The movie by Alfonso Cuaron gains a lot of credibility from the recent documentary called Space Junk 3D where in fact there's been actual debris accidents that have been a nuisance in space. The film that's now available on Blu-ray or DVD shows the rings of debris and satellites circling the earth, some of which have been damaged by parts of trajectories that have carried them and astronauts into space.  Not all that science fiction, the ordeal that Cuaron's characters go through just may be a future calamity waiting to happen.

Gravity has been rated PG-13 for intense perilous sequences, some disturbing images and brief strong language.  It is best seen in 3D IMAX providing the finest visual treat that the film has to offer.  At least 50% of the film is the visual aspect so treat yourself to the full experience. Also available in 3D and 2D at most theaters.

FINNL ANALYSIS: A very good film that had me gasping for air. (A)

gcaruso
I watched it at home in 3D and I must say a very stimulating special effects show. Visually satisfying. Suspenseful.
2/4/2015 8:48 AM EDT