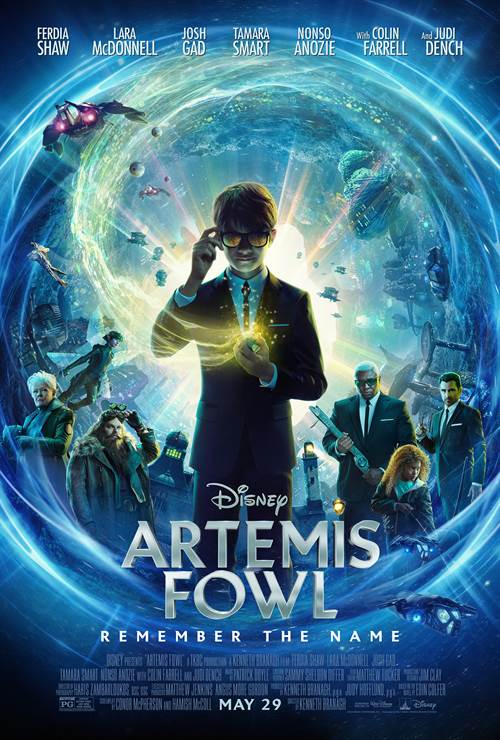 Disney’s “Artemis Fowl,” based on the beloved book by Eoin Colfer, is a fantastical, spellbinding adventure that follows the journey of 12-year-old genius Artemis Fowl, a descendant of a long line of criminal masterminds, as he seeks to find his father who has mysteriously disappeared. With the help of his loyal protector Butler, Artemis sets out to find him, and in doing so uncovers an ancient, underground civilization—the amazingly advanced world of fairies. Deducing that his father’s disappearance is somehow connected to the secretive, reclusive fairy world, cunning Artemis concocts a dangerous plan—so dangerous that he ultimately finds himself in a perilous war of wits with the all-powerful fairies. “Artemis Fowl” is directed by Kenneth Branagh and stars Ferdia Shaw, Lara McDonnell, Josh Gad, Tamara Smart, Nonso Anozie, Josh McGuire, Nikesh Patel and Adrian Scarborough, with Colin Farrell and Judi Dench. Kenneth Branagh, p.g.a. and Judy Hofflund, p.g.a. are producing with Angus More Gordon and Matthew Jenkins serving as executive producers. Conor McPherson and Hamish McColl wrote the screenplay. Disney’s “Artemis Fowl” opens in U.S. theaters on May 29, 2020.

Listen to the Artemis Fowl soundtrack on Apple Music.


Artemis Fowl Coming to Disney Plus June 12  4/17/2020 11:58 AM EST
"Artemis Fowl", Disney's new live-action film, is set to begin streaming exclusively on Disney plus beginning Friday, June 12.Be sure to check out this fun family film, based on the best-selling young adult book by Eoin Colfer. "Artemis Fowl" delivers a big cinema-sized experience for audiences of all ages to experience for the first time on Disney+ in the comfort of their homes.  From director Ke...  More>>

Artemis Fowl to Premiere Exclusively on Disney Plus  4/3/2020 2:51 PM EST
The Walt Disney Studios has announced that they will be premiering their film "Artemis Fowl" exclusively on Disney+."With audiences largely unable to attend theatres in the current environment, we are thrilled to offer the premiere of ‘Artemis Fowl' on Disney+," said Ricky Strauss, President, Content & Marketing, Disney+. "Director Kenneth Branagh and his spectacular cast take viewers right into t...  More>>