After a mysterious, lost night on their honeymoon, a newlywed couple finds themselves dealing with an earlier-than-planned pregnancy. While recording everything for posterity, the husband begins to notice odd behavior in his wife that they initially write off to nerves, but, as the months pass, it becomes evident that the dark changes to her body and mind have a much more sinister origin.

Download Devil's Due in Digital HD/4K from the iTunes store.

Devil's Due images are © 20th Century Studios. All Rights Reserved. 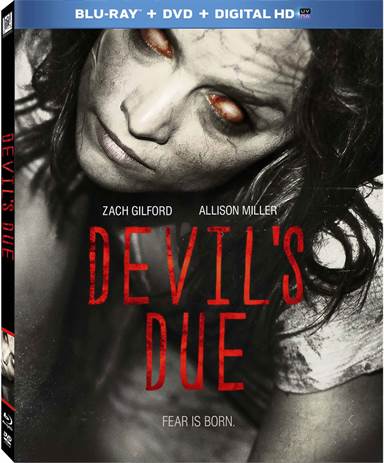 The Devil's Due, starring relatively unknowns Zach Gilford and Allison McCall, was filmed in a manner that to say the least is not my favorite—found footage. The film reminds me of Paranormal Activity and The Blair Witch Project, although it is thankfully a little less shaky than the latter. Shot on what is supposedly home video and hidden cameras, the film has the same feel of the other two with parts of the storyline seemingly ripped from Rosemary's Baby.

In the film, Zack and Samantha, a young couple, film everything in their lives: their engagement, wedding, honeymoon, and so on. It is on their honeymoon that they travel to the Dominican Republic and blindly follow their taxi driver to a secluded location where there is a party. They wake up the next day not knowing how they got back to their hotel room and rush to catch a plane for home. A few weeks later, Samantha (McCall), finds that she is pregnant despite swearing that she never forgets her pill.

As her pregnancy progresses, Samantha's behavior seemingly becomes more and more bizarre and violent, with Samantha responding to any perceived threat to her or her baby with unexplained strength. As for bizarre, it continues with a scene in which you see her eating raw meat at the grocery story (reminiscent of Rosemary's Baby) which is supposedly caught on camera by the grocery store's hidden cameras. Enter the mysterious neighbors, who are caught watching the house with their own hidden cameras and found staring at the house for no apparent reason. Next up is the local priest having a physical reaction to Samantha's presence during a church service, and a glimpse of the taxi driver sitting watching the service. The whole film progresses until the baby is ready to be born into a bloody mess and the husband being questioned by the police (which is also how the film opens).

There is not much to draw you into the film and the storyline just doesn't flow well so that you feel scared or that interested. The DVD box cover has a comment, "Very, Very Scary," on the cover, but it's more gory than scary at the end.

The Blu Ray itself has standard film quality; again, for myself, it was hard to watch as I just do not like films with a home movie quality to them. There are the standard deleted scenes and extended footage with an alternate ending. There is also a commentary by the film's director and producers, which may have been more interesting had the movie itself not been so bad. They even discussed using iPhones for some of the film footage, and handing over the cameras to the actors for some of the filming. It was a creative way to film, but for the lack of success in the end result. Instead, the director and his "friends" came across like beer buddies who decided to make a film together. To add to it, some of the extra features were pranks they pulled on each other as part of the comedy group they belonged to.

Overall, the movie was just not unique enough or interesting enough to be on the same level as a The Blair Witch Project, whose success they clearly hoped to mimic.