Home / Movie Database / If I Stay Mia Hall (Chloë Grace Moretz) thought the hardest decision she would ever face would be whether to pursue her musical dreams at Juilliard or follow a different path to be with the love of her life, Adam (Jamie Blackley). But what should have been a carefree family drive changes everything in an instant, and now her own life hangs in the balance. Caught between life and death for one revealing day, Mia has only one decision left, which will not only decide her future but her ultimate fate. “If I Stay” is based on the best-selling novel of the same name.

Purchase DVD/Blu-ray/4K UHD physical copy of If I Stay today at Amazon.com

Download If I Stay in Digital HD/4K from the iTunes store.

If I Stay images are © Warner Bros.. All Rights Reserved.

If I Stay Blu-ray Review 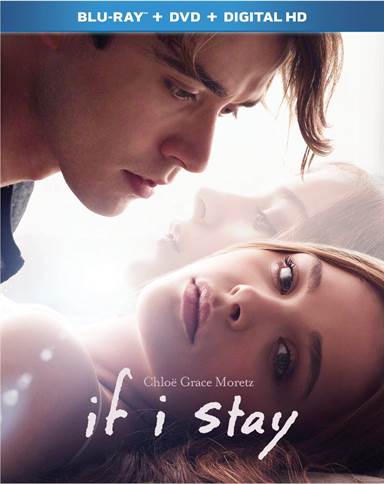 In the continuing trend of making popular young adults books into movies, If I Stay has been made into a major motion picture, which is out now on Blu-ray and DVD.  The novel, written by Gayle Forman (Just One Year) is a heart-wrenching story sure to make even the coldest of people feel a multitude of emotions.  You would be hard pressed to find anyone who wouldn't cry at some point during the film. Told in a series of alternating scenes between the present and the past,  If I Stay  flips between joy, happiness and humor and tear shedding sorrow.

Starring Chloe Grace Moretz (Carrie, Kick-Ass) as Mia, the movie tells the story of her navigation through "teenagedom", struggling to fit in, even within her own family, and her sexual awakening with the discovery of first love.  Mia's world is turned upside down after a tragic car accident claims the lives of her parents and younger brother and leaves her hanging "in between worlds".   Mia spends much of the movie in an "out of body experience " watching everything around her, helpless to communicate.

Supporting cast members include Jamie Blackley (The Fifth Element) as Adam, a rock band lead singer and guitarist who pursues Mia after watching her play cello and Liana Liberato (The Best of Me) as Mia's best friend, Kim.  Mia's cool, rocker parents are played by Joshua Leonard (CSI:Miami) as Denny and Mireille Enos (World War Z) as Kat. Stacy Keach  (Mike Hammer, Private Eye) plays Mia's grandfather who, in my opinion, had the most tear-jerking scene in the whole film.  The cast does a great job especially Moretz, who surprised me as a more than adequate cello player, and Blackley, who also has musical talent and did a wonderful job portraying Adam as equal parts rocker cool and sensitive young man.

The Blu-ray extras include two music videos and music commentary by Director R.J. Cutler (Nashvile).  It also has "beyond the page" featurettes including a fascinating look at the music in the movie as it's own character called "The Love of Music" and how If I Stay was adapted from book to feature film.  The segments including deleted scenes and the still gallery don't add much to the extras and could be skipped.

I was reluctant to see this film as I knew a little about the subject matter and didn't want to watch a sad story.  I was pleasantly surprised to find I enjoyed it for the most part. I liked the sweet moments between Mia and Adam and the true, real friendship Mia and Kim had.  I was interested in the typical "high School" story that had a little more to it and even found myself engrossed in the life or death plot, despite the sad nature.  I think Moretz and Blackley had great chemistry and the casting directing did an overall great job.